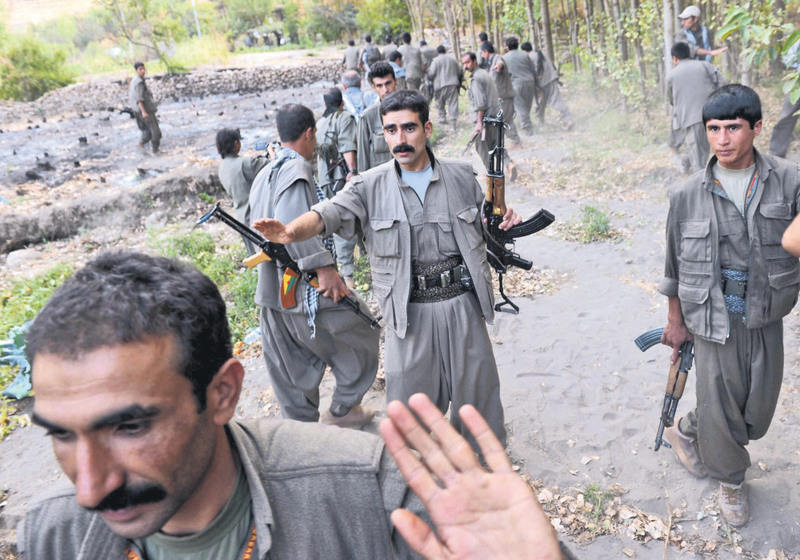 Partners in fighting ISIS, and rivals for leadership of the Kurdish movement, the KRG has urged the PKK to leave the Qandil Mountains where it is headquartered, citing it as KRG territory, and that for the PKK to pursue the reconciliation process it must leave northern Iraq

Masrour Barzani, the chancellor of the northern Iraq's Kurdistan Region Security Council (KRSC) has urged the outlawed PKK to move out of the Qandil Mountains where it has been headquartered since it retreated from Turkey upon a call from the imprisoned PKK leader, Abdullah Öcalan, for a cease-fire. Barzani cited the region belonging to the KRG and said the PKK, which ran afoul of Iraqi Kurds after demanding self-rule for the town of Sinjar, should withdraw from the mountains. "This is Iraqi territory and they must leave," Barzani said. Speaking to Daily Sabah, political analysts drew attention to tense relations between the PKK's Syrian wing PYD and KRG's ruling Kurdistan Democratic Party and stressed that Iraqi Kurds are not only displeased with the PYD's desire to bring together cantons in northern Syrian regions but also prefers to have its oil resources pass through its stable northern neighbour, Turkey.

Masrour Barzani said their reluctance to have the PKK in KRG territory is among the reasons why they underpin Turkey's reconciliation process, which was launched to end the decades-long conflict between the Turkish state and the PKK in 2013. "This is one of the reasons why we are so eager to see the Kurdish peace process inside Turkey succeed. We hope this problem will be resolved peacefully," Barzani said.

The KRG has been one of the most vocal supporters of Turkey's reconciliation process, which is currently on ice due to resistance by the PKK to lay down arms despite a call from Öcalan in his annual Nevruz message for the PKK leadership to convene a congress to discuss abandoning weapons. The KRG's support for the protracted reconciliation process mostly stems from its genial relations with Ankara and also its reluctance to see the PKK in its territory.

Although united in fighting the Islamic State of Iraq and al-Sham (ISIS), which has captured large swathes of Syria and Iraq, the traditional rivalries between Iraqi and Syrian Kurds came under spotlight after the capture of Sinjar from ISIS with joint efforts of the KRG's peshmerga forces and the PKK-affiliated Democratic Union Party's (PYD) People's Protection Units (YPG). Speaking exclusively to Al-Monitor, Barzani said they expected the PKK and YPG to withdraw from Sinjar just like "they did in Kobani."

"Sinjar is a Kurdish territory inside Iraq and the PYD is a guest exactly in the same way that our peshmerga forces were when they went to support them in Kobani, but then returned. It is the expectation of the people of Iraqi Kurdistan that foreign fighters eventually leave and go back to where they came from," Barzani said. The PKK has also been pressuring the KRG to impose a canton in Sinjar, which was responded harshly by the KRG's ruling Kurdistan Democratic Party (KDP) administration as it labeled the efforts disrespectful to the KRG's judicial institutions as well as the people of Sinjar. The KDP said they threatened the sovereignty of the Kurdistan region.

The rivalry between the PYD and PKK and the KRG has deepened since the PKK has been interfering in the domestic affairs of the KRG, targeting its administration. Relations soured when the PKK criticized the failure of peshmerga fighters to effectively fight ISIS. The PKK's laying claims on the leadership of the KRG and vice versa has driven a wedge between the groups.

"The PKK has no role to play. ... Would the PKK be happy if a Kurdish political party inside Iraq meddled in the affairs of Diyarbakır or Mardin?" Barzani asked, expressing unease about PKK involvement in matters that concern Iraq.

Şaban Kardaş, the director of the Center for Middle Eastern Strategic Studies (ORSAM), has spoken on the remarks by Barzani and said it was a blatant message from the KDP asking the PKK to both stay out of the business and territory of the KRG and stick to the reconciliation process in Turkey.

When asked whether Iraqi Kurds would be unsettled about a corridor of Kurdish-controlled territory along the Turkish border, Kardaş said: "If that morphs into a provocative project, [the KRG] would react against it due to its good relations with Turkey. It also would mean handing the representation of the Kurds to the PYD, which would only displease the KDP. Such a belt will bring the PYD to the forefront and builds up the PYD in the region."

Ankara has recently expressed alarm over an extending band of Kurdish-controlled territory, a danger that emerged when the YPG captured the border town of Tal Abyad from ISIS, combining the cantons controlled by the PYD opposite the Turkish border. Intense, continuing clashes that have the possibility of spilling into Turkey and concerns over a costly and protracted refugee situation in Turkey, which is already hosting nearly 2 million refugees, have prompted Ankara to tighten its measures at the borders.

The chairman of Academia of Diplomacy in the Foreign Ministry, Mesut Özcan, has said that "such a belt controlled by the PYD poses a threat against the Kurds close to the KDP," and that is why, he said, the KRG would not support the presence of such a corridor by YPG forces.

"Although they seem to favor the independence of the Kurds, They don't want the PKK to be strong in the region. They would not support the idea of a strong PKK that would [undermine their presence]," Özcan added.

The conflict between the Turkish government and the PKK, considered a terrorist group by Turkey as well as the U.S. and EU, has been ongoing since 1984 and has resulted in some 40,000 to 100,000 casualties as well as major economic losses for Turkey. The PKK, which aimed to establish an independent Kurdistan in southeastern Turkey, has headquartered in northern Iraq's Qandil Mountains since withdrawing from Turkey. The PKK has been expected to abandon arms as part of the reconciliation process the government pursues with the mediator party Peoples' Democratic Party (HDP), but still has not done so, casting doubts over whether it is sincere in conducting the process.
Last Update: Jul 06, 2015 8:15 pm
RELATED TOPICS