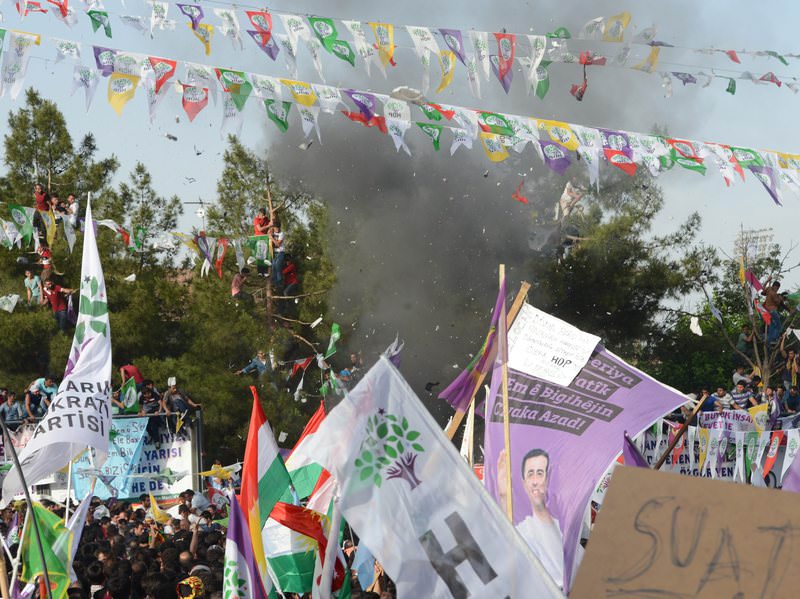 | AA Photo
by Daily Sabah Jul 22, 2015 12:00 am
An alleged PKK confessor said the outlawed terrorist group was the one responsible for two explosions at a pro-Kurdish Peoples' Democratic Party (HDP) rally in Turkey's southeastern province of Diyarbakır in June, killing four and injuring dozens, claims an online news website, karar.com.

The confessor turned himself into Turkish security forces on July 18 and told the officials about what he went through while he was a militant in the outlawed PKK organization, according to a July 22 news report published by karar.com. The website has also released a secret legal document which claims that it belongs to the confessions of the alleged PKK militant.

The fatal blasts had come just two days before Turkey went to the polls on June 7. The government officials had pointed the finger at terrorist DHKP-C organization at the time, whereas the People's Democratic Party (HPD) officials had said, the self-proclaimed Islamic State of Iraq and al-Sham (ISIS) was behind the attacks. But now, it seems that there is a third possibility in the picture, with karar.com, claiming the PKK has carried out the explosions.

The alleged confessor told the officials that the PKK militants first prepared a suitcase loaded with bombs and then planted it at the rally area, karar.com's news report said. The confessor claimed to have witnessed the organization's decisions being made during these processes, according to karar.com.

The confessor claimed to have heard from the PKK militants that "The elections are now a guarantee, our jobs are easier," after the blasts, reported karar.com.