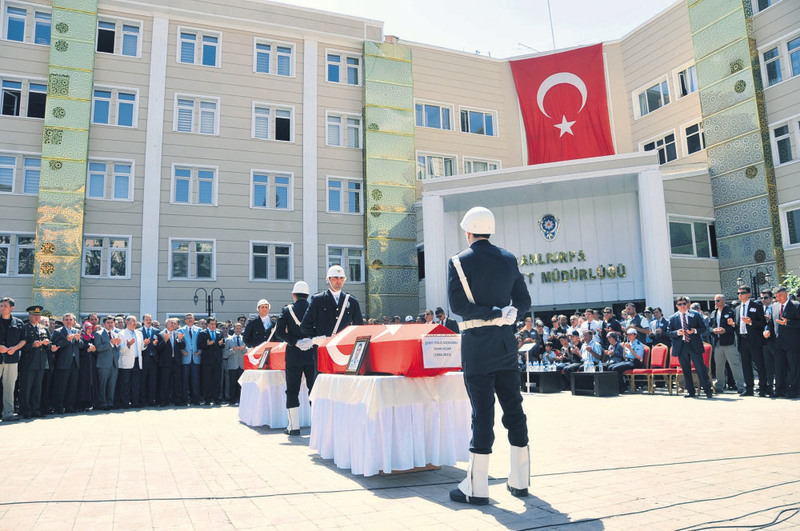 by Daily Sabah Jul 23, 2015 12:00 am
The outlawed PKK killed two civilians and a police officer on Thursday, a day after it claimed responsibility for the killings of two other officers who were found dead at their home on Wednesday, adding to the escalation of violence committed by the militants since the announcement of an end to a cease-fire by senior PKK commanders.

Provincial police counterterror teams detained three suspects on Thursday in the killings of two police officers on July 22 in Şanlıurfa's Ceylanpınar district. The PKK killed the two civilians "for being members of ISIS." Mürsel Gül from Istanbul and Ethem Türkmen from Adana died as result of the attack. Two other officers, Tansu Aydın and Ali Karahan, were also heavily wounded in an attack carried out by the PKK in Diyarbakır province on Thursday. Aydın died at the hospital. The officers reportedly went to the scene of the incident after being informed of a car accident.
Three suspects were detained as part of an investigation launched simultaneously in the Bahçelievler neighborhood, where the officers Feyyaz Yumuşak and Okan Acar lived. The investigation was also conducted in other areas.

The funerals of Yumuşak and Acar were held on Thursday, attended by Interior Minister Sabahattin Öztürk, the head of the national police department Celalettin Lekesiz and Şanlıurfa mayor İzzettin Küçük.

The chief of the Şanlıurfa Police department, Eyüp Pınarbaşı, speaking during the funeral ceremony, claimed that PKK extensions have infiltrated the police department. Pınarbaş, in a veiled reference to the Gülen Movement, which is accused of infiltrating the government's key bodies in an apparent bid to topple the government, said: "these sections [the Peoples' Democratic Party (HDP)], that use the language of peace and brotherhood have been arm in arm with the organization that infiltrated our stations. That organization [Gülen Movement] tried to weaken the intelligence activities, via the infiltrators."
"Upon the orders they received from their superiors, they shut down our province's plate recognition system just to trigger terrorism," Pınarbaşı further claimed.

Two police officers were found dead in their home in Turkey's southeastern province of Şanlıurfa on Wednesday. The men were sharing a flat in Ceylanpınar, a town on the Syrian border that lies 120 kilometers east of Suruç, where Monday's bomb blast killed at least 32. The People's Defense Forces (HPG), an armed wing of the PKK, released a statement on Wednesday on a PKK-leaning website, saying "the attack was carried out in retaliation for the Suruç suicide attack."

The officers were shot in the head, said Şanlıurfa governor İzettin Küçük. One of the officers was serving in the city's counterterrorism unit, while the other was serving as a riot policeman. The suspects were identified as Feyyaz Yumuşak and Okan Acar.

The killings of the officers occurred two days after a bombing suspected to have been perpetrated by the Islamic State of Iraq and al-Sham (ISIS), and which claimed at least 32 lives and left more than 100 injured in Suruç. Many police forces were on standby due to Monday's suicide bomb attack.

By killing security personnel in Adıyaman on Monday and slaughtering two police officers in their home on Wednesday, the PKK has unilaterally broken the truce that was in effect since March 2013 after its imprisoned leader Abdullah Öcalan made a call for peace as part of the reconciliation process that was launched to end the Kurdish question.
Last Update: Jul 23, 2015 9:16 pm
RELATED TOPICS