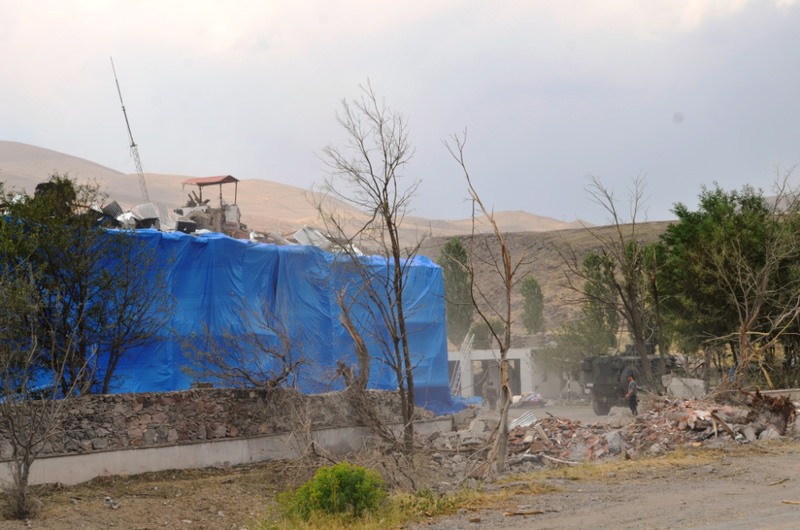 Two soldiers died and 24 others were injured in a suicide attack organized by the terrorist PKK in Turkey's eastern Au011fru0131 province on Sunday.
by Daily Sabah Aug 02, 2015 12:00 am

The PKK on Sunday organized a suicide attack by ramming an explosives-laden agricultural vehicle at a military police station in eastern Turkey on Sunday, killing two soldiers and wounding 24 others, authorities said.

The PKK is increasingly using children as suicide bombers against Turkish security forces, reports indicate, with this latest suicide attack. Two tons of explosives loaded onto a tractor were used in the attack. Another PKK bombing on Sunday, in Mardin, killed one soldier and wounded eight others. Prime Minister Ahmet Davutoğlu said Turkey's firm stance against the terrorist organizations in the region, including the PKK, ISIS and the DHKP-C will continue without respite until all such threats are eliminated.

Two tons of explosives were used in the attack on the station on a highway near the town of Doğubeyazıt in Ağrı province, near the Iranian border, causing extensive damage to the building, the regional governor's office said in a statement. The wounded soldiers were hospitalized but there was no word on their condition. Detailed information on the perpetrators of the Ağrı suicide attack is yet to revealed, but reportedly, the perpetrators of suicide attacks organized by the PKK are mostly teenage members of the terrorist organization, aged between 12 and 16, such as a PKK member who died in a suicide attack on Mount Gabar on July,30, according to a pro-PKK Twitter account.

In the early hours of Sunday, the PKK also organized a mine attack in Midyat in the southeastern Mardin province, killing one soldier and wounding eight others. The PKK attacked an oil pipeline passing through the town of Gelinkaya in Mardin and detonated a mine as security forces arrived to secure the area. One soldier was killed in the explosion and eight more were injured in the following clashes between the militants and security forces. The wounded soldiers are currently being treated at Midyat State Hospital. Operations in the region are continuing, according to authorities.

Addressing nongovernmental organization representatives from eastern and southeastern Turkey in the Ankara's Çankaya Palace, Prime Minister Ahmet Davutoğlu, speaking on the same day as the recent PKK terror incidents, said Turkey's firm stance against the terrorist organizations in the region, including the PKK, the Revolutionary People's Liberation Party-Front (DHKP-C) and the Islamic State of Iraq and al-Sham (ISIS) has prevented the country from being dragged into a more severe wave of violence than that seen in Kobani in Syria.

Accusing the Peoples' Democratic Party (HDP) of playing a double game, the prime minister said: " [HDP say they want to see] democracy in Ankara, [but we see] violence and terror in [eastern provinces such as] Diyarbakır, Batman and Hakkari."

Davutoğlu claimed that if the HDP had not managed to pass the 10 percent national election threshold, it would have perpetrated violence by saying there was injustice, but it passed the threshold and used violence with excessive arrogance as Kurdistan Regional Government (KRG) President Masoud Barzani described.

Davutoğlu said PKK leaders ordered armed attacks on Turkish military forces while he was in a meeting with HDP Co-Chair Selahattin Demirtaş.

"While I was speaking with Demirtaş on July 15, the KCK [Kurdish Communities Union] ordered to start a civil war at the same time," Davutoğlu said.

He said the government is being accused of ending the non-conflict situation, and gave a timeline of escalation triggered by the PKK.

"Three or four days after the June 7 elections, a statement was made: 'We only decide on non-conflict, no one can decide on laying down arms.' On July 9, President [Recep Tayyip] Erdoğan authorized me to form the government; on July 11 the KCK announced that the cease-fire period is over. The Suruç [bombing] had not happened yet; no conditions or expectations were present for an operation. While I was speaking with Demirtaş on July 15, the KCK ordered to start a civil war at the same time. On July 19, one day before the Suruç bombing, [KCK leader] Cemil Bayık said: 'Arm yourselves and be ready for people's war.' Who do you fight against, and with whom? In whose name, which war do you launch? Who gave you the instruction? From where did you receive the instruction to turn Turkey into Syria or Iraq?"

In his remarks in an article for The Washington Post published on Friday, Davutoğlu said Turkey has every right to respond to terrorist attacks.

The prime minister said: "All terrorist organizations that target Turkey must know their acts will not go unpunished and that we will respond to their acts with full resolve."

Davutoğlu's remarks come as Turkish security forces pursue a nationwide counterterrorism operation on groups such as ISIS, the PKK and the DHKP-C, which have seen over 1,300 suspects detained in 39 provinces since July 24 after last week's ISIS suicide bombing in Suruç and the later wave of deadly attacks on security forces by the PKK.