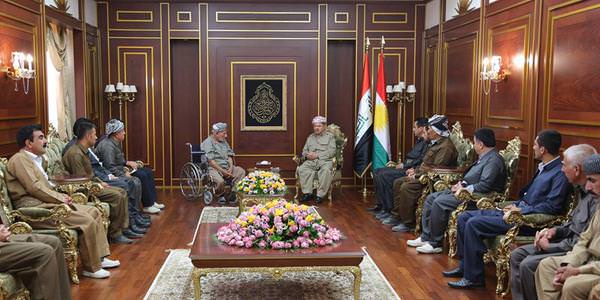 by Daily Sabah Aug 08, 2015 12:00 am
As reports emerged that civilians were hurt in Zargala village during Turkey's air strikes against PKK terror organization's bases in Northern Iraq, civilians from the area visited Kurdistan Regional Government (KRG) leader Massoud Barzani on Saturday and asked PKK to move its bases away from the region.

"They asked PKK to move bases away from their village" Hawrami added.


Pres #Barzani received relatives of martyrs from Zargali village.They asked PKK to move bases away from their village pic.twitter.com/UhF287gsaO


The PKK is being accused of using civilians as human shelters in its camps, while its presence in Northern Iraq, mostly at the expense of civilian population in the area, had long been criticized by the local population and KRG officials.

In August 2, Barzani and KRG officials stated that civilian casualties occurred as a result of airstrikes, emphasizing that this is a result of PKK presence in the area.

Turkish Chief of Staff had previously rejected that civilians were targeted during the operation conducted near Zargala on August 1 and stated that the area was being used by the PKK for sheltering purposes.

Turkey's pro-Kurdish Peoples' Democratic Party (HDP) had later sent a delegation comprised of deputies to the area. Their report claimed that eight civilians were killed in the airstrike.