'Turkey treats the problem of terrorism politically, it is not a question of security,' says senior official 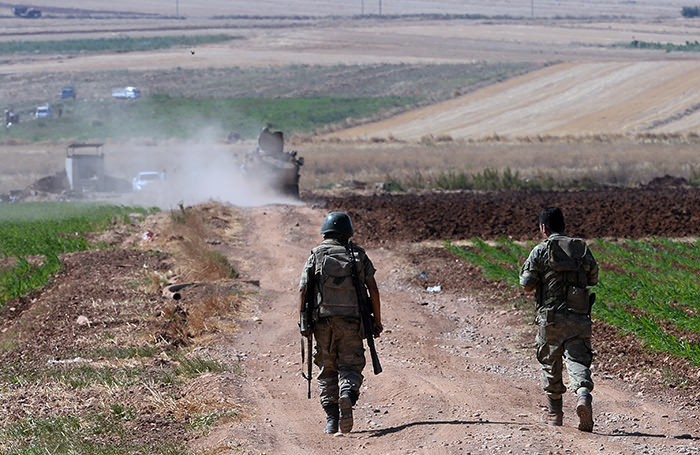 Turkish soldiers patrol near the border with Syria, ouside the village of Elbeyli, east of the town of Kilis, southeastern Turkey, Friday, July 24, 2015. (AP Photo)
by Mehmet Çelik Aug 15, 2015 12:00 am
Turkey has treated the problem of [PKK] terrorism and the 'Kurdish Question' politically, not as a question of security, during the AK Party governments since 2002 according to a senior Turkish government official, who spoke to Daily Sabah on Saturday regarding Turkey's recent war on terrorism during a meeting in Istanbul.

Similar to the approach adopted to deal with PKK terrorism, "Turkey has also treated terrorism in Syria politically, not as a question of security, as we believe that instability in Syria is the root cause of terror in the region. That is why we say the problem of ISIS requires a comprehensive international response, rather than a security-oriented approach" said the official, who preferred to remain anonymous, and added that "this does not mean sometimes we will not need to implement security measures," in terms of the fight against terrorism.

In response to criticism that Turkey has returned to the situation in 1990's, as it has launched operations against the PKK terrorist organization and airstrikes against ISIS since July, it should not be interpreted that Turkey has chosen a security-oriented approach, similar to the pre-2002 security approaches that lacked political solutions, he said.

The official continued by adding that on the contrary, they have been political decisions as a result of "certain actions of the PKK and ISIS" against Turkey and this does not mean that Turkey has refrained from a political approach.

Turkey has conducted three air strikes against ISIS, and more than 400 against PKK terrorist camps in and outside of Turkey and in response to criticism that Turkey has not enhanced its fight against ISIS, the senior official told Daily Sabah that "Turkey is part of an international coalition and will not act unilaterally against ISIS in Syria, as long as there is not a direct threat to our Turkish border."

Turkey continues its fight against the ISIS network in Turkey by launching raids against a large number of alleged members of both Turkish and foreign backgrounds, which have been detained or arrested. The senior official criticized European countries for failing to provide effective assistance until early 2015, saying that the fight against ISIS is a fight against a transnational network of terrorism, rather than a single group within a state.

"Since the sharing of intelligence information has started between Turkey and the European countries, there has been concrete results [against ISIS networks]," he noted.

The senior official also criticized the international community for their failure to act effectively against regional political instability which has caused the rise of terrorism in the region.

"The International community puts their job in solving the Syrian crisis on the shoulder of a non-state actor, the PYD [PKK-affiliated Kurdish Democratic Union Party]," he said.

Meanwhile, the official noted that since the October 6-8 events in Turkey, ThePKK has been exploiting the political situation in Syria, using it as a pretext to create a certain level of legitimacy for its own terrorist activities, in addition to using PYD's relationship with the international community, to damage Turkey's political efforts in reconciliation process, and he added that the PKK and its leadership in Qandil Mountains has also mobilized an 'anti-Erdoğan obsession' to carry out its terrorist attacks while avoiding political efforts to solve the problem.

In its recent terrorist attack, PKK has been using a 'mafiatic' style against the Turkish security officials, as it was seen in the killings of two police officers in their sleep at home on July 22, in Turkey's southeastern Ceylanpınar district.

The official stated that that it is the first country which brought up the rights of the Kurdish people in Syria. Kurdish and Turkish interests do not clash and it is disturbing to say that Turkey is fighting against the Kurds," he said.

He underscored that both ISIS and PKK terrorist organizations are national security issues of Turkey, however their dynamics are not the same and they need to be dealt with differently, he added.

The Turkish government official also added that more than 2,500 people have been detained in recent raids against PKK, ISIS, and DHKP-C members.

During the raids against ISIS members, Turkish police have seized a total of 30 suicide vests in various operations, some of them ready for use, preventing a number of possible attacks, the official said.

In recent PKK attacks which began in July 20, 39 security officials have been killed and 174 have been injured in terrorist attacks, he added.

Forty civilians have also been killed, including the Suruç bombing which killed 34 citizens on July 20, with another 200 injured.

"Turkey has been hit by violence since a suicide bomb attack by a suspected ISIS supporter killed 32 activists in Suruç on July 20.

The Turkish Air Force has been carrying airstrikes against the PKK in northern Iraq and the ISIS militants in northern Syria.
Last Update: Aug 17, 2015 1:23 am
RELATED TOPICS