Ankara: US mediation not needed, PKK must disarm and withdraw 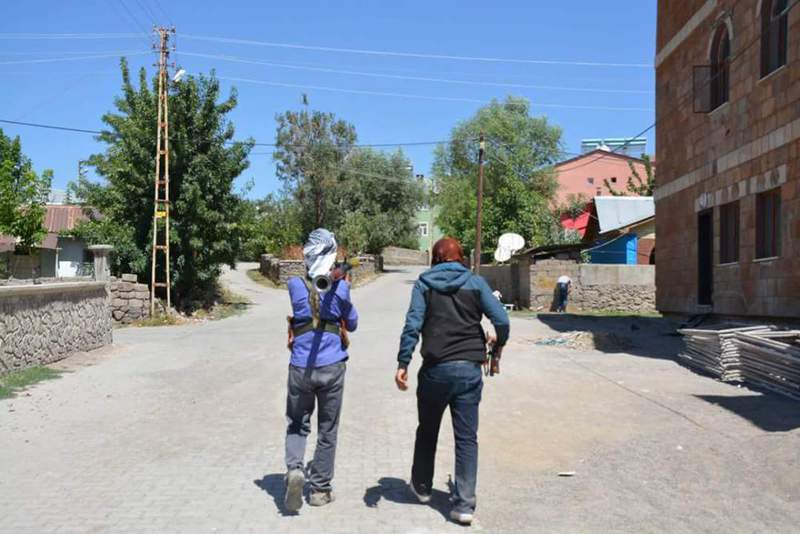 PKK urban branch members carry a rocket launcher and other weapons in the Varto district of Muu015f province on Sunday.
by Ali Ünal Aug 18, 2015 12:00 am

In the wake of senior PKK figure Cemil Bayık's remark that the PKK initiated indirect talks with the U.S., a Prime Ministry official ruled out a possible U.S. mediation, saying the PKK must lay down its arms and leave the country unconditionally

After The Daily Telegraph reported that the PKK started indirect talks with the U.S. and urged Washington to engage in mediation with Ankara, a senior officer from the Prime Ministry told Daily Sabah that they do not need a mediator, emphasizing that the PKK's withdrawal from Turkey and disarmament is the only way to solve the problem. The Daily Telegraph published an interview on Monday with Cemil Bayık who is a senior leader of the Kurdish Communities Union (KCK), an umbrella organization that includes the PKK.

In the interview Bayık claimed that the PKK has started indirect talks with the U.S. "Of course there are messages, there are meetings, letters, and they are likely to develop more," Bayık said regarding their contacts with the U.S. Urging the U.S. to engage in mediation with Turkey, Bayık said the PKK would accept a cease-fire under U.S. guarantees. "I repeat my call that the U.S. mediate in this situation between us and Turkey, and if they give us a guarantee, we would accept that role. Unless there are guarantees, we cannot take unilateral steps," he said.

U.S. State Department Spokesman Kirby said on Monday that the U.S. is not in indirect talks with with PKK. "Absolutely not, this is a foreign terrorist organization" he said, and added that nothing has changed about the United States' position on PKK.

"They need to renounce the violence and resume the peace process and stop attacking Turks inside Turkey" Kirby added.

Commenting on the issue, a senior official from the Prime Ministry said Turkey is not seeking third-party involvement or a mediator for the PKK issue. "What we need is not a mediator but for the PKK to reinstate the cease-fire, withdraw from Turkey and disarm. In recent weeks, the organization has made it clear that they were looking for an excuse to end the two-year cease-fire. They have killed almost a dozen civilians and more than 30 security personnel. The call for a third party to mediate the talks is a cheap ploy intended to distract attention from the fact that the PKK is out for blood, not peace," the senior Turkish official said.

In respect to U.S. involvement in the Kurdish reconciliation process as a third party, Bayık said last November that they would welcome the U.S. as a mediator. Following this, President Recep Tayyip Erdoğan claimed that the involvement of foreign elements in Turkey's domestic problems would yield no beneficial results and only serve to exacerbate and complicate the process of providing solutions to the issues. "We cannot solve this issue with the involvement of the U.S. For years, a Brit acted as mediator with [the PKK leadership in the] Qandil [Mountains]. He was acting as a third party. He brought the process to an impasse instead of advancing it. Similar actors took on a role in Oslo, too. Again, it yielded no result. We have to handle our own affairs now," Erdoğan said.

U.S. President Barrack Obama recently said that Turkey defending itself against the PKK is a legitimate action. "Well, we've discussed with the Turks our strong view that [ISIS] poses the largest threat to the region and we have to stay focused, [and our view is] that to the extent the PKK engages in attacks against Turkish targets, it is legitimate for the Turks to try to defend themselves," Obama said while speaking to a group of 10 reporters at the White House on Aug. 5.

The PKK, which is recognized as a terrorist organization by Turkey, and its allies including the U.S. and the E.U., has killed 41 security officials, while 13 others were killed and 154 were injured in numerous terrorist attacks carried out throughout the country, especially in the Eastern and Southeastern regions.

Targeting the peaceful atmosphere ensured by the reconciliation process in Turkey, between July 7 and August 15, PKK terrorists set a total of 129 vehicles on fire, including trucks and public transportation buses.

In response to the violent terrorist attacks, the Turkish military has carried out air strikes on PKK's hideouts and killed 390 terrorists, while 400 terrorists have reportedly been injured.

According to reports, 896 suspects from PKK and its youth-wing YDG-H, have been detained since July 24 in extensive operations carried out by Turkish police throughout the country.413 of these suspects have reportedly been arrested.

Around 1,700 people have been detained in a wave of counter-terrorism raids against PKK, ISIS and DHKP-C, amid a spike in attacks targeting police and the army after a July 20 deadly suicide bombing in the southeastern Suruç district, which killed 32 civilians.

Formed in 1978, PKK had been fighting the Turkish government for an independent state until the early 2000's. The group then shifted its goal to autonomy in predominately Kurdish inhabited regions of Turkey.

The Turkish Air Force has been carrying airstrikes against the PKK in northern Iraq and the ISIS terrorists in northern Syria.
RELATED TOPICS