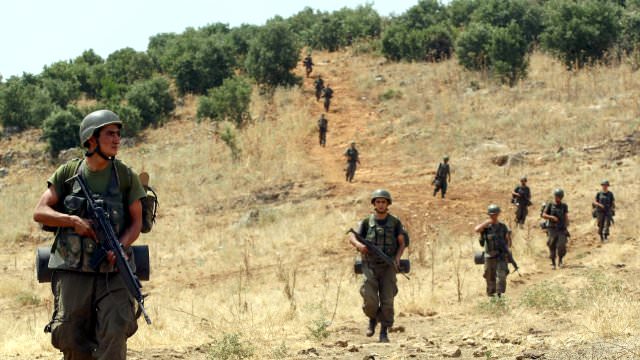 by Daily Sabah with AA Aug 19, 2015 12:00 am
Within the scope of Turkey's counter-terrorism operations, 24 PKK terrorists have been killed in the districts of Lice and Silvan in southeastern Diyarbakır province and the Şemdinli district of Hakkari province, Turkish security forces stated on Wednesday

Most of the deaths centered on Lice, a town around 70 kilometers (45 miles) northwest of Diyarbakir city, where 14 PKK members were killed, according to police and Gendarmerie sources in the province who spoke on condition of anonymity.

The operation began on Monday, when 700 security forces members flooded the area. Fighting was still ongoing on Wednesday night in nearby Fisova, an Anadolu Agency correspondent reported.

In a separate incident, four alleged PKK members were killed in Silvan, around 90 kilometers east of Diyarbakir, on Wednesday, according to the same sources.

Turkish Air Forces also carried out an air operation against the PKK late Wednesday after eight soldiers in Siirt were killed. Turkish jets bombarded PKK camps in the Karaçalı area near the Turkish-Iraqi border for an hour.

Operations against the PKK - considered a terror group by Turkey, the EU and U.S. - came after it renewed attacks on Turkish security forces following the July 20 Suruç bombing. Around 50 police and soldiers have been martyred in attacks attributed to the insurgents while hundreds of alleged PKK members have been killed.