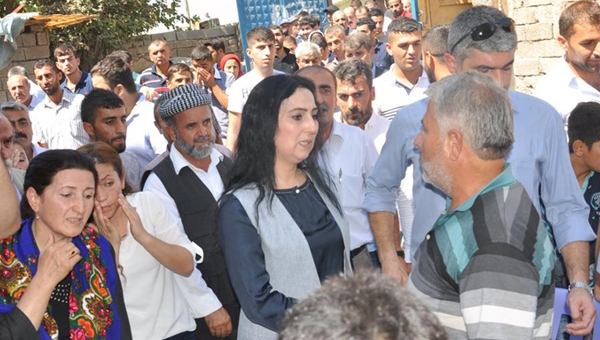 Visiting the district of Varto in Turkey' southeastern Muş province, Yüksekdağ and her group paid a visit to the families of the PKK terrorists killed on August 10, and left their scarves on the place the female terrorist was killed.

In PKK's August 10 attack on Turkish security forces, three soldiers and a police officer had been killed by the terrorists. Also, on August 19 the PKK detonated a remote-controlled bomb while a Turkish military vehicle was passing, killing eight soldiers in the southeastern Siirt province.

There has been a recent surge in violence across Turkey's southeast after the breakdown of a two-year ceasefire with the PKK last month.

Operations against the PKK - considered a terror group by Turkey, the EU and U.S. - came after it renewed attacks on Turkish security forces following the July 20 Suruç bombing.

Around 50 police and soldiers have been slain in PKK attacks while hundreds of PKK members have been killed.
RELATED TOPICS