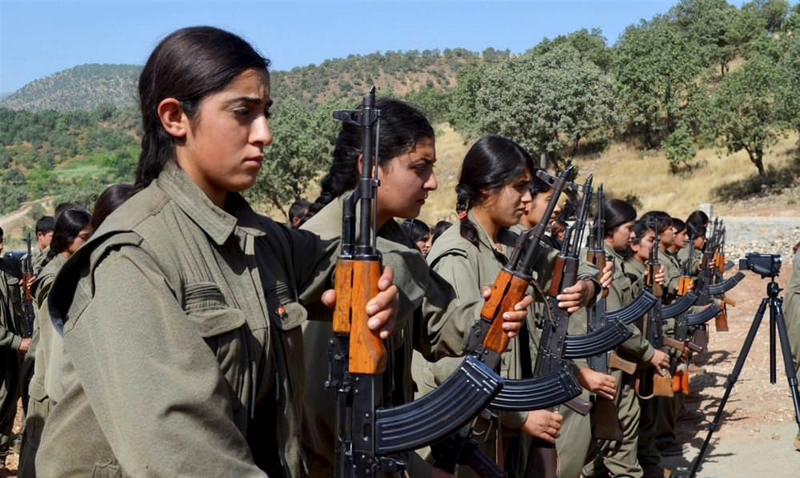 While discussions at Western media reports that praise terrorism or terrorists continues, the European Center for Kurdish Studies, which focuses on human rights violations against Kurds in Syria, has revealed staggering information regarding the Democratic Union Party's (PYD) forcible recruitment and deployment of child soldiers

There has been a wide-ranging distortion in Western media outlets with regards to covering terrorism or the terrorists involved in the chaotic turmoil in the Middle East. However, the discussions reached a peak when BBC reported a story on Thursday that sings praise to the female members of the PKK, which is recognized as a terrorist organization by the U.S., U.N. and EU. The Foreign Ministry condemned the BBC, describing it as a "clear support for terrorism."

As these discussions continue, a report on Syria's PYD published recently by KurdWatch reveals information regarding the PYD's forcible recruitment and deployment of child soldiers. The PYD is known to be an offshoot of the PKK, which is also accused of recruiting children.

The report, named "Forcible recruitment and the deployment of child soldiers by the Democratic Union Party in Syria," states that along with adults who are also forcibly conscripted by the PYD to serve in the People's Protection Units (YPG), there is an increase in the recruitment of children as young as 12 over the past 14 months. Furthermore, it is explained that recruitment is sometimes forced, while sometimes it is voluntary; nevertheless, against the expressed consent of their legal guardians.

The report provides many cases regarding the forced recruitment of children, while stating that many of the children are underage girls. "On May 10, 2014, fighters for the People's Defense Units recruited 12-year-old Fatimah Salim," the report states, while adding a testimony from one of her family members. "The girl simply disappeared. Her parents are PYD supporters. However they weren't asked if they wanted to send the girl to the military," said the family member. In another case, on April 3, 2015, employees of the PYD-affiliated Asayiş, recruited Dilbar Ahmad Hajji, 16, in Kobani. Her father explained the situation to KurdWatch: "When we demanded her return from Asayiş, my wife was beaten, called a dishonorable traitor, and then thrown out."In the report, it is indicated that the recruitment practice of the PYD and its affiliated organizations usually consisted of kidnappings and recruitment without parents' consent.

As a result of these practices, the report states that escape attempts from the military camps the children are taken to are fairly high. While some of the children are successful in their escape attempts and are able to tell the tale of these military camps, it was revealed that failed escape attempts may prove futile. Nurman Ibrahim Khalifah, 13, who was kidnapped by the PYD in late November 2014 and was successful in escaping her captors, told KurdWatch what happened to a girl who failed. "When I came to the mountains, a girl had tried to escape seven times already and the eighth time she was caught again. We were all gathered together. There was a meeting that lasted the whole night. She was put on a stage and they told her that a PKK bullet was too good for her and she was shot and thrown in the river," she said.

The report affirms that these actions of the PYD are an infraction on international laws. Article 38 of the U.N. Convention on the Rights of the Child from Nov. 20, 1989, states that "States Parties shall take all feasible measures to ensure that persons who have not attained the age of 15 years do not take a direct part in hostilities." In accordance with this law, the Rome Statute of the International Criminal Court classifies the "conscription or enlistment of children under the age of 15 years into armed forces or groups or using them to participate actively in hostilities" as war crimes.

The parents of children believed to have been kidnapped by the PKK have been protesting against the organization's offenses for nearly a year, repeating their demand for them to return their children.

In May 2014, two Kurdish mothers began a sit-in in front of the municipal building in downtown Diyarbakır, a predominantly Kurdish city in southeastern Turkey, to protest the PKK for allegedly kidnapping their 15-year-old children. Later on, the protest rapidly evolved into one of the largest challenges to the organization, as this is the first time that Kurdish parents have risen against the PKK and the strategies adopted by terrorists that turn children into fighters.
RELATED TOPICS