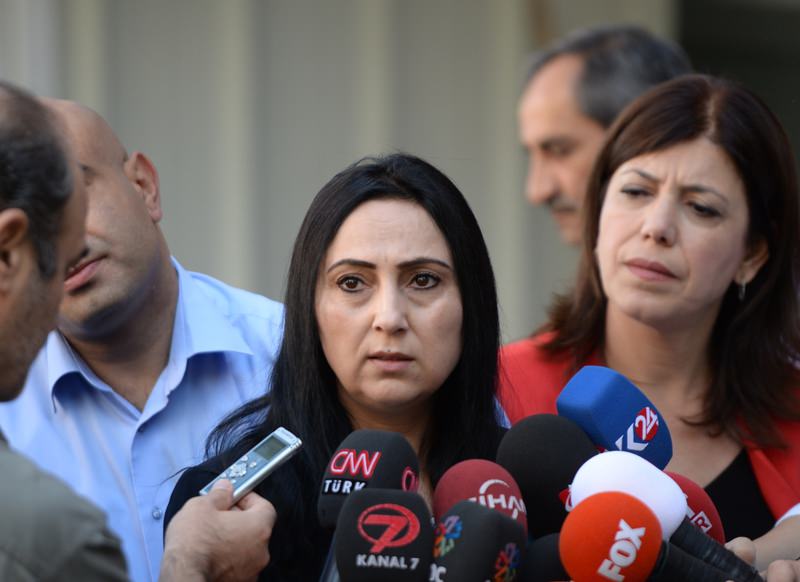 Continuing to legitimize PKK terror and openly support its offshoot PYD in Syria, it has been claimed that HDP Co-Chair Yüksekdağ abetted young people to be suicide bombers in a secret meeting

It was revealed that in a closed-door commemorative meeting of an MLKP-linked suicide bomber, who was killed during an attempt to attack a Justice and Development Party (AK Party) building in Istanbul in 2012, Yüksekdağ said: "We have taken many lives and have lost many lives," in our "revolutionary march in this country." Yüksekdağ's statement was uncovered from a wiretap that was made with a court decision.

Along with her, it was also revealed that 12 other individuals, who are on trial for being members of the MLKP, have talked about suicide bombing activities in the past and encouraged others to be suicide bombers.

The case, in which Yüksekdağ and 12 suspects are on trial charged with forming an armed terrorist group or administering and making propaganda for a terrorist organization, continues in the Adana 10th High Criminal Court.

On July 19, she made remarks in Suruç, the scene of a suicide bombing the following day that killed 32 activists in a suspected Islamic State of Iraq and al-Sham (ISIS) attack, referring to the PYD and its two armed wings. Using a Turkish phrase meaning to rely on the protection of, she said: "We lean our back on the YPJ [Women's Protection Units], YPG and PYD and we do not see any harm in mentioning and defending it," while speaking after a visit to the Syrian town of Kobani, just across the border from Suruç.

Prosecutors in Turkey's southern province of Şanlıurfa on July 31 launched an investigation into Yüksekdağ over her remarks about Kurdish groups fighting ISIS in Syria. If the investigation results in a criminal prosecution, the Şanlıurfa Prosecutor's Office said it would seek to revoke her parliamentary immunity.

Yüksekdağ paid a visit with a group to the district of Varto in the southeastern province of Muş for the families of PKK terrorists killed on Aug. 10, and left their scarves on the place the female terrorist was killed. In the PKK's Aug. 10 attack on Turkish security forces, PKK terrorists killed three soldiers and a police officer.

Prior to that, she also said those who voted for the HDP in the elections, bringing it over the 10 percent election threshold, asked for the liberation of Abdullah Öcalan, the imprisoned leader of the PKK on İmralı Island. "There is also the freedom of Abdullah Öcalan in the future. Unless Öcalan and other prisoners are liberated, it is impossible to talk about political freedom in Turkey," she said, and added: "While millions of people voted for Öcalan's freedom, peace and reconciliation, none of the ruling parties or a coalition government can ignore it."

During a speech in an HDP group meeting in 2014, Yüksekdağ claimed that they are making politics by being dead and said: "In order to make politics and use the realms of freedom, we need to die. We need to die with our women, children and politicians."
RELATED TOPICS