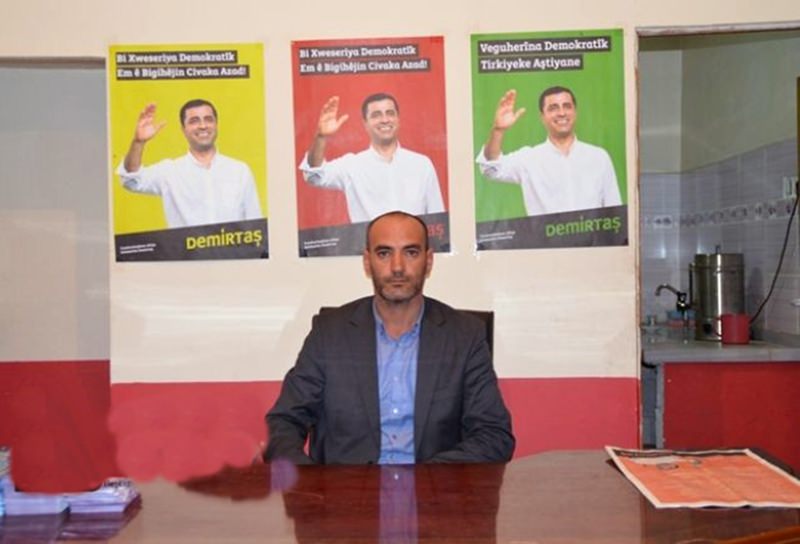 HDP's Eleu015fkirt branch head Engin Dursun poses in front of HDP leader Demirtau015f's posters. He was arrested on charges of aiding and abating a terrorist organization as he attempted to recruit two men for the PKK.
by Daily Sabah Aug 28, 2015 12:00 am

As the pro-Kurdish HDP is at the center of criticism for showing reluctance to distance itself from the PKK and condemn it, a HDP district head was caught by security units while recruiting two men for the PKK

Pro-Kurdish Peoples' Democratic Party's (HDP) head for the Eleşkirt party branch in Ağrı province was reportedly caught by security units while he was taking two people in his vehicle to hand them over to the PKK terrorist organization on Thursday.

According to a report by the state-run Anadolu Agency, HDP Eleşkirt branch head Engin Dursun tried running over the officers when police units were conducting a routine vehicle check in the district that witnessed clashes with the PKK. After ignoring the order to stop his vehicle and allegedly attempting to run over the officers, Dursun was tracked by security units and caught with two others in the village of Molla Süleyman. The two other suspects in the vehicle reportedly said in their interrogation that they were deceived by Dursun and were heading to the PKK's mountain ranks in northern Iraq. Dursun was later arrested by a court for aiding and abating a terrorist organization. The two other suspects were released, pending trial.

The brochures also mention imprisoned PKK leader Abdullah Öcalan, who is currently held in a maximum security prison on İmralı Island in the Marmara Sea. The brochures read: "Join the guerilla forces for the freedom of Apo, [a nickname given to Öcalan]." According to local media outlets and people in the region, the PKK uses young women to hand out the propaganda brochures.

Last year, a group of Kurdish families staged a months-long sit-in in Diyarbakır, a southeastern province with a large Kurdish population and a brief hunger strike to protest the recruitment of their children as young as 15 by the terrorist organization. Turkey was long plagued by the PKK's bloody campaign of terror for Kurdish self-rule in the southeast, which killed tens of thousands over three decades. The government-initiated reconciliation process is seen as a relief from the constant threat from the PKK. The country, however, is still far from resolving the issue, as the PKK avoids giving up its arms and seeks more concessions from Turkey.
RELATED TOPICS