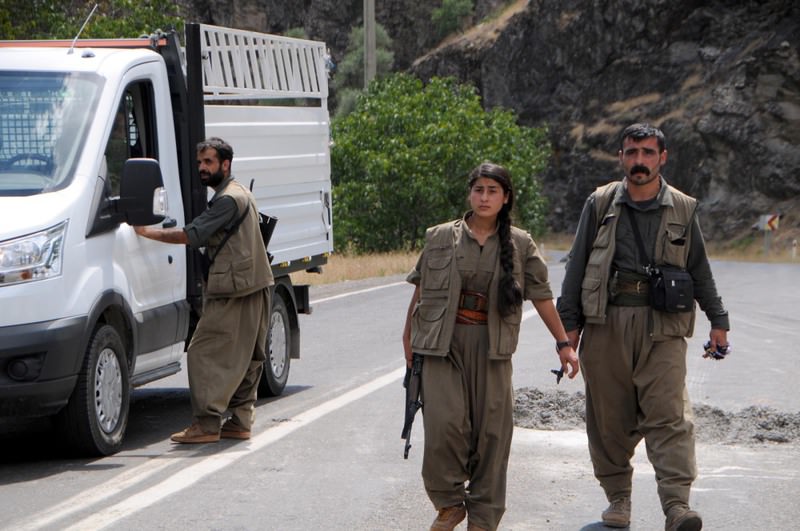 A group of PKK terrorists conduct an ID check in the eastern province of Tunceli in August.
by Anadolu Agency Sep 03, 2015 12:00 am

The European Union has rejected extradition requests for 657 PKK members since 1984. Members of many other terrorist organizations, including the perpetrator of the deadly U.S. Embassy attack in Ankara, are among the fugitives who have not been extradited to Turkey

EU member states have rejected extradition requests for hundreds of suspected PKK members since 1984, according to information provided by a security source to Anadolu Agency (AA) on Tuesday.

The source said Turkey had requested the extradition of 657 PKK activists under Interpol Red Notices, which indicate those individuals are wanted for prosecution or to serve a sentence based on an arrest warrant or court decision.

According to the source, who did not want to be identified, some of these PKK members have met pro-Kurdish Peoples' Democratic Party (HDP) representatives in Europe.

Pointing to HDP Co-Chairman Selahattin Demirtaş's recent tour of European cities, the anonymous source said he met Zübeyir Aydar, a member of the executive council of the Kurdish Communities Union, and Remzi Kartal, co-chairman of the Kurdistan People's Congress in Brussels. Both groups are aligned with the PKK.

Demirtaş later met Swedish Foreign Minister Margot Wallstrom and Austrian President Heinz Fischer. The source alleged that Europe has long protected PKK members and that the group is viewed more favorably in the West due to the opposition of the Democratic Union Party (PYD) – the Syrian wing of the PKK – to the Islamic State of Iraq and al-Sham (ISIS) in Syria.

According to the security source, among those Turkey was seeking to extradite were those wanted for terrorist offenses. The source said 227 were granted refugee statuses, as people feared persecution in their country of origin.

Germany, which initially cited Turkey's use of the death sentence as a reason for rejecting extraditions, has refused to hand over 27 PKK members due to claims they faced "aggravated life imprisonment."

Bülent Orakoğlu, a former police intelligence chief, said the relationship between the PKK and Europe was "very clear," and accused Europe of attempting to fuel tension between ethnic and religious groups in Turkey. "The resolution process has been damaged as a result of Europe's provocations, and conflict has been renewed," Orakoğlu told AA.

Referring to the July 24 airstrikes on ISIS in Syria and the PKK in northern Iraq, he added: "Allies were not informed about the bombardment on ISIS and the PKK. This was one of the clearest signals that the government has been aware that global powers, particularly in the West, have supported terrorist organizations against Turkey. The West, especially Germany, has substantially backed the separatist terror organization. These countries did not hand over many suspects sought in Turkey for terrorist activities."

Orakoğlu then accused foreign nations of wanting to destabilize Turkey through "deep structures." "Demirtaş and [Figen] Yüksekdağ, co-chairs of the HDP that has links with the PKK, visited the U.S. and Europe following military operations against the PKK that heavily damaged the militant group. As a result, interestingly enough, Patriot missile defense systems stationed to target Syria were withdrawn. The U.S. has supported the idea that instead of ISIS, operations have been waged against the PKK."

Mehmet Yeğin, an expert on security and U.S. policy at the International Strategic Research Organization in Ankara, said nations often seek to take advantage of elements within other countries. "The important thing is, what are you doing to prevent [other countries] from utilizing terrorist elements?" he said. "Turkey took steps of this kind in the past, particularly in Europe; there were joint operations between security forces. As a result, European countries were forced to be more sincere and take genuine action against the PKK. In the end, there were operations against the PKK in various European countries."

However, he warned that a reduction in influence in the West would see Turkey's enemies gain in stature. "Now the West sees the [PYD] as struggling against [ISIS]," he said. "The press too propagandizes this substantially. We are not at a point at which you can introduce the [PYD] as a terrorist organization."

Yeğin called on Turkey to utilize all available channels to make its case. "It was a good step for the prime minister [Ahmet Davutoğlu] to tell foreign press agencies that 'Turkey is against all terrorist organizations.' "Strengthening its public diplomacy and e