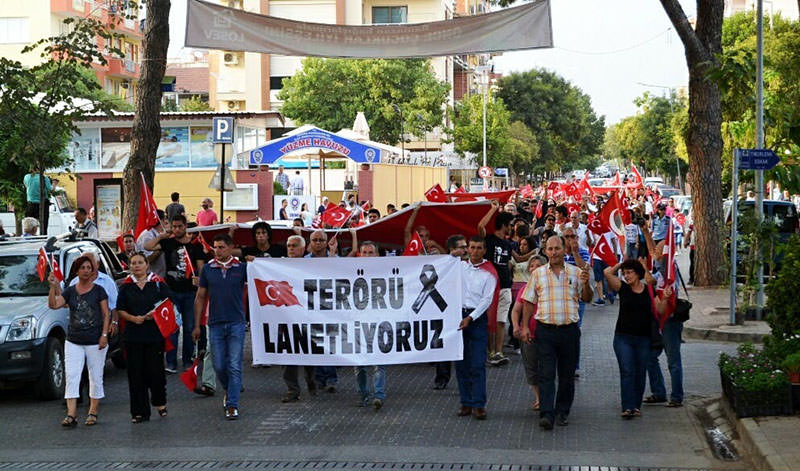 Turkish protesters take part in a rally against the PKK and the killing of Turkish soldiers in u0130zmiru2019s u00d6demiu015f district, Turkey, 07 September 2015 (DHA photo)
by Daily Sabah Sep 08, 2015 12:00 am
After the PKK terrorist organization conducted an attack on a military convoy in Dağlıca in the southeastern province of Hakkari Sunday, people poured on to the streets to protest against the attack and condemn PKK terror, which has been ongoing for the last 30 years. People gathered and marched in the streets of many provinces, including Çorum, Çankırı, Zonguldak, Afyonkarahisar, Mersin, Kırşehir and Manisa. While groups of people condemning PKK terror marched in the streets of Eskişehir province, some citizens also held a sit-in in Bursa province, both in the country's northwest.

Reportedly, explosives planted by PKK terrorists on a road in Hakkari exploded and killed and wounded many soldiers. The incident came after clashes with the PKK started in the place and two armored vehicles were being dispatched to the scene. PKK terrorists detonated the explosives in sequence when the military vehicles passed. The Office of the Chief of Staff announced on Sunday that 16 soldiers were killed and a further 6 were injured in the attack.

The General Staff made a press release on Monday night that said operations against the PKK, which started on July 24, have been intensified and airstrikes have resulted in many PKK casualties. "In the scope of intense airstrikes carried out to the region, two F-16s and two F-4s hit 13 targets belonging to [the PKK]. Despite bad weather conditions, the operations are maintained with determination," the statement said.

Despite national outrage against the PKK, both Republican People's Party (CHP) Chairman Kemal Kılıçdaroğlu and pro-Kurdish Peoples' Democratic Party (HDP) Co-Chair Selahattin Demirtaş opted to not mention the PKK in their statements after the deadly attack. Both leaders, who are accused of collaborating during the June 7 elections to get the HDP into Parliament, received harsh public reaction for not condemning the terrorist organization, but rather criticize state officials.

Demirtaş, whose brother is among PKK ranks, also draws criticism for having direct links to the PKK. After a newspaper published photos of his brother in a PKK camp with other terrorists, Demirtaş said his brother "protects the honor of humanity." The party's deputies not only refuse to condemn terrorist attacks, but also praise them and threaten Turkey. HDP Deputy Abdullah Zeydan threatened Turkey, saying that the PKK has the power to "drown Turkey in its spit" and exterminate Turkey. HDP co-spokesman and İzmir deputy Ertuğrul Kürkçü said in a live broadcast on BBC on Aug. 6 that PKK terror attacks on security forces are not "a matter of condemnation." HDP Co-Chair Figen Yüksekdağ praised the PKK and referred to it as "a national liberation movement and also an organization that stands for democracy and equality." Her remarks came after the PKK commenced suicide bombings and other terrorist activities across the country.
RELATED TOPICS