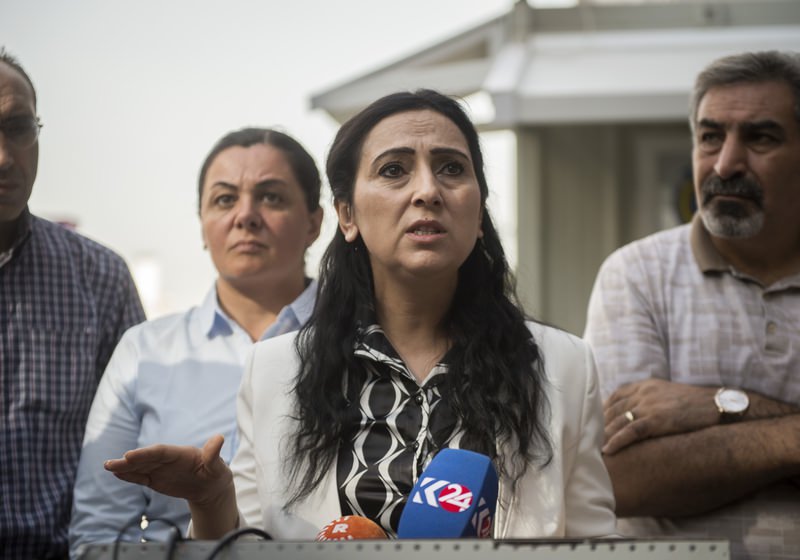 Through a string of aggressive statements, HDP Co-Chair Figen Yüksekdağ is trying to legitimize PKK terrorism while openly advocating violence to reach her aim over the bodies of civilians and soldiers

The rhetoric used by Fiden Yüksekdağ ever since she came to public attention as the Peoples' Democratic Party (HDP) co-chair before the June 7 elections has become more pro-PKK, overtly aggressive and divisive, openly siding with the terrorist group's escalating violence in a bid to weaken the national security and integrity of the country. While she chose to be in the background before the elections, allowing her more media-friendly co-chair, Selahattin Demirtaş, to attract voters in the country's west, soon afterward she pushed herself to the foreground with increasingly aggressive speeches that discounted the reconciliation process and favored outright autonomy or independence in the east and southeast while legitimizing PKK terrorism.

On Sunday, speaking before the HDP's Central Executive Board meeting, she said her party was ready for "resistance or elections," which attracted serious criticism for coming on the day the PKK killed 15 police officers in two separate attacks. She is known to have described the PKK in the past as a "national liberation movement" and saying that the group stood for "democracy and equality."

Burhanettin Duran, the general coordinator of the Foundation for Political, Economic and Social Research (SETA), said the PKK is trying to form cantons in the east and southeast of Turkey just like what the PKK-affiliated Democratic Union Party (PYD) has done in Syria. "Not only Yüksekdağ, but other officials from the HDP are making statements supporting this aim, trying to legitimize PKK terrorism as a political struggle. Namely, a pan-Kurdist political action is tried to be carried out here," he claimed.

On July 19, speaking while visiting Kobani in Syria after the Suruç suicide bombing by the Islamic State of Iraq and al-Sham (ISIS) that killed 34 activists, she said: "We lean our back on the YPJ [Women's Protection Units], YPG [People's Protection Units] and PYD and we do not see any harm in mentioning and defending it."

During a speech in an HDP group meeting in 2014, Yüksekdağ said: "In order to make politics and use the realms of freedom, we need to die. We need to die with our women, children and politicians."

On Aug. 10 Yüksekdağ paid a condolence visit to the families of PKK terrorists killed in Varto, Muş in the southeast, the same day the group killed three soldiers and a police officer.

Nihal Bengisu Karaca, a member of the Wise Men Committee established as part of the reconciliation process and a columnist at Habertürk, said Yüksekdağ's rhetoric was fed by U.S. support for the PYD in Syria, which is believed to seek autonomy or independence in the country's north.

Yüksekdağ, who rose as a socialist activist from among semi-legal socialist movements in the country, co-founding the Socialist Party of the Oppressed (ESP) and then joining an election coalition with the HDP, is known to have made remarks on other political fractions and terrorist organizations.

She purportedly praised the terrorist activities of the outlawed Marxist-Leninist Communist Party (MLKP) and encouraged young people to become suicide bombers in a closed-door commemorative meeting of an MLKP-linked suicide bomber who was killed in an attempt to attack a Justice and Development Party (AK Party) building in Istanbul in 2012. Yüksekdağ said: "We have taken many lives and have lost many lives in our revolutionary march in this country," which was wiretapped by police.
RELATED TOPICS