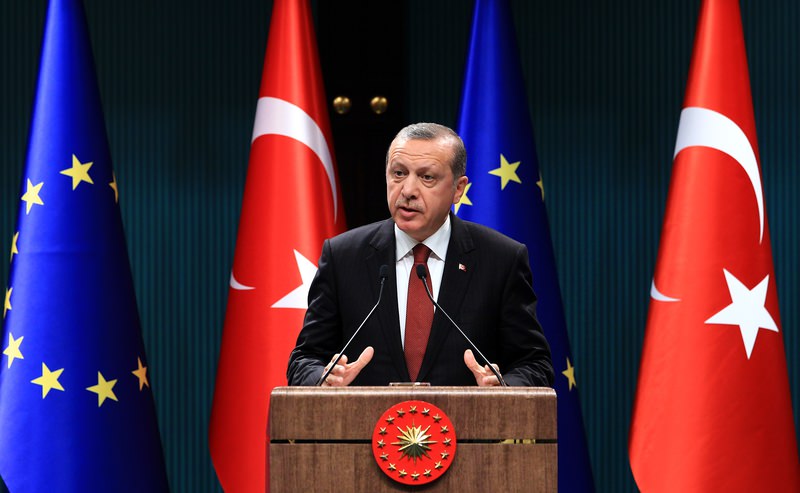 by Daily Sabah Sep 09, 2015 12:00 am
President Recep Tayyip Erdoğan on Wednesday called on the Peoples' Democratic Party (HDP) to stop siding with the terrorist PKK and choose democracy as a path in order to have a role in the Turkish politics.

Speaking after the meeting with European Council President Donald Tusk in Ankara, Erdoğan said that the political figures in Turkey must be aware of their responsibilities to protect the public safety and preserve public order.

Erdoğan said that the HDP has an issue with distancing itself from PKK and said if the party chooses democracy over using arms and violence as a tool to conduct politics, he will respect their democratic rights. "However, if you choose to side with terror, you will have to consider paying a price for it," Erdoğan said.

"The terrorist PKK cannot represent my Kurdish citizens, HDP now depicts an illegal profile because of its support for the PKK. However, they must know that the Turkish government will do what is necessary to preserve the rule of law." he added.

Formed in 1978, the terrorist group was fighting the government for an independent state until the early 2000's. The group then shifted its goal to autonomy in the predominately Kurdish inhabited regions of Turkey.

The PKK announced on July 11 that the cease-fire, which was declared via a message from the PKK's imprisoned leader Abdullah Öcalan in 2013, has ended.