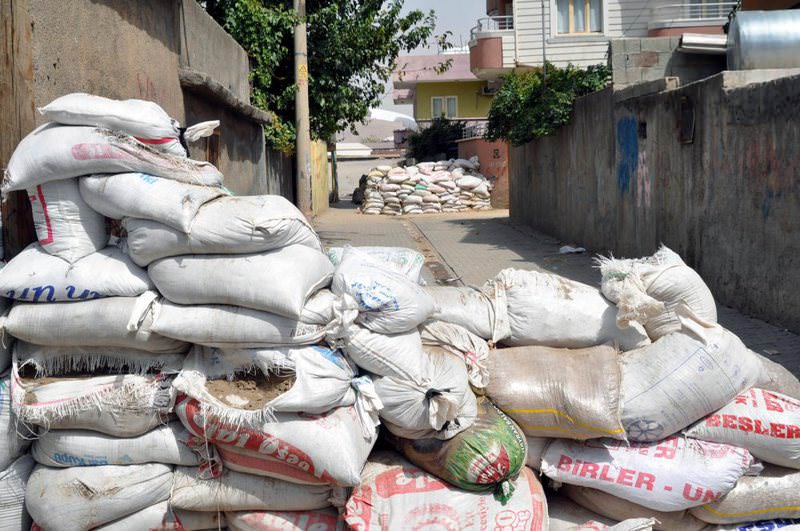 With a curfew in place for more than a week in Cizre, security units are continuing military operations to clear the town of nearly 300 PKK terrorists. Despite mine-filled roads, the government said it is determined to take full control of the town that its home to some 130,000 people

Cizre, a town in the pre-dominantly Kurdish province of Şırnak, had been one of the towns where the PKK has committed its deadliest attacks against security forces and civilians. Taking advantage of the cease-fire from the reconciliation process, which started in 2012, the PKK placed a so-called coordination quarter, its urban branch administration and regional command of its military wing, the People's Defense Forces (HPG), in Cizre. Also, one of the PKK's ammunition stores is in Cizre, where the organization has also dug tunnels from house to house.

The roads into Cizre were either dug up to stop troops getting in or filled with mines. Government officials say they are determined to end the PKK's presence in the town and block the organization from getting ammunition into Turkey from neighboring Iraq for new operations. The PKK, which previously adopted a strategy of fighting in rural regions and mountains, changed its strategy after the June 7 elections and started shifting its militants to cities. The curfew in place in Cizre since Sept. 4 will be lifted at ) a.m. on Saturday, officials announced on Friday.

The aim of this strategy is thought by many as an attempt to make it difficult for the government to keep public order and ensure the safety of civilians. With civilians losses believed to be a result of the terrorist group using them as a shield, the PKK aims to use the killings for its manipulative media campaigns. Furthermore, many images taken from Palestine, Syria or other war-torn countries are being presented as if they were taken in Cizre.

There were certain reports that civilians were struggling to cope with a flour-and-bread crisis. Officials say six articulated trucks were seized by the PKK and three of them were immediately torched. Flour stores were also reportedly seized by the PKK, which only allowed it to be distributed to bakeries close to them. As for the water, electricity and Internet problem in the town, it is reported that 70 percent of the district cannot receive services after the HPG broke off the lines while digging ditches. In response to these matters, government officials argue that providing infrastructure services is the responsibility of Cizre Municipality of the Democratic Regions Party (DBP).

The Interior Ministry has said security units are after 280 PKK terrorists in Cizre, 200 of which are members of its youth wing, the Patriotic Revolutionary Youth Movement (YDG-H). After the PKK unilaterally ended the cease-fire on July 11 and accelerated its deadly attacks, the Turkish Armed Forces (TSK) launched numerous air and ground operations against PKK hideouts and strategic targets, which have killed 1,116 terrorists in the last 65 days.

The PKK's meltdown rose to the surface once again late Tuesday on a Germany-based PKK-affiliated TV channel, MED Nuçe TV. Speaking live on the program, a terrorist named Mehmet Tunç from Cizre addressed the HDP and the PKK's armed wing HPG. Pointing to the fact that the terrorist organization is at the end of the road, Tunç said: "Artillery, mortar bombs and bombs dropped by the TSK tighten the circle." Underscoring that there are only 100 to 200 youth left in the area, Tunç burst into tears, saying: "I would like to address the people: Please save Cizre." The video landed like a bombshell, proving how damaging and efficient operations launched by the TSK have been.
RELATED TOPICS