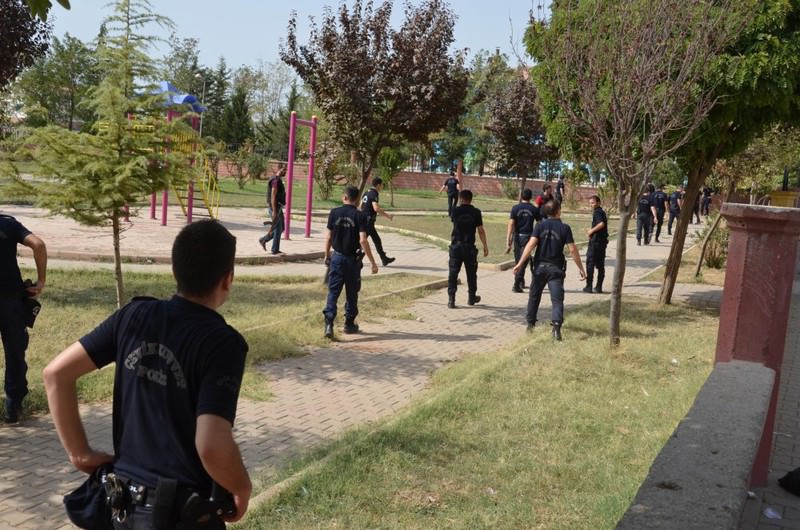 Four suspected PKK terrorists were caught planting a bomb in a park where the HDP was going to hold a rally a day later, which sparked controversy as a similar bomb attack on an HDP rally before the June 7 elections saw HDP votes rising dramatically

Four suspected PKK terrorists were caught on Monday while planting a bomb in a park in the Viranşehir district of Şanlıurfa province where the Peoples' Democratic Party (HDP) was going to hold a public rally the following day. The incident, especially when Turkey is nearing the early elections in a tense environment, bears a resemblance to the attack during HDP's Diyarbakır rally before the June 7 elections, which positively affected the HDP votes.

Police patrolling the area noticed the suspects and quickly reacted. They detained three at the scene and tracked down the other suspect and detained him in his house. In addition, the police suspect that the same suspects had carried out an attack in the district on an armored police vehicle a couple days earlier. Further measures in the area were taken to prevent further attacks.

The failed attempt sparked controversy as the country nears the snap elections on Nov. 1, given that the bomb attack on an HDP rally in Diyarbakır province just two days before the June 7 elections turned out quite well for the party.

Speaking to Daily Sabah about the failed attempt and alleged link between the two incidents, Justice and Development Party (AK Party) Mardin deputy and renowned Kurdish writer, Orhan Miroğlu, said that security forces should watch out for possible attacks to create victimization for the HDP, and added: "We cannot claim that HDP members have a hand in these attacks and attempts, but such incidents create an advantage for the party."

Miroğlu also advised people against provocative attacks that might be carried out and said: "Kurds vote for the HDP as a result of these attacks without questioning who the perpetrators are and what motives they secretly have. I hope this never becomes reality, yet as we approach the snap elections we can see bombs exploding and attacks being planned on Kurdish politicians."

When asked about the main objective behind such attacks, Miroğlu said: "They want to create instability and disorder in the country." He also said that those who want to entangle the country seem to want a strong PKK by making up victimization and strengthening the HDP.

Also speaking to Daily Sabah about the issue, Kurdish intellectual and author Vahdettin İnce questioned to which direction votes shift when such attacks take place, and said: "We can call this failed attempt and the bombing before the June 7 elections a coincidence and not directly blame the HDP for it. However, even though the party itself does not plan it, it definitely serves the HDP."

Claiming that the HDP has lost support over the course of the period since the end of the cease-fire, İnce mused that attacks might take place in order to bolster the image of the party. He also criticized the ongoing public perception management carried out by the PKK and said: "Killing people, whether children or women, is immoral, vicious and not brave. Kurds and Turks do not benefit from it. One who claims to be caring about Kurds would not dare to hurt them."

İnce called on people to realize the truth and said: "The matter is completely different. They want to prevent a new and greater Turkey from realizing its goals. Turkey is enclosed by enemies from all quarters. I call on the people to see the bigger picture."