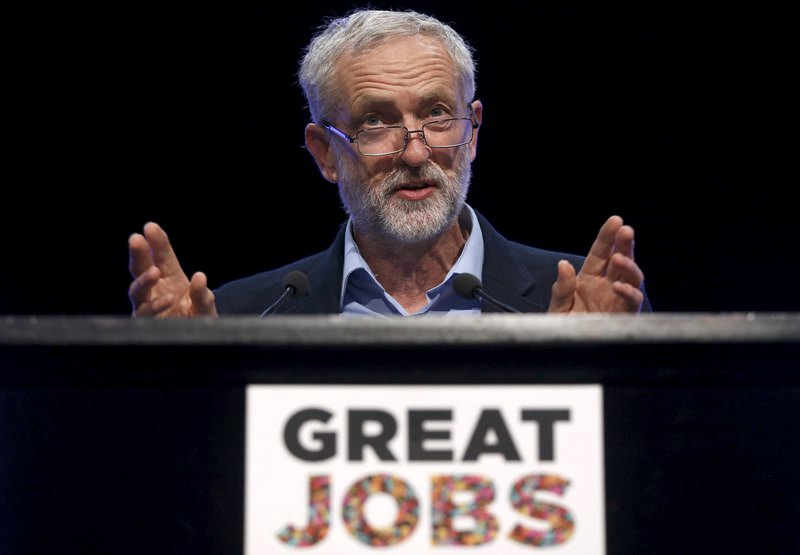 The new leader of UKs opposition Labour Party Jeremy Corbyn addresses the Trade Union Congress (TUC) in Brighton in southern England, September 15, 2015. (REUTERS Photo)
by Ali Ünal
Sep 18, 2015 12:00 am
The newly elected leader of the UK's Labour Party Jeremy Corbyn praised Turkey's reconciliation process that was initiated in 2013 by the Prime Minister of the time, Recep Tayyip Erdoğan, which lasted until July 1, 2015 when the internationally-recognized terrorist organization PKK unilaterally ended the cease-fire.

In his interview to the Middle East Eye (M.E.E.), a UK-based online news portal covering events in Mid-West Asia, Labour leader Corbyn said that ISIS was a part in creations of western interventions in the region. Answering the question of how he would tackle the ISIS problem instead of bombing Corbyn pointed that he would try to isolate ISIS economically. ''ISIS is in part in creation of western interventions in the region. What I would do is try to economically isolate them and also try to unite other groups in the region by supporting autonomy for the Kurdish groups. And recognize the vast amount of arms we have sold to, particularly Saudi Arabia, ended up somewhere and those have been used.'' he said.

Underlining that bombing in Syria would create more problems, he reminded that his stance against military operation in Syria has not changed. ''Bombing by the West in Syria, now would create more mayhem, very unclear who the alliances will be with. I think it would make the situation worse. I oppose the bombing in Syria in 2013 in that historical UK parliament vote and I would continue this stance.'' he added.

Touching upon the increased terror activities of the PKK, Corbyn described the renewal of the ceasefire as first the thing to do. ''It is very bad that the ceasefire has ended and it appears that the Turkish air forces bombing PKK positions possibly in Turkey but also within Syria. First thing that we need to do is to get a renewal of the cease-fire between the Turkish forces and the PKK and serious talks about the recognition of Kurdish rights.''

Acknowledging that the reconciliation process aims to solve the decades-old Kurdish problem with democratic reforms and recognition of Kurdish rights, Labour leader Corbyn said that the then Prime Minister Erdoğan's initiative was the right thing to do. ''It was actually happening until a very short time ago when the Erdoğan government had begun to engage seriously with all of the Kurdish forces, and that's got to be the right way forward.'' he added.

After his election as the new leader of the UK's Labour Party, Jeremy Corbyn became a controversial figure in British politics. He was declared as 'a national threat' by the Prime Minister of the UK, David Cameron, after he refused to sing the national anthem at the Battle of Britain memorial service.