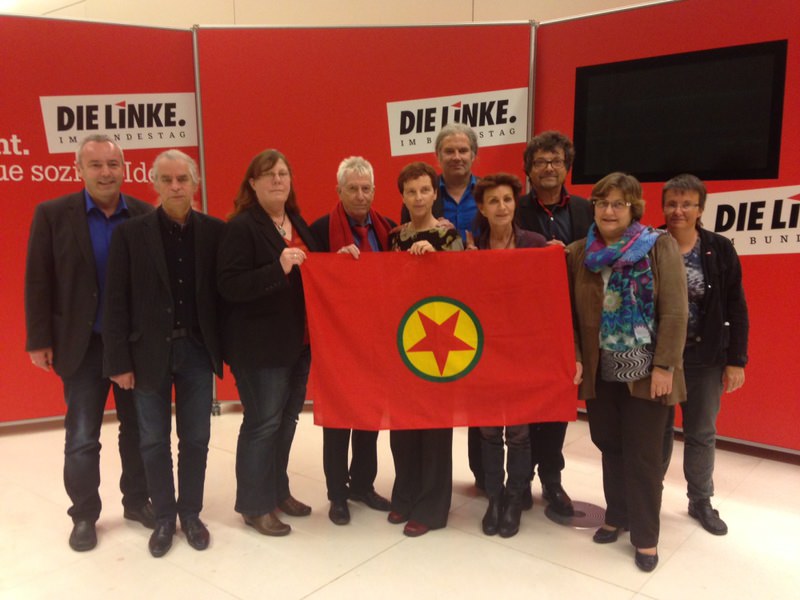 Several German parliamentarians show their support for fellow lawmaker Nicole Gohlke, who was stripped off her immunity after raising a PKK flag at a rally in Munich.
by Yunus Paksoy Sep 30, 2015 12:00 am

Media outlets and politicians in Germany have embarked on a campaign to bolster the image of the HDP ahead of the Nov. 1 elections in Turkey and degrade Ankara's efforts to combat the PKK. While some media labels PKK terrorists rebels or fighters, some politicans have attended PKK rallies and have shown the PKK flag in the Bundestag

As Turkey nears its Nov. 1 snap elections amid its fight with the PKK, some media outlets in Germany have shown support for the Peoples' Democratic Party (HDP) and legitimize the PKK, calling on people to vote for the HDP and portraying Ankara's counterterrorism efforts as waging a war against Kurds. Moreover, some political figures see no harm in attending rallies organized by PKK supporters and presenting the PKK's flag in the Bundestag.

Introducing their motive to vote for the HDP as preventing President Recep Tayyip Erdoğan from realizing his alleged goals of gaining more power for himself, Left Party members Hakan Taş from Berlin and regional Deputy Jan van Aken at an HDP rally on Friday asserted that the HDP should be further strengthened. At the rally HDP Co-Chair Selahattin Demirtaş harshly criticized the Turkish government and Erdoğan, sparking controversy and confusion for some, as German politicians attended the rally and voiced explicit support.

German deputy Nicole Gohlke from the Left Party attended a PKK rally on Oct. 18, 2014 where she gave a speech in front of a banner of imprisoned PKK leader Abdullah Öcalan and raised the PKK flag. Upon the Munich prosecutor launching an investigation, Gohlke's immunity was lifted and she was fined 1,000 euros.

The actions of German politicians regarding explicit support for the PKK, which is recognized as a terrorist organization by the U.S., EU, NATO and many international organizations, are not limited in the aforementioned examples. Van Aken showed the PKK flag during a speech in the Bundestag in March 2015.

Cem Özdemir, a deputy from the Greens, in early September visited Turkey's Cizre province where two separate curfews were imposed to tackle the urban activity and structure of the PKK. Even though Turkish security forces targeted armed PKK members on the streets who ignored curfews, Özdemir spoke the same language as that of PKK-affiliated media outlets, saying the Turkish state is waging a war against Kurdish civilians. He also speculated that Turkey is on the brink of a civil war.

German media outlets have also had a great share in legitimizing the PKK and portraying it as an organization that fights for Kurdish rights. Despite the PKK's status, some German media outlets turn a blind eye when it comes to presenting civilians deaths caused by the terrorist organization and child recruitment that has resulted in the kidnapping of over 2,000 individuals.

Articles published by several German newspapers depict PKK terrorists as "rebels" or "fighters." Escalating tensions, by defining the fight against the PKK as Erdoğan's battle against Kurdish people, some German media outlets have so far taken a biased stance.

Speaking to Daily Sabah about the aforementioned German politicians and media outlets, a former member of European Parliament and Daily Sabah columnist Ozan Ceyhun, said he is familiar with the Left Party backing terrorist organizations for a long time. Ceyhun, however, criticized the Greens party and said: "The Greens party contradicts its own policy of standing against violence and terror by showing support for the HDP and PKK. It's a scandal that the Greens party backs the HDP, which doesn't abstain from siding with a terrorist organization."

Ceyhun went on to show his frustration with Germany's Social Democratic Party (SPD), which he considers to be one of the pillars of German politics, saying: "The SPD has recently started to see the HDP in the same way as the CHP [Republican People's Party]. It's a worrying situation."

Commenting on the role of German media in escalating tensions amid operations against the PKK, Ceyhun said: "German media continuously presents Ankara's war against the PKK as if it was against Kurds. The PKK is portrayed as if it is innocent, which is an effort of perception management."

Also touching on his perceived hatred in the German media for Erdoğan, Ceyhun said: "German society is provoked against Erdoğan. He is depicted as an enemy, a bogeyman and responsible for everything varying from issues with Syria, Iraq and ISIS."

Ceyhun warned German media against such manipulations and said that provoking the German people is likely to hurt bilateral relations dramatically. "Inciting hatred of Turkey and Erdoğan is exactly to the contrary of Germany's interests both politically and commercially," Ceyhun said.
RELATED TOPICS