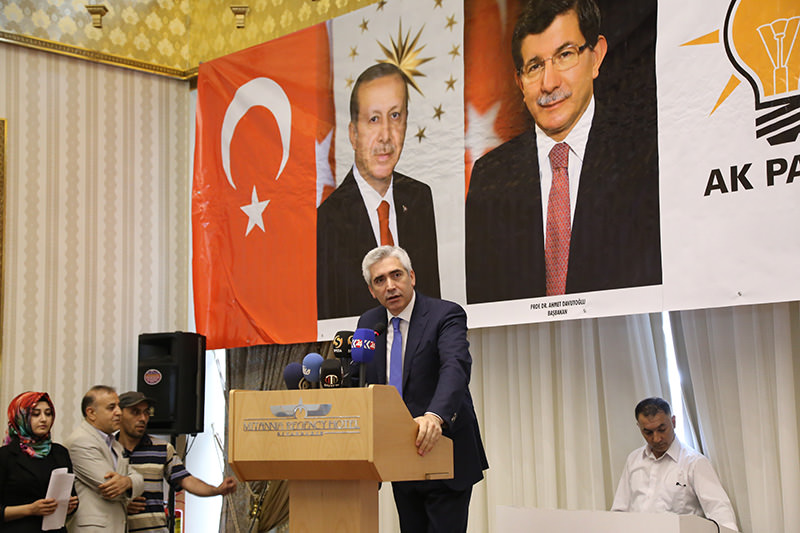 by Daily Sabah Oct 07, 2015 12:00 am
Galip Ensarioğlu, former deputy from Diyarbakır and AK Party front runner from the same province for the November 1 snap elections, claimed Wednesday that the Turkish security officials have footage of PKK terrorists burning the body of a killed police officer but the relevant footage will not be released.

Speaking on the pictures and video footage showing a dead terrorist being dragged by an armored car in southeastern Şırnak province, which sparked public outrage throughout Turkey, Ensarioğlu stated that this action is "unacceptable" and "unforgivable", no matter who the dead person is.

"I watched the footage, it was captured inside the police car and the one who filmed it, released it," Ensarioğlu said, adding that filming and releasing the incident while the body was being dragged against an alleged bomb trap raises questions.

Ensarioğlu, an important figure of Kurdish origin from the region, continued his words by saying that a police officer's dead body was recently burned by the PKK terrorists. "Last week in Silvan (district of southeastern Diyarbakır province), a police officer from Çermik (another district of Diyarbakır) was killed and his body was repeatedly burned with gasoline" he said, adding that the relevant footages showing the incident will not be released to the public.

"Who is in the position to give humanity lessons to another? Both displaying the naked dead body of a terrorist in Varto and dragging his body in Şırnak, none of them are acceptable, investigations are launched for each [incident], we will conduct follow-ups" Ensarioğlu said, underlining that such actions will hurt the governing AK Party the most.

Speaking over President Erdoğan's definition of PYD as a terror organization, Ensarioğlu said: "Turkey has carried out the medical treatment of 1,600 PYD militants fighting against ISIS. 3,200 trucks of food aid were supplied to Rojava (Kurdish inhabited regions of northeastern Syria) as the clashes were ongoing, then the passage of Peshmerga and Free Syrian Army with heavy arms was allowed. Turkey helped Rojava to be liberated, however, the created perception is quite the opposite."
Last Update: Feb 18, 2016 4:07 pm
RELATED TOPICS