My father died because of PKK: son of Ankara bombing victim 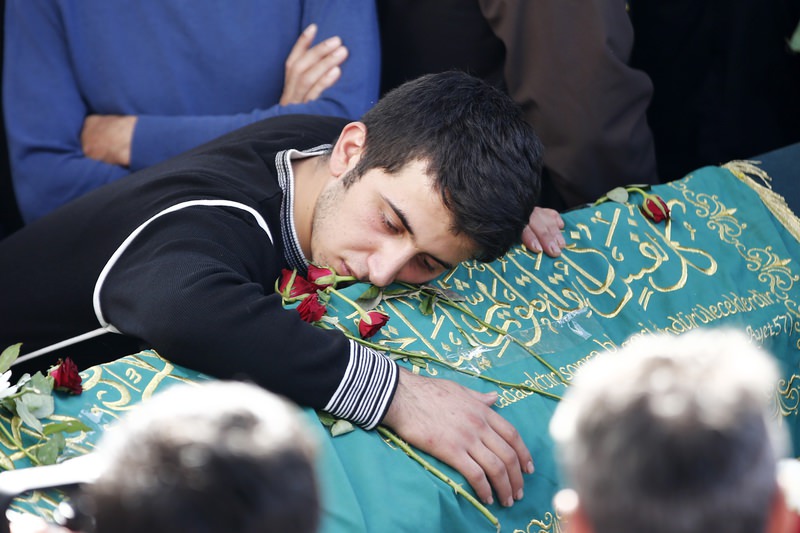 While the supporters of the PKK terrorist organization and pro-PKK politicians try to put the blame of Ankara bombings which claimed the lives of 97 and injured hundreds on the Turkish government, one of the victim's son doesn't seem to agree so

Citizens attending the funeral chanted laments in Turkish and Kurdish for the victims. As the funeral was also attended by PKK supporters, some coffins were covered by the PKK flags.

In the funeral prayer of victim Ahmet Karturlu, 43, PKK supporters wanted to drape the coffin with the flag of the terrorist organization. The son of Karturlu, Harun opposed to the PKK supporters, saying "I don't want a PKK flag on the coffin of my father. My dad died because of them."

Harun Karturlu was also angry at the HDP co-chair Demirtaş. Saying that the PKK is responsible for the mass killing, he didn't want to talk to Demirtaş. The son of the victim was later persuaded into accepting Demirtaş's condolences.

Saturday's blasts have shaken Turkey, as the country faces snap general elections in three weeks, military operations in the southeast and the ongoing civil war on its southern border in Syria. The attack targeted leftwing and pro-Kurdish activists who had gathered for a peace rally.

Since Saturday's disastrous bombing in Ankara, supporters of the terrorist organization, pro-PKK journalists and politicians have been trying to put the blame on the Turkish government. The Turkish state in fact has since sped up investigations and anti-terror operations since the twin suicide bombings, and Prime Minister Ahmet Davutoğlu said on Monday that Ankara is close to identifying the two suicide bombers.

In an interview with private broadcaster NTV, Davutoğlu said, "We are close to a name, which points to an organization," declining to identify the organization suspected of being behind the blasts, while the investigation was ongoing, but said the focus was on ISIS, which is also suspected of being linked to the Suruç suicide bombing in July that killed 33 pro-Kurdish activists.