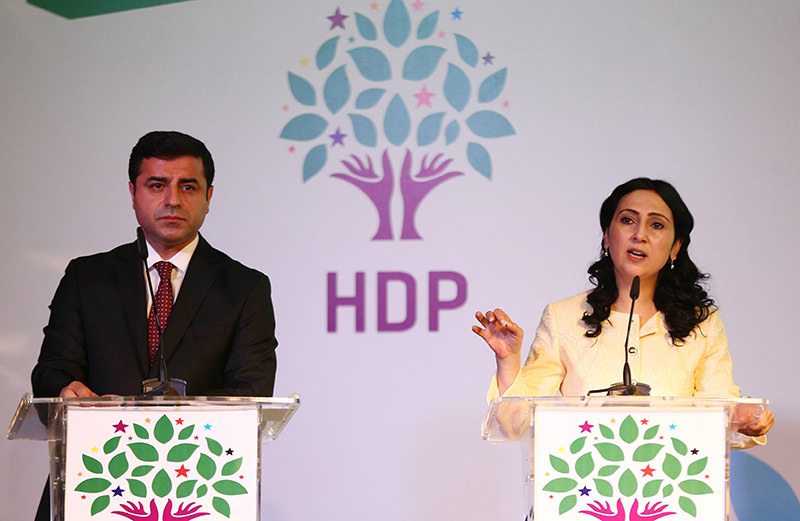 Selahattin Demirtas (Left) and Figen Yu00fcksekdau011f, co-chairs of the pro-Kurdish HDP (AFP Photo)
by Mehmet Çelik Nov 07, 2015 12:00 am
PKK terror organization's imprisoned leader Abdullah Öcalan has blamed pro-Kurdish Peoples' Democratic Party's (HDP) failure in Nov.1 general parliamentary elections on the PKK's decision not to listen to him and deciding to continue the armed conflict, as well as policies developed by the HDP parallel to those of the terrorist organization.

According to a news report published on Turkish daily HaberTürk on Saturday, Öcalan expressed his disappointment about the HDP's Nov. 1 election results and criticized the campaign they followed saying, "I said 'there can be no peace under shadow of guns'. When guns talk, we cannot talk about peace and a solution, I had told them. They did not listen. I was right. It is time for the PKK and HDP to do self-criticism."

"Their politics failed, they became unsuccessful. They took up arms and clashed with the state at the slightest disagreement. The positive outcomes were wasted," he reportedly said.

Öcalan also reportedly highlighted that the revolt call by the PKK was not responded by the public and the group's strategy was not right.

"Kurdish people did not support the organization. They [PKK] were not able to feel the pulse of people's demands and analyze what people wanted," Öcalan reportedly said, adding that PKK could not foresee Turkey's and the region's realities. "Despite the numerous disarmament calls made by the [PKK] leadership, they continued taking up arms," he also said.

PKK's imprisoned leader Abdullah Öcalan called on PKK to hold a congress to lay down arms, in a message read by pro-Kurdish Peoples' Democratic Party (HDP) deputies Pervin Buldan and Sırrı Süreyya Önder in Kurdish and Turkish in late March.

Öcalan's message was read to thousands during for Nevruz celebrations in Turkey's southeastern Diyarbakır province.

In his letter Öcalan said "I think it is necessary and historical for the PKK to end the 40 year-long armed struggle against the Republic of Turkey and hold a congress to conform with the new era's spirit."

In Nov. 1 elections HDP lost nearly 5 percent of votes as the Justice and Development (AK) Party increased its votes by 7 to 10 percent in the eastern and southeastern provinces, which are predominantly Kurdish populated, compared to the June 7 elections.

Renewed violence in Turkey has come in the wake of the July 20 Suruç bombing which was allegedly carried out by ISIS and left dozens of people dead. The subsequent PKK-linked murder of two Turkish police officers at their home sparked a new wave of conflict in the country.

The Turkish government has intensified its counter-terror operations following the recent attacks carried out by the PKK, which is recognized as a terrorist organization by the U.S., the EU and Turkey.

Formed in 1978, the terrorist group has been fighting the Turkish government for an independent state until the early 2000's. The group then shifted its goal to autonomy in predominately Kurdish inhabited regions of Turkey.
Last Update: Nov 07, 2015 2:46 pm
RELATED TOPICS