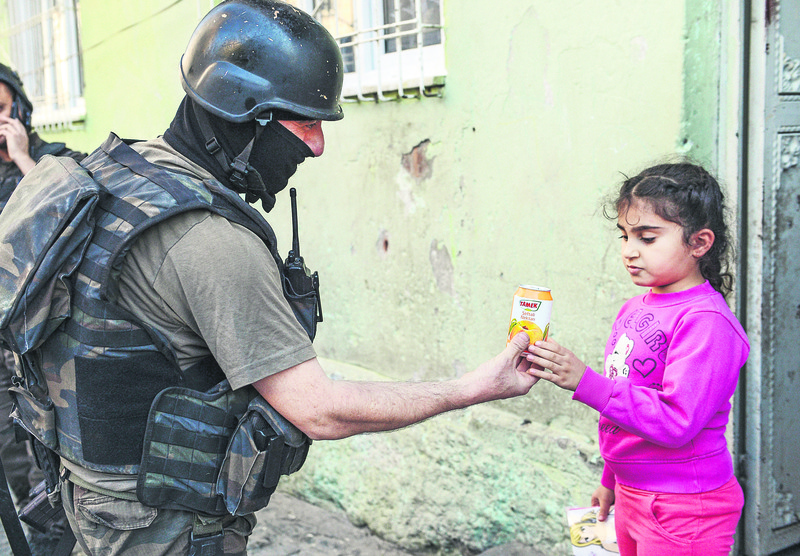 Having cleansed most mountains of terrorists in operations that will continue in the winter at full steam, security forces now set their sights on urban elements of the PKK terrorist organization. Locals in the region also voice their support for the operations and dash the PKK's last hopes

As the Turkish Armed Forces (TSK) continues to conduct effective operations against the PKK and rid the southeast mountains of terrorists, security forces will now reportedly step up efforts in urban areas to crack down on the PKK's urban youth branch, the Patriotic Revolutionist Youth Movement (YDG-H). After operations against PKK hideouts in Northern Iraq weakened the organization and destroyed much of its weaponry, the sole obstacle standing in the TSK's way is the YDG-H that could not quite receive the people's backing.

The TSK has been combating terrorists near the Northern Iraq border since Sept. 27 and cleared the İkiyaka Mountains and Cilo Mountain of PKK forces. The operations have reportedly broken the PKK's back. During the operations security forces seized a large amount of food supplies meant to keep PKK fighters fed for at least six months. With winter approaching, the terrorist organization could find itself in a difficult position. Meanwhile, a statement released following a high-profile security meeting on Wednesday said the counterterror operations against the PKK in Turkey will continue into the winter.

In the meeting held at the prime minister's office, Prime Minister Ahmet Davutoğlu instructed the TSK to continue its operations against the terrorist group during the winter without slowing down.

Overwhelmed by the TSK's relentless counterterrorism campaign, the PKK's urban elements will become the sole target during the winter. While the PKK attempted to incite uprisings in urban areas by mobilizing the YDG-H, people in the region stood by the security forces and repeatedly voiced their support for counterterror operations.

Speaking to Daily Sabah on the issue, Kurdish intellectual and author Vahdettin İnce shared his observations during the Nov. 1 election campaign regarding the backing for counterterrorism operations. "I, personally, observed that the people are very much in favor of operations," İnce said.

Commenting on how people used to be scared in the Turkey of the 1980s and 1990s when they heard words such as operations and security forces, İnce said: "We all know what these words used to evoke in our minds. The PKK abused the reconciliation process after the June 7 elections, which put the people in a tough position. The people are satisfied with the state making a distinction between the PKK and the people." He also added that the new Turkey chooses democracy over violence.

İnce said that the PKK could unravel by itself if the people learn that the Turkish state of the past no longer exists. Labeling operations in urban areas as "quite proper," İnce said: "Civilians are not affected in the operations, and force is used in a legitimate way." He also added that he has received quite positive reactions over the course of the operations.

İlhami Işık, a writer renowned for his views on the Kurdish issue, also spoke to Daily Sabah and said there is some very concrete data answering the question of whether people back the operations against the PKK in urban and rural areas. "The people's point of view regarding the PKK, the HDP [Peoples' Democratic Party] and violence can be better grasped by looking at the outcome of the Nov. 1 elections," Işık said.

Underscoring that this outcome has come as a result of the decisions of millions rather than thousands, Işık said: "Kurdish people said they want peace, not violence. Is there any message clearer and more understandable than this?"

"People said no to blood and tears," he said adding that the government should analyze the Nov. 1 elections and spread its wings even broader.

Emphasizing that it is not possible to physically completely and eradicate the YDG-H, Işık suggested Kurds are not interested in violence and instead seek greater political and civil rights. "As Kurds continue to see that they can seek their rights politically, backing for the operations will further increase and violence will become something to be ashamed of," Işık said.
RELATED TOPICS