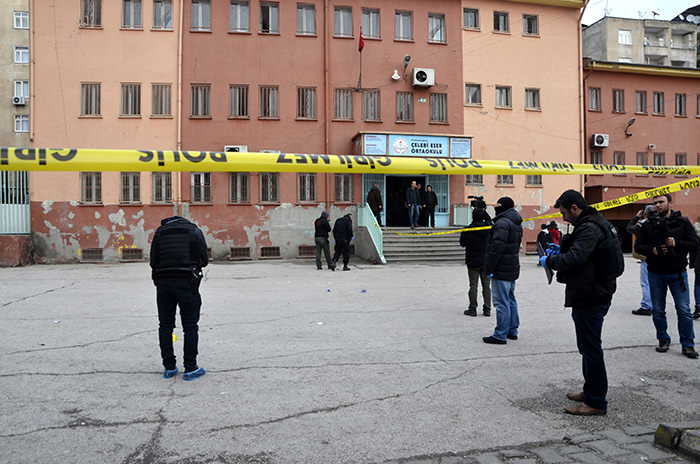 Continuing its bloody attacks against school children, PKK terrorists once again targeted an elementary school in the southeastern province of Diyarbakır and threw a handmade explosive into the school yard, wounding five students

Five children playing in the yard of an elementary school were wounded on Friday during a bomb attack carried out by the PKK in the southeastern province of Diyarbakır. The attack follows a string of bloody attacks by the PKK, targeting civilians in southeastern Turkey.

PKK terrorists threw a handmade explosive into the yard of Nuriye Eser elementary school in the Bağlar district of the province of Diyarbakır. The attack came on the last day of the first term for students. Five students who were at the school to receive their school report card have been the victims of the PKK's bloody attack.

Commenting on the bloody attack after Friday communal prayers, President Recep Tayyip Erdoğan said terror has once again shown its "heinous facade," and described the bombing as an "abject attack." Erdoğan also added that the sole consolation is that there is no "martyred children" among the affected.

The president also affirmed that Kurdish politician Leyla Zana had requested a meeting. "She has had such a request. As a result of the assessment I have had with my friends, my opinion is positive," he added.

The terrorist PKK organization has not abstained from attacking school children since it ended a two-and-a-half year long cease-fire in July 2015. Since then the terrorists have planted bombs inside in school yards and set schools on fire, putting dozens of school children at risk.

A handmade explosive was planted in the yard of a nursery school in the southeastern province of Şırnak in late December 2015. The terrorists reportedly aimed to use children as human shields while attacking security forces who arrived at the scene. A high school was also torched with Molotov cocktails on the same day in the Hakkari province.

The terrorists also set ablaze eight schools and a dormitory on the same day in the İdil district of Şırnak on Jan. 14. Students were present at the schools and the dormitory, and were evacuated without any reported wounded.

A secondary school and a high school were simultaneously set on fire with Molotov cocktails in the southeastern province of Van on Jan. 19. Even though no one was killed or wounded in the attacks, the school buildings were damaged.

In the Yeni Mahalle neighborhood of Şırnak province, terrorists launched an offensive on Dec. 25 against the Şırnak Cultural Center and Public library, while students and personnel were present inside. According to media reports, 17 students were present in the library at the time of the attack. Handmade explosives and Molotov cocktails were thrown into the building. People inside hurriedly left the area and were rushed to the hospital. Four children, who were studying in the library, were wounded due to the fire.

The terrorist organization has also damaged historical sites, including mosques and cultural artifacts. The Fatihpaşa mosque in the city of Diyarbakır was attacked by members of the PKK, which also blocked firefighters' access to the blaze. The fire gutted most parts of the mosque. As flames engulfed the building, police and firefighters rushed to the scene, but terrorists opened fire on the first response crews, stopping them from extinguishing the fire.
Last Update: Jan 23, 2016 1:52 am
RELATED TOPICS