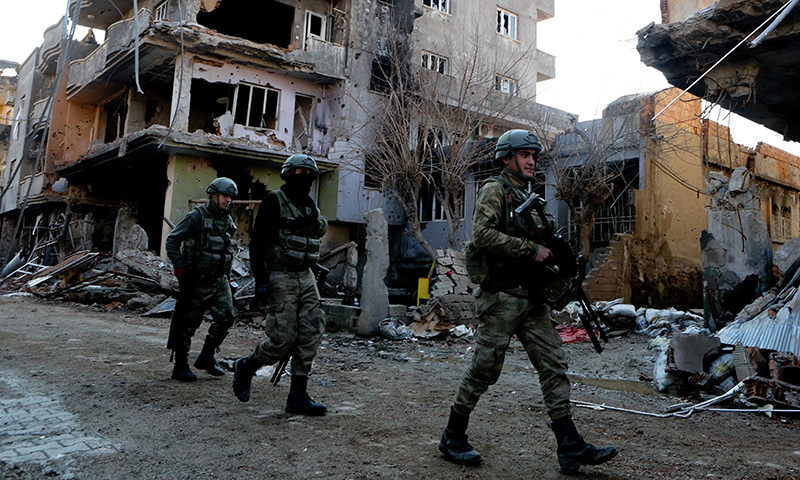 | Sabah Photo
by Daily Sabah Feb 11, 2016 12:00 am
Interior Minister Efkan Ala announced on Thursday that counterterror operations in Şırnak's Cizre district have ended.

Speaking to reporters in Istanbul, Ala said that counterterror operations against the PKK are over in the southeastern district of Şırnak but security forces will continue to monitor some areas for criminal activity. He stressed that there could still be booby traps and landmines in the district but that the state has taken control, successfully completing operations.

Since the imposition of a weeks-long curfew in the district, security forces have cleared the region of PKK tunnels and filled ditches previously dug by the PKK, inflicting heavy losses on the terrorist organization. The majority of casualties suffered by the police and the Turkish military were due to roadside bombs and rockets fired at military vehicles.

Operations in the southeastern districts of Sur, Cizre and Silopi have rid the are of more than 718 terrorists since mid-December, according to official figures.

In part of a new government plan to build 15 police and military posts in the conflict-stricken southeastern districts of Turkey, special operation team members will reportedly patrol Silopi, Cizre and Sur – where the PKK presence poses the biggest threat, making sure that terrorists do not continue digging ditches.

The PKK, which is considered a terrorist organization by Turkey, the U.S. and the EU, resumed its 30-year armed campaign against the Turkish state last July. Since then, more than 240 members of Turkish security forces and thousands of PKK terrorists have been killed in operations in Turkey and Northern Iraq.

The situation in Cizre deteriorated before the PKK renewed its armed insurgency against the state in July 2015. Located on the border with Syria, the town's neighborhoods were divided between pro- and anti-PKK groups, controlled by militants with ties to extremist groups. The region has been terror-ridden since late 2014 when DAESH seized the northern Syrian, Kurdish town of Kobani, increasing tensions.

Since then, security forces have been trying to regain control of neighborhoods barricaded in Cizre amid intense armed clashes. As operations have ceased, reports accusing Turkish forces of extrajudicial killings and blockage of ambulances and firefighters from reaching the injured have emerged; fueled mainly by lawmakers from the pro-Kurdish Peoples' Democratic Party (HDP). Government officials and local authorities have denied these accusations, asserting that PKK terrorists target ambulances enroute to take the wounded to hospitals.
Last Update: Feb 11, 2016 4:09 pm
RELATED TOPICS