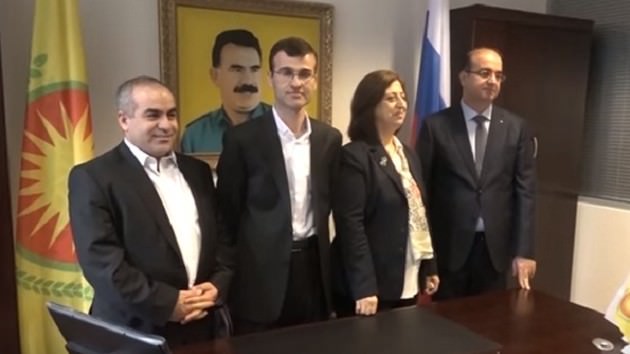 The PKK-affiliated PYD opened a representative office in Moscow last week, with a portrait of imprisoned PKK leader u00d6calan on the wall (right)
by Daily Sabah Feb 13, 2016 12:00 am

As Washington still ignores links between the PKK and PYD, State Department spokesman Toner elided over a question about a portrait of the imprisoned PKK leader Öcalan in the PYD's newly opened office in Moscow

Washington still does not acknowledge any affiliation between the PKK and its Syrian affiliate the Democratic Union Party (PYD), as State Department spokesman Mark Toner left a question about the newly opened PYD office in Moscow unanswered.

Speaking at the State Department's daily briefing on Friday, Toner was asked about a portrait of imprisoned PKK leader Abdullah Öcalan in the Moscow office of the PYD, but gave no clear response.

Indicating that he has "not seen reports" regarding the newly opened representative office, he reiterated that the PKK is a terrorist organization but the U.S. does not feel the same about the PYD and its armed People's Protection Units (YPG) fighting against DAESH in Syria. 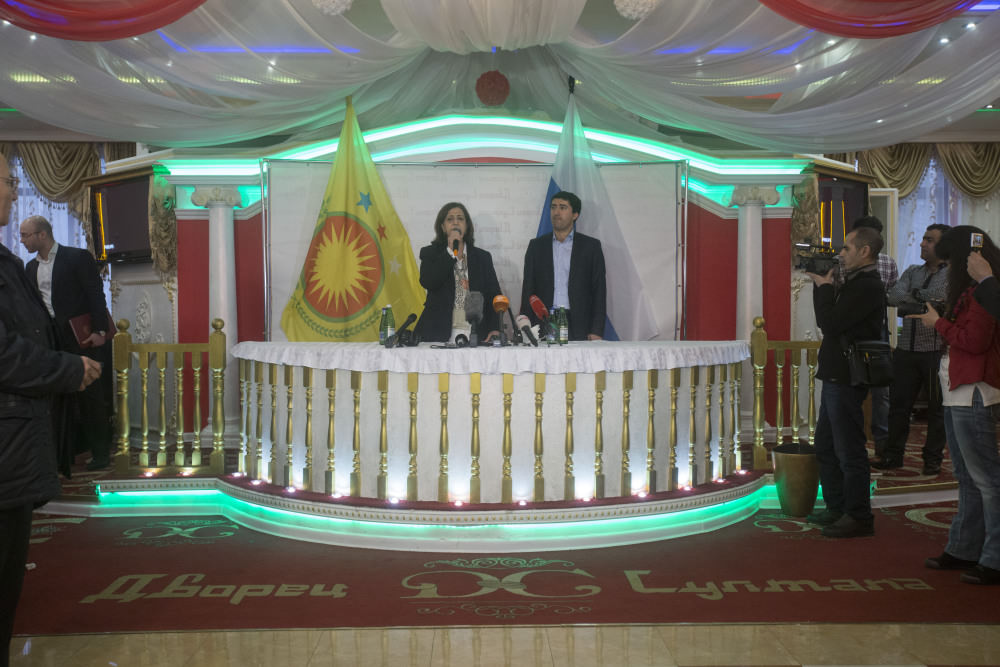 Toner also said that a potential clash between the YPG and U.S.-backed moderate opposition forces is a concern for Washington.

"[W]e've expressed our concerns, frankly, when they come into conflict with opposition forces on the ground," Toner said. "We feel that sets back the overall effort, what we're trying to achieve on the ground."

Toner added that the U.S. continues to urge the YPG to "administer inclusively on territory that they've liberated, protect local populations and property and promote and protect human rights."

Ankara and moderate opposition groups, however, accuse the YPG of cooperating with Syrian President Bashar Assad and continuing offensives against the opposition in Syria's northern Aleppo region.

Several international human rights organizations have prepared reports y, including Amnesty International, indicating that the YPG has committed war crimes and humanitarian offenses in the areas it controls.

The YPG has also recently been supported by Russian air power in its offensives.

Using the fight against DAESH as a pretext for expansion in northern Syria by merging PYD cantons since Assad's lax grip on the region, the PYD opened a representative office in Moscow on Wednesday.

A map on the wall of the office marking a Kurdish area in the region that includes Turkey's eastern and southeastern provinces has caused concern in Ankara. Another map with a Kurdish a region called "Kurdistan Rojava Democratic Autonomous Government" also includes currently opposition-held or DAESH-held areas in northern Syria.

Prime Minister Ahmet Davutoğlu said discriminating between terrorist organizations is as dangerous as terror and that such statements show obliviousness to the reality in the Middle East, adding that Washington clarifying its stance on the PYD is Turkey's right.

On Tuesday, U.S. ambassador to Ankara John Bass was summoned to the Foreign Ministry over U.S. State Department spokesman John Kirby's remarks that the U.S. does "not consider the PYD and the YPG as terrorists." His statement was in response to President Recep Tayyip Erdoğan's ultimatum to Washington to choose either Turkey or the PYD as its ally.

Even though Ankara repeatedly told the U.S. and Europe that there cannot be any good or bad terrorists, pointing to the YPG, the U.S. disregarded Erdoğan's latest call and continues to designate the YPG as its "partner."

"Nothing has changed about our policy on that," Kirby told reporters at a press briefing on Tuesday.
RELATED TOPICS