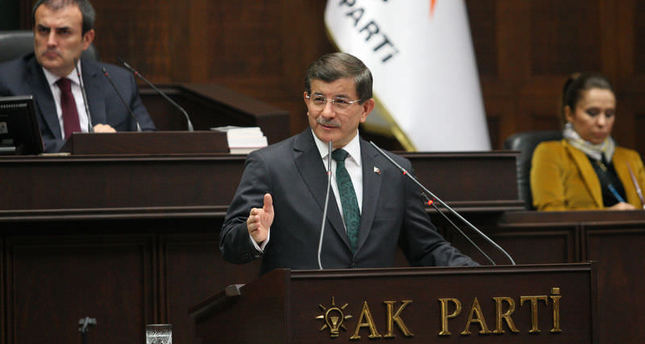 by Daily Sabah with AA Jan 06, 2015 12:00 am
Prime Minister Ahmet Davutoğlu has criticized foreign media outlets for carrying out a defamation campaign against Turkey,claiming Turkey has become authoritarian and stated that the government will not be stopped from proceeding with new initiatives to contribute to Turkish democracy. He made the statements at AK Party's parliamentary group meeting in Ankara on Tuesday.

In his speech, Davutoğlu touched upon a number of issues and criticized foreign media outlets for carrying out a defamation campaign against Turkey. "In the past year, foreign media outlets have consistently claimed that Turkey is moving away from democracy to become authoritarian and that Turkey was allegedly supporting terrorism" said Davutoğlu, who harshly denied the allegations and said that these media outlets intentionally turn a blind eye to the domestic problems of its own countries.

He stated that the smallest incident that happens in Turkey is covered extensively and is exaggerated in efforts to discredit Turkey's success story, which is setting a precedent for and influencing the youth throughout the Middle East.

The Turkish Prime Minister noted that his party had "never been involved by any means" in the Turkish parliamentary commission 's decision not to try four former ministers accused of corruption.

"We respect the objective report of the committee and the final decision of the Grand Assembly," Davutoğlu said.

The Turkish PM stressed that AK Party had never tried to influence committee members to vote against, or in favor, of a trial.

"However, the opposition parties made every day comments reflecting bias," Davutoğlu said.

The Turkish Parliament will give its final decision over the trial of the ministers, Turkish PM reiterated.

After the corruption inquiry committee issues a report of its findings to the parliament by January 9, lawmakers will vote by secret ballot in the general assembly to determine whether the four former ministers will face a trial.

Davutoğlu also panned the Republican People Party (CHP) and the Nationalist Movement Party for cooperating with agents of the Gülen Movement for the sake of bringing down the AK Party government. He noted that the CHP has failed to resolve the crisis in Şişli municipality where former mayor Mustafa Sarıgül's son Emir Sarıgül allegedly attempted to take over his father's seat after he left it to run as mayor of Istanbul in the March 30 local elections.

Davutoğlu also announced that the government will be announcing a reform package each week from now on and will not be discouraged by defamation campaigns, but he did not give details of the packages.