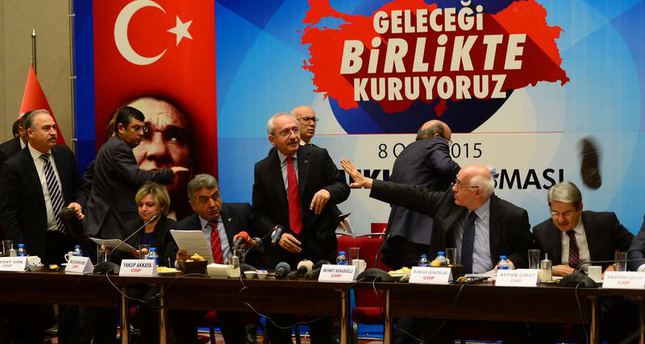 by Daily Sabah Jan 08, 2015 12:00 am
A man threw a shoe at Kemal Kılıçdaroğlu, the leader of Turkey's main opposition Republican People's Party (CHP) during a meeting entitled "Resolving the issues of retired persons" organized in Ankara.

It was reported that the shoe did not hit Kılıçdaroğlu.

The 40 year-old attacker, Yunus Emrah S. shouted "Your policies destroyed my father's life," and he cursed the system as he threw the shoe.

The man was removed from the conference hall when he tried to throw another shoe at the leader. He was detained and taken to a police station for interrogation.

It was reported that the angry protestor arrived at the hotel where the meeting took place and requested to meet CHP's chairman to complain about his father's situation. Allegedly, the man's father worked for a company owned by CHP's deputy chairman, Erdoğan Toprak but did not receive benefits after suffering a . that his father did not receive personal benefits from the chemical company he used to work for after suffering an occupational accident.

Kılıçdaroğlu made a short statement shortly after the meeting and said the attacker allegedly had mental problems.

The opposition leader had previously been attacked at his party's parliamentary group meeting at the Turkish Parliament in Ankara.