PM: Turkey will continue to be a guarantor of Turks and Muslims in Europe 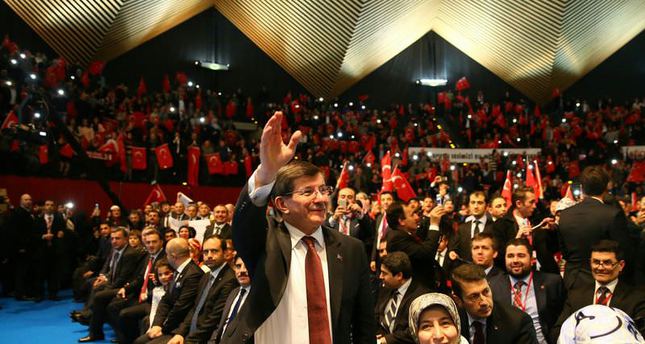 by Nurbanu Kızıl Jan 13, 2015 12:00 am
Prime Minister Ahmet Davutoğlu has underlined Turkey's commitment to serve as a guarantor of the Turkish people living in Europe and Germany while speaking at AK Party's parliamentary group meeting which took place on Tuesday.

He emphasized that Turkish and Muslim people living in Europe should not feel isolated or abandoned as Turkey will continue to protect and support them.

Davutoğlu stated that Turkey's existence in the unity rally - which took place in Paris on Sunday to protest the recent terrorist attacks at Charlie Hebdo magazine and a kosher supermarket, resulting in the killing of 17 people - sent a message to bigots who want to attack or mistreat Turkish people in France for being Muslim.

"You must hold your heads up high, you are not guilty" Davutoğlu said, noting that Turkey will continue to stand against all kinds of terror, barbarism, oppression and extortion.

"The same way, Turkey will continue to raise its voice against people and states which implement oppressive measures against innocent people" he said, noting that Turkey will continue to refer to Syria's and Israel's actions as state terrorism. He also added that peace will be established when all leaders of the world gather in a free Jerusalem which is the capital of the Palestinian state.

"Turkey's message to Europe is clear: we are European and Europe's problems are our problems" Davutoğlu said, adding that Turkey's identity includes Asian, European and Balkan equally. He said that Turkey and Islam are an inseparable part of Europe and have historically contributed to the European civilization in many ways throughout the Andalusian and Ottoman Empires.

The prime minister touched upon the idea that some segments of society in Europe and the world want to collectively blame Muslims and Turks in Europe for the crimes committed by a few. He made reference to Rupert Murdoch's tweets in response to the Paris attack where he claimed all Muslims were responsible for the terrorist attacks until they "recognize and destroy the growing jihadist cancer."

Davutoğlu underlined the danger of attributing crimes to masses and stated that the ideology of "collective crimes" resulted in the birth of the Nazi ideology and mass killings of millions of people in Europe.

Touching upon the fact that Islam is one of the primary elements of Europe, Davutoğlu stated that there are around 45 million people in Europe, including millions of Muslims, and it is unreasonable for Europe to deport Muslims or treat them as if they are temporary immigrants.

In his speech, Davutoğlu also referred to the government's all-encompassing identity and highlighted that the government takes notice of people's contribution to science and academics rather than their outer appearance.

"The value of science and technology has been largely disregarded following the February 28 post-modern coup which took place in 1997" said the prime minister, stating that the government will ensure that everyone regardless of their outer appearance will get the chance to contribute to science and academics, fields where Turkish women with headscarf were strictly prohibited from entering.

Davutoğlu also stated that the government is in favor of a growing population. "We want the population to grow in a dynamic manner" he said, adding that it would result in an increase in the national income.

Referring to the government's efforts to increase the number of Turkey's representative agencies abroad, Davutoğlu noted that the number has increased from 163 in 2002 to 228 in 2015. Furthermore, according to Davutoğlu, Turkey has decided to form a High Strategic Council with Germany and will also be holding a joint cabinet meeting as part of the efforts to strengthen ties with Germany.