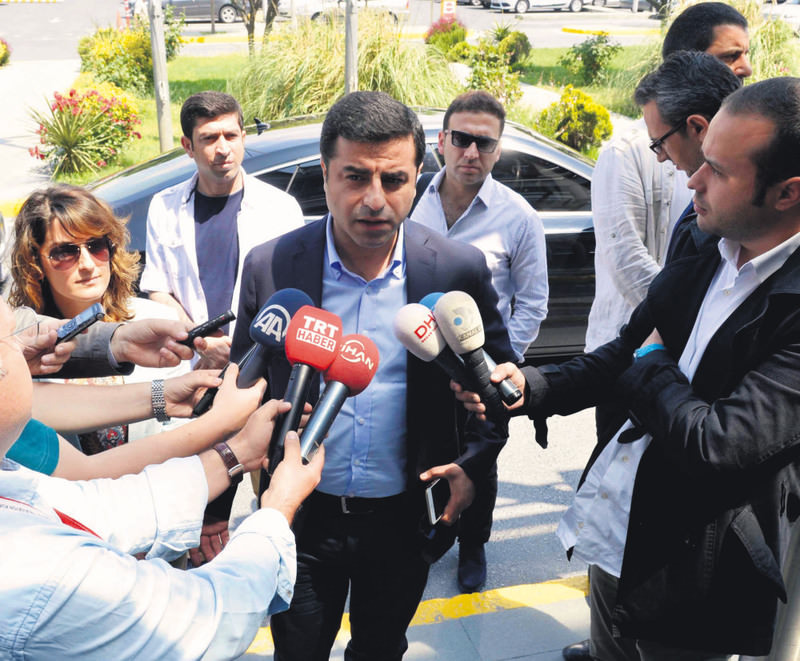 Although ambiguity continues over which parties will come together to form a government after the AK Party lost the chance to do so single-handedly, officials from opposition parties have begun giving hints of possible coalitions

Pessimism lingers over a possible coalition government to be formed by the Justice and Development Party (AK Party), which won the election comfortably for the fourth time in a row, with around 40 percent of the vote, but failed to achieve an absolute majority to form a government single-handedly, throwing the government into an enigma. Concerns are high as stringent differences between the policies of parties will make it hard for negotiations over a coalition, which already has adverse connotations as Turkey saw serious setbacks in both political and economic progress before the AK Party came to power and ended the period of coalition governments.

Although some segments hail the outcome of the elections, which paves the way for a coalition administration, there is also a considerable fear that a crisis might occur if the parties cannot manage to reach a consensus on the issues. Before the AK Party began its tour to negotiate with opposition parties, opposition leaders turned their back on a coalition with the AK Party, but it will soon be clear whether the AK Party can reach a settlement with a partner without making concessions to its priorities. If not, a number of possible scenarios might appear and if they too fail, Turkey might go to early elections.

The Peoples' Democratic Party (HDP), which leapt above the 10 percent election threshold, Nationalist Movement Party (MHP), which also increased its votes by 3 percent compared to the 2011 elections, and the Republican People's Party (CHP), which could only maintain its previous proportion of votes, all ruled out a coalition with the AK Party shortly after the election results became clear. Turkey is yet to see whether the rigid stance of the parties that oppose the idea will alter, but on the second day after the elections, officials from the opposition – except the HDP – struck a milder tone over a possible coalition with the AK Party.

CHP Chairman Kemal Kılıçdaroğlu on Tuesday said the doors of his party are open for Prime Minister Ahmet Davutoğlu, without offering details on whether his party leans toward a coalition with the AK Party. CHP Deputy Chairman Sezgin Tanrıkulu said the party's prior pursuit of forming a coalition would be for one without the AK Party. "We could easily form a government that could usher in a page of restoration with other parties," Tanrıkulu said.

However, his statement was not as sharp as that from HDP Co-Chair Selahattin Demirtaş who on Tuesday reiterated his firm stance on the matter and ruled out a coalition with the AK Party.

Demirtaş said his party is aware of its responsibilities and "would not allow for a chaotic and tense environment in Turkey."

Demirtaş further said: "We are not going to be a part of a HDP-AK Party option. We will discuss other choices."

MHP Chairman Devlet Bahçeli spoke late on Sunday after the election, but there have been no fresh remarks from MHP officials to indicate a change in the party's position toward a coalition with the AK Party.

Bahçeli had said: "The MHP is ready to be a main opposition party to a possible AK Party-CHP-HDP coalition.

"Snap elections will happen whenever they will happen," he added. His party will convene on Wednesday to further discuss the options.

Meanwhile, the AK Party has roughly shaped its road map regarding the outcome of the elections. The party convened under the leadership of Prime Minister Ahmet Davutoğlu on Tuesday, and during the meeting the continuation of stability of the country was stressed. Importance was also placed on the party policy of not evading responsibility in the government to be formed.

Davutoğlu will initially knock on the door of the CHP for a negotiation over a partnership, a visit that is expected to be followed by visits to the MHP and HDP, during which the AK Party will convey its priorities. The priority has been slated as forming a coalition to hamper the idea of a Turkey without a government. If it is given negative responses, the government will put early elections in its agenda. The AK Party has decided to remain as part of the government not to blight the balance of the economy as well as the stability of the country. A coalition, even if formed, is unlikely to last long, according to new comments.

Even in the condition of a green light to the AK Party from the parties for a coalition, agreement on certain issues is deemed highly improbable.

The AK Party, unlikely to shelve its priorities of bringing in a presidential system and new constitution, will likely find all parties against forming a coalition with it. As to the reconciliation process the government has been pursuing to end the Kurdish question, an MHP and AK Party coalition will suffer from two conflicting policies over the matter. An HDP and AK Party coalition may have a common stance on the pursuit, but will dissent on the presidential system issue. The possibility of a tripartite coalition of the CHP, MHP and HDP would also suffer from the conflict of Turkish and Kurdish nationalism. All these possible scenarios are uncertain and could likely lead to early elections.
Last Update: Jun 09, 2015 10:42 pm
RELATED TOPICS