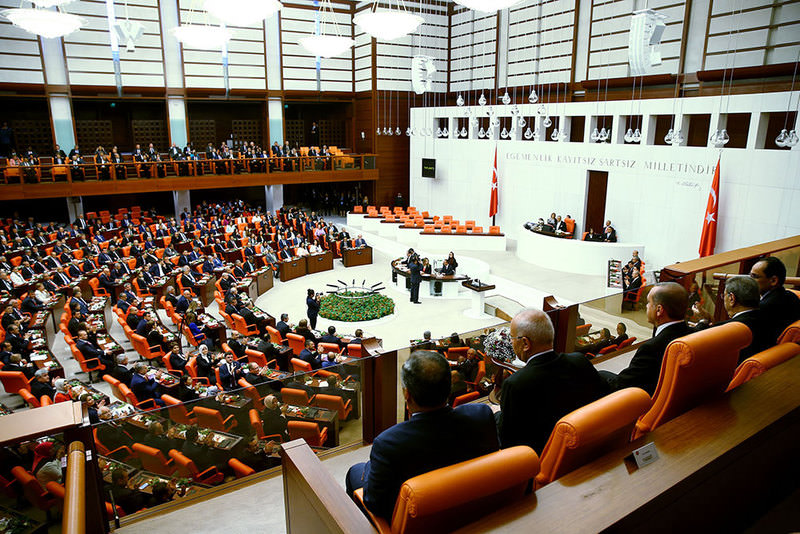 by Daily Sabah Jun 23, 2015 12:00 am
The 25th term of Parliament convened on Tuesday for newly-elected deputies to take their oaths and officially begin their duties, chaired by 77-year-old former Republican People's Party (CHP) Chairman Deniz Baykal, who is the interim speaker of Parliament being the oldest member of the chamber. The plenary session will also commence the process of selecting the speaker of Parliament. The first tour of the election is expected to take place on Sunday after a five-day-long period of determining the candidates.

The first session began at around 3:00 p.m. after a two-month break that included the June 7 general election. It featured an oath-taking ceremony of the newly-elected deputies and was chaired by Baykal, who reportedly will be a candidate to run for the seat of Parliament speaker on behalf of the CHP.
‎
Baykal made the opening speech at the ceremony, after he and the six youngest deputies laid flowers at the foot of a statue of Mustafa Kemal Atatürk, founder of the Turkish Republic. Following his speech, he took his oath and others were called to the stand in alphabetical order of their names and provinces to take their oath.

The bureaucracy of Parliament estimated that the session would last 10 hours, calculating that each deputy spent roughly a minute on the stand. According to the estimate, the ceremony was expected to end around 1 a.m.

The first deputy to take the oath was disabled Bennur Karaburun from the Justice and Development Party (AK Party). A ramp was set to ease Karaburun's way to the stand and was later removed after she finished taking her oath. The other deputies then began to swear in turn.

The official results of Turkey's 25th parliamentary elections were announced on Thursday. According to the official results, the AK Party is the first party with 258 deputies elected to Parliament. The CHP has 132 seats, while the Nationalist Movement Party (MHP) and pro-Kurdish Peoples' Democratic Party (HDP) each have 80.

Candidates for the seat of Parliament speaker will submit their applications after the oath-taking ceremony. The deadline for applications is June 28.

Two-thirds of Parliament has been renewed through the June 7 general elections, which determined the lawmakers for a new term. There are currently 369 new deputies in Parliament, which means the parties decided not to move on with the old staff and instead refreshed its members. The new Parliament is more diverse and colorful compared to the previous one.

The most comprehensive change of staff has taken place in the Republican People's Party (CHP). Sixty-four percent of the party's previous deputies are not returning to Parliament for the new term, followed by the Justice and Development Party (AK Party), which also went through a considerable change in deputies due to the party's three consecutive term limit. Fifty-seven percent of the party's previous deputies are no longer present in Parliament. The Peoples' Democratic Party's (HDP) rate of change is 48 percent.

The National Movement Party (MHP) appears to be the most stable among the parties in Parliament. The rate of newly elected MHP deputies is 38 percent. There are also younger deputies in the new term. The average age of deputies from the HDP is 45, making it the youngest party in Parliament. The CHP comes second with an age average of 49, followed by the AK Party and MHP.

Parliament has its first Armenian origin deputies after 55 years. Four Armenians were elected in the June 7 general elections.
Markar Esayan, an Armenian-Turkish journalist entered Parliament as an AK Party deputy as the 12th candidate from Istanbul's second electoral district.

Selina Doğan from the CHP was elected as the first deputy candidate from the second electoral district of the CHP's Istanbul list. Doğan, who is of Armenian origin, practices law as an attorney.

Two other minority community deputies will also enter Parliament from the HDP ticket, one from Istanbul and the other from the southeastern province of Mardin.

Garo Paylan, who ran for Parliament as the second nominee from the third election district in Istanbul, has Armenian roots and is listed as a trainer on the Supreme Election Board (YSK) candidate list.

Erol Dora, who is a member of Turkey's Syriac community and a lawyer, was the HDP's third deputy candidate from Mardin and an incumbent in the legislature.

In addition to the Armenian and Syriac deputies, two members of Turkey's small Yazidi community were also elected for the HDP – Feleknas Uca from Diyarbakır and Ali Atalan from Batman.

All eyes turn to election of parliament speaker

The candidates for Parliament speaker will be announced in the first five days, which will be followed by the first round of balloting expected to take place on June 28. In the case of the balloting going to the last round, the official result for the announcement of the new Parliament speaker is expected to be on July 2. As Deniz Baykal, temporary speaker is being discussed to be the permanent speaker due to his former position as CHP chairman, whether his stance as the Parliament speaker would be neutral or not is also being discussed. In addition to Baykal, Nationalist Movement Party (MHP) Deputy Ekmeleddin İhsanoğlu, who was the joint presidential candidate of the CHP and MHP in last year's election, is also among the possible candidates. Education Minister Nabi Avcı and Deputy Prime Minister Numan Kurtulmuş from the Justice and Development Party (AK Party) are expected to be announced as candidates as well. Though former speaker of Parliament Ayşenur Bahçekapılı has been discussed as a possible candidate, her stance toward opposition parties during talks regarding the new Domestic Security Reform Package lowers her chances. Additionally to Bahçekapılı, former Interior Minister Meral Akşener and Parliamentary Justice Commission head Ahmet İyimaya are among the possibilities.

The election process for Parliament speaker is viewed as a practice run for a possible coalition government. Four rounds of secret balloting are used for the election of the Parliament speaker. A quorum of two out of three deputies, which is 367, is required for the first two rounds. If the first two rounds do not result in a winner, a third round will be held and a simple majority number of 276 is needed to be elected speaker. The fourth round will be with the two candidates who received the most votes in the earlier round, and a simple majority of votes will be required. The vice speaker positions are divided among the political parties, starting with the party with the highest share of seats provided that two of the positions are designated to the party with an absolute majority.

Once the deputies take their oaths and the Parliament speaker is elected, the official negotiations to form the new government will begin. While Turkey's political history gives little hope for success of the possible coalition government, Prime Minister Ahmet Davutoğlu on Sunday reiterated that the AK Party is open to negotiations to form a coalition government with other political parties. In this regard, the MHP, which narrowed down the options of a government as it did not lean toward either a coalition involving the CHP, the Peoples' Democratic Party (HDP) or external support from the party to form a minority government, is purportedly softening its stance toward the AK Party with MHP Group Deputy Chairman Yusuf Halaçoğlu saying last Thursday: "If the AK Party wants to form a coalition with us, of course we will negotiate with them."

The oath-taking ceremony that took place on Tuesday witnessed a remarkable moment when for the first time in Turkish history, 21 deputies wearing headscarves were sworn in to begin their official duty. The deputies wearing headscarves had already been enjoying the freedom of practicing their faith, as the ban to wear headscarves in public institutions was lifted as part of Ankara's democratic initiatives in 2013, but it is a first that they took an oath wearing the headscarf.

Merve Kavakçı, Turkey's first headscarf-wearing deputy, was forcefully removed from Parliament in 1999 during her oath-taking ceremony, despite being a democratically elected Istanbul deputy. She was removed from Parliament, banned from practicing politics and later stripped of her citizenship. The incident was a huge blow to democracy and was considered by many as a violation of rights. There was another headscarf-wearing deputy in Parliament then, Nesrin Ünal, from the Nationalist Movement Party (MHP), but she took the oath without her headscarf. To invigorate democracy, two years ago, the government introduced an initiative and lifted the ban. Following the new law allowing deputies to wear the headscarf, some deputies adopted the headscarf after their umrah pilgrimage. 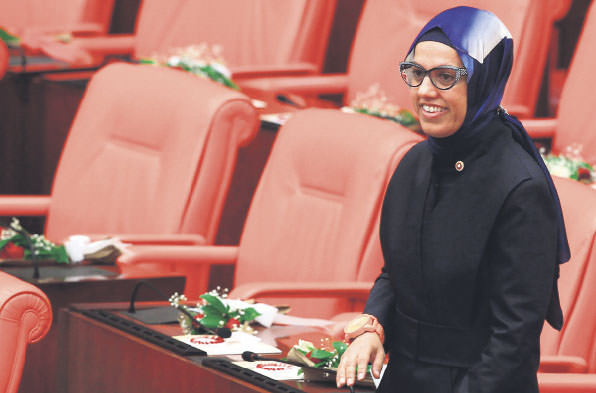 AK Party Istanbul Deputy Ravza Kavakçı, the sister of Merve Kavakçı, who was banned from politics after attending the oath-taking ceremony wearing a headscarf in 1999.

In Parliament, where such instances were staged 16 years ago, there are currently 21 deputies who wear the headscarf, 18 from Justice and Development Party (AK Party) and three from the Peoples' Democratic Party (HDP).

The headscarf has been a matter of heated political debates since the 1920s and stigmatized as backwardness as well as an impediment to secularism and modernity by the founder of the Republic of Turkey, Mustafa Kemal Atatürk, and his supporters. The problem was addressed when the AK Party government, after 12 years in power, abided by its promise to its supporters and passed a law that permitted women who wear the headscarf to work in state institutions as part of efforts by the government to deepen democracy.

Before the law took effect, the ban applied to teachers, lawyers, parliamentarians and those who worked on government premises. It had a tremendous influence on shaping the politics during these times up until the removal of the ban as part of democratization initiatives, and was a matter of controversy between the parties on the right and left. The matter seemed to have been overcome when Turkey witnessed a remarkable moment in its history when four female deputies broke the taboo by walking into Parliament with headscarves and faced no words of protest or anger from opposition parties.
Last Update: Jun 23, 2015 7:26 pm
RELATED TOPICS