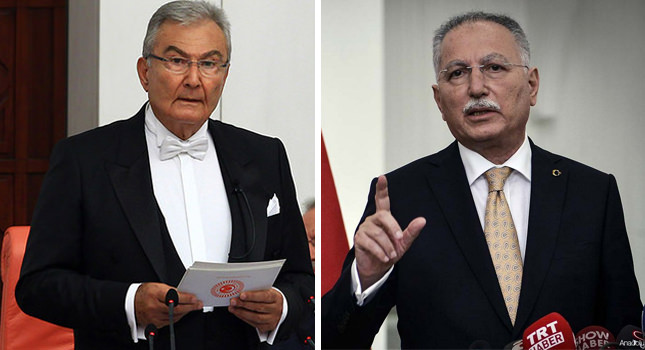 While all three opposition parties have announced their candidates for speaker of Parliament, the AK Party is still to announce its candidate for the election on June 30. In an anticipated move, the CHP announced acting Parliament Speaker Deniz Baykal as its candidate

While all three opposition parties have announced their candidates for speaker of Parliament, the Justice and Development Party (AK Party) is still to announce its candidate for the election on June 30.

The Republican People's Party (CHP) on Wednesday nominated former chairman and Antalya Deputy Deniz Baykal as its candidate, while the Nationalist Movement Party (MHP) nominated Ekmeleddin İhsanoğlu also on Wednesday. The Pro-Kurdish Peoples' Democratic Party (HDP) revealed on Monday that its candidate is Dengir Mir Fırat, who previously served as a deputy for the AK Party.

Baykal is currently acting as speaker as he is the oldest deputy in the chamber. He presided over Parliament on June 23 during the oath-taking ceremony and will stay in the post until the election of a new speaker.
As the most senior deputy at the age of 76, Baykal is the acting parliament speaker until the election of a permanent speaker. Following the announcement of Baykal's candidacy, CHP Chairman Kemal Kılıçdaroğlu said: "We hope that this temporary duty will become permanent."
"I am pleased to receive the offer to make this temporary job a permanent one. I do thank him [Kılıçdaroğlu] and his party," Baykal told the press at Parliament.

İhsanoğlu was the CHP and MHP's joint presidential candidate and formerly served as head of the Organization of Islamic Cooperation (OIC). He ran in the presidential elections and was defeated by President Recep Tayyip Erdoğan. His nomination was criticized by many neo-nationalist CHP supporters as they claimed he was not a suitable candidate due to his conservative ideology.

On Monday, the HDP announced Fırat as its candidate. "We gathered opinions and suggestions from our party members during our party meeting and decided to send Dengir Mir Mehmet Fırat as our candidate for parliamentary speaker," HDP Co-Chair Selahattin Demirtaş told journalists before a meeting of the party's top decision-making body Monday.

A fourth round of balloting takes place between the two candidates who obtained the most votes if an absolute majority cannot be obtained in the third round. The candidate that receives the majority of the votes in the fourth round assumes the post of Parliament speaker. The vice speaker positions are divided among the parties, starting with the party with the highest share of seats, provided that two of the positions are designated to the party with an absolute majority.