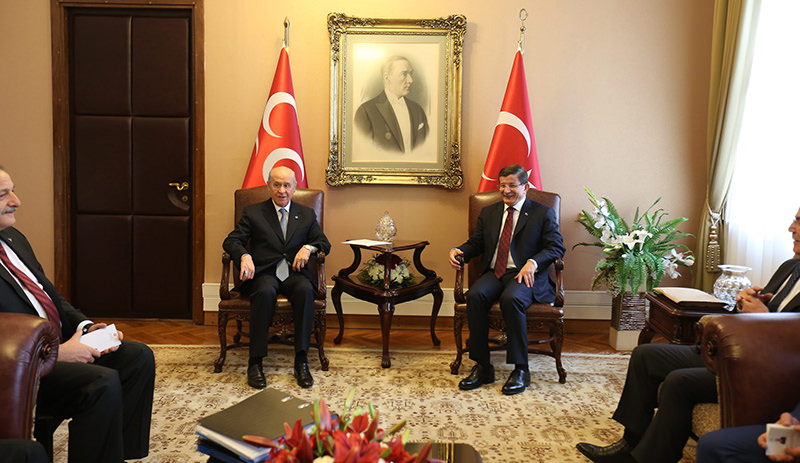 | DHA Photo
by daily sabah Jan 04, 2016 12:00 am
AK Party and the Nationalist Movement Party (MHP) have agreed on the need for a new democratic constitution, following a meeting Monday, held between the two party chairmen at MHP Chairman Devlet Bahçeli's office in Ankara.

Speaking to reporters following the meeting, Nationalist Movement Party (MHP) Vice Chairman Oktay Öztürk said that they are on the same page with the AK Party regarding a new constitution, although he noted that the MHP is strictly against a presidential system. He added that a constitution commission would be established.

"We requested the establishment of a commission, where all parties would be equally represented" Öztürk said.

Öztürk also underscored that the MHP is in favor of strengthening the parliamentary system in Turkey, rather than a presidential system.

"The first four articles of the constitution are MHP's red lines" Öztürk told reporters and added that his party is opposed to discussing these articles.

AK Party spokesman Ömer Çelik spoke to reporters shortly after Öztürk and underscored the importance his party puts on the constitution's democratic principles.

"For our party, rights and freedoms are fundamental values for a new constitution" Çelik said, and added that the AK Party has asked for MHP's support of reform laws.

Çelik also said that PM Davutoğlu informed MHP regarding the ongoing anti-terror operations in southeast, and thanked Devlet Bahçeli for his support against the operations.