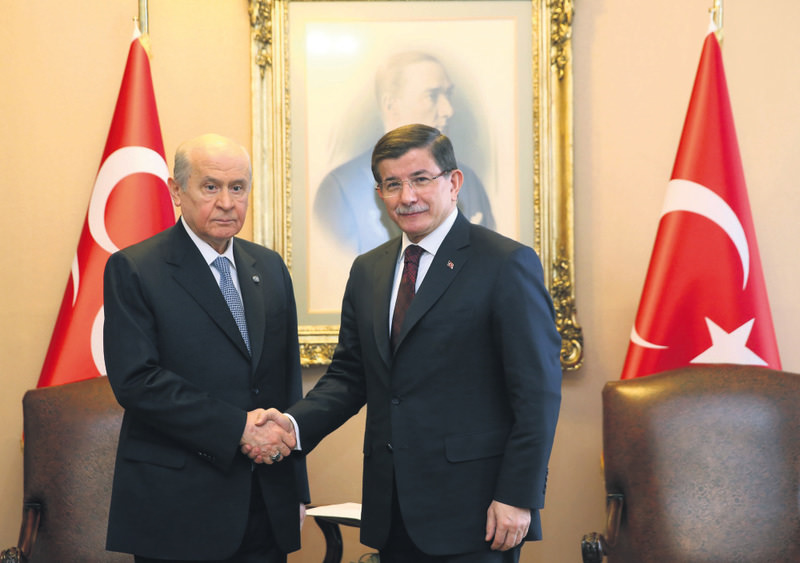 Having met with CHP leader Kılıçdaroğlu on Dec. 30 to seek backing for drafting a new constitution, Prime Minister Davutoğlu Monday held a meeting with MHP Chairman Bahçeli and discussed the issue. Even though the MHP firmly rejected a shift to a presidential system, it expressed support for constitutional changes

In a statement following the meeting AK Party spokesperson Ömer Çelik said that Bahçeli is in favor of the current parliamentary system rather than the presidential regime that the AK Party prefers. "Mr. Bahçeli also stressed that Turkey needs a new constitution and looks positively on the efforts," Çelik said, adding that Bahçeli suggested the Parliament Constitution Conciliation Commission continue its work, as the main opposition Republican People's Party (CHP) had earlier recommended. "Mr. Bahçeli said he is in favor of a strengthened parliamentary system. The prime minister said systems should not be drawn by mechanisms, but morals," he added. He also argued that Turkey is currently not able to say it has an effective parliamentary system, yet affirmed that the AK Party respects Bahçeli's views on the issue.

MHP Vice Chairman Oktay Öztürk also made a statement regarding the meeting in which he stressed that changing the constitution and bylaws was on the agenda. Öztürk said the MHP wants to retain the parliamentary system, but thinks it is necessary to make required changes. "The prime minister did not say no to the parliamentary system, [but] spoke of a presidential system. We said we are not in favor of a presidential system. We stressed that it is a luxury to discuss this issue under these conditions," Öztürk said.

It has been requested that a commission be established and parties in Parliament be represented equally [on it]. We stressed that the duration [of the work] will be determined by this commission," Öztürk said, adding that Davutoğlu saw no problem with the MHP's points of concern.

Prior to the meeting, on Dec. 30 Davutoğlu held a nearly two-and-a-half-hour meeting with Kılıçdaroğlu to discuss the same issues.

Thanking Kılıçdaroğlu and his delegation for demonstrating good will during the meeting, Çelik said: "It was a remarkably important meeting. There is an absolute compromise on the issue of the necessity of changing the current constitution.

"There was a brain storming session, and the main agenda was the new constitution," he said, adding they want to revitalize the Parliament Constitution Conciliation Commission.He also indicated that the two leaders have discussed the presidential system as well as public opinion on the matter. "Turkey does not need federal or autonomic structures. We do not predict a bicameral system."Regarding EU relations, Çelik said Kılıçdaroğlu declared his support for total harmony with the union.The CHP also made a statement following the meeting. CHP spokesman Haluk Koç said the CHP suggested that the Parliament Constitution Conciliation Commission continue with its work.

"Turkey must leave behind the shame of the Constitution of the 1980 coup. Apart from that, we have to get rid of regulations related to the coup. In order to create a first-class democracy, the [current] coup Constitution must be removed. There is an agreement on this issue," Koç said.

Speaking to Daily Sabah, Özcan Yeniçeri, a former MHP Ankara deputy, said that Turkey needs a new and different type of vision for drafting a new constitution. "All parties should be involved in the process," Yeniçeri said, adding that changing to a presidential system is given the utmost importance by the AK Party, which he considers wrong. "The problem is that both the president and the prime minister are elected by the people. It is inevitable that there will be a rift there," he added.

Yeniçeri contended that a presidential system will not solve anything and proposed that the bounds of rights and authorities of the president and prime minister be specifically determined. "I find the MHP's statement following the meeting appropriate," he said.

Markar Esayan, an AK Party Istanbul deputy, also spoke to Daily Sabah and expressed his satisfaction with the opposition parties sitting at the table with the government without acting stubbornly. "The meetings are quite significant in terms of the normalization of politics. It will have positive impacts," Esayan argued.

Underscoring that the public's opinion will also be asked throughout the course of the process about how the system and constitution should be, Esayan asserted that Turkey is on a very healthy path.
RELATED TOPICS