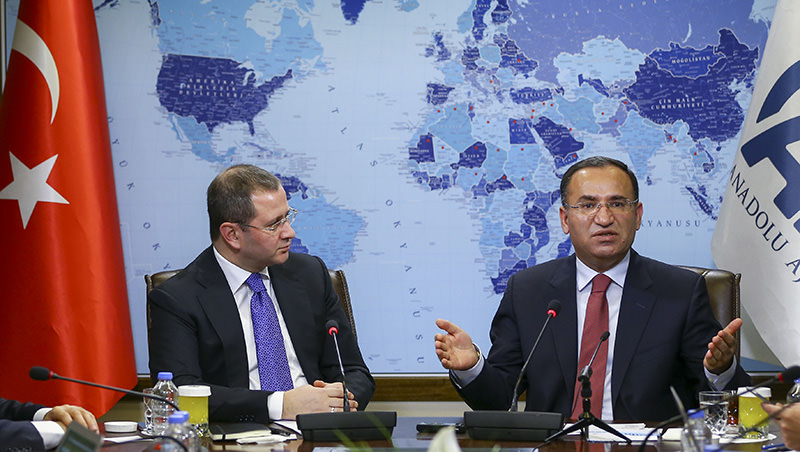 In remarks made to Anadolu Agency's Editors' Desk Wednesday, Bozdağ said that immunity was meant to give deputies freedom to express opinions without any fear of possible prosecution and even if a deputy said something that might be considered as a crime from the assembly chair, there was no danger of a legal investigation.

However, he said that immunity did not mean "freedom to commit crimes."

"That's why deputies are obligated to act according to laws and constitution. It is their first duty to act loyal to the oath they take at the start of their work."

"So, we can never approve of some HDP deputies' acts and statements which are described as crime in the Turkish Penal Code and other special penal codes. It does not suit a deputy. These are not the things that are done by representatives of people," he said.

Prime Minister Ahmet Davutoğlu has floated the idea of lifting immunity of HDP deputies because of its alleged support for terrorism.

The call was made with the backing of another opposition party, Nationalist Movement Party (MHP).

Main opposition Republican People's Party (CHP) has opposed the idea of lifting the immunity of HDP deputies. CHP chairman Kemal Kılıçdaroğlu has suggested that the parliamentary immunity of all deputies be lifted, rather than the HDP alone.

In December last year, HDP co-chairman Selahattin Demirtaş said his party would support calls for the formation of "democratic autonomous regions" in Turkey's southeast as one of 14 items in a final declaration of the Democratic Society Congress held in southeastern Diyarbakır province. HDP deputies have also participated in funerals of PKK terrorists, and have promoted the PKK in various speeches.