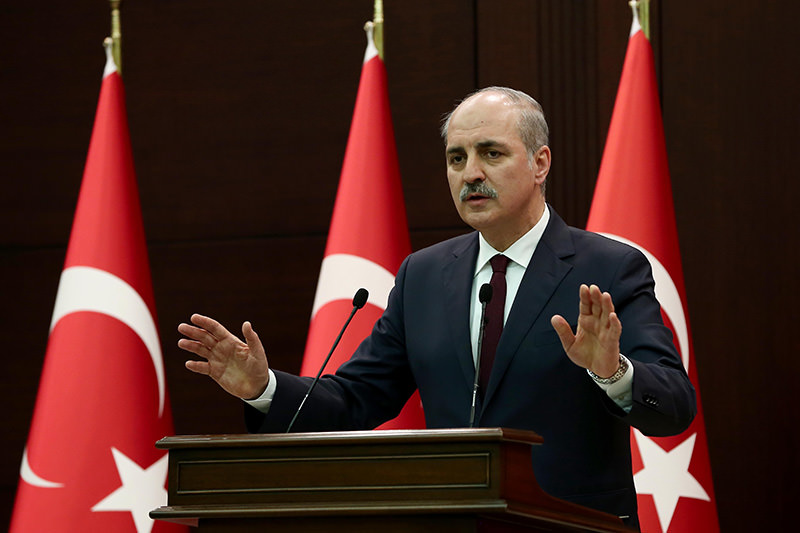 Turkey mulls imposing heavier sentences for human smuggling and classifying it as an act of terror, government spokesman Numan Kurtulmuş announced late Monday as the country struggles to curb the flow of refugees risking death to reach Europe

Speaking at the press conference that followed the regular cabinet meeting, Kurtulmuş said that a draft law on maintaining border security and preventing human trafficking will soon be presented to Parliament. He added that in order to save time until the draft law is passed, a cabinet decree was signed for effective border control and coordination among institutions.

"[The government] decided to categorize smuggling as a terror crime, an organized crime and enact legal amendments to that extent including confiscation of assets used in smuggling," Kurtulmuş said. He also added that smuggling – which has flourished especially in Turkey's coastal cities after the civil war broke out in Syria five years ago — may be defined as "a catalogue crime," which automatically grants arrest and carries hefty sentences.

Human smuggling currently carries a light sentence if it does not involve any additional crime such as extortion, threat or manslaughter of smuggled people sent abroad on boats or in trucks. Under Turkish law, the crime is punishable with prison terms of up to eight years and fines, and if committed under the auspices of a smuggling gang, sentences are subject to an increase.

An action plan to clamp down on smuggling will be disclosed "soon," Kurtulmuş added. The plan is expected to be instrumental to decreasing the flow of tens of thousands of refugees every year. "The plan will define coordination between different authorities such as the police, Coast Guard, gendarmerie command, local governorates etc. We plan to have strict coordination in the field especially in areas where smuggling is prevalent," Kurtulmuş said. He added that other measures were also in the works against smuggling and illegal migration, ranging from capacity building for the Coast Guard – the task force at the forefront of efforts to intercept the migrants — and the establishment of a police department specialized in human smuggling.

Kurtulmuş underlined that efforts against illegal migration also include preventing foreign fighters from crossing the border into Turkey from Syria and Iraq, a duty which he described as "very dangerous."

Millions have been displaced in recent years since the beginning of the war in Syria and the Coast Guard has increased patrols particularly in the Aegean Sea, where small Greek islands near the Turkish coast are located. Yet the country's vast stretch of coast spans more than 2,800 kilometers, between Çanakkale in the northwest to Muğla in the southwest, and complicates Coast Guard operations. Figures supplied by Coast Guard command shows that the number of smugglers captured in 2014 was 106 and this number increased to 190 in 2015. Last month, 14 smugglers were detained.

Smugglers exploit migrants' dreams of taking shelter in Europe and especially in Germany, where generous social benefits attract asylum seekers fleeing persecution and poverty at home. Syrians and Afghans make up the majority of migrants taking the short route to Europe via the Aegean Sea instead of the land route, which is more strictly guarded and patrolled. They pay at least $1,000 or more to smugglers per each person according to accounts given by the smugglers' victims. Usually, they are forced to board overcrowded boats and if they refuse, they are threatened by armed smugglers.

"We face a big case of illegal immigration. Some 91,000 people were rescued from the sea (last year)," Numan Kurtulmuş says, pointing out Turkey's increasing efforts to stem the flow worsened in parallel with the conflict in Syria. Indeed, despite winter conditions, migrants still take the risk of being swallowed into the depths of the Aegean they traverse, often in dinghies. "This is a matter for humanity. Turkey has been raising its voice for years saying that this is a problem not confined to our region. The international community should act together to resolve it. They should contribute to relieving the economic burden (on Turkey)," he said.

It remains to be seen whether Turkey's crackdown on smuggling will succeed as smuggling is already a thriving industry in western Turkey. In seaside towns populated by would-be illegal immigrants into Europe, lifejackets and rubber boats are sold even in grocery stores amid a growing demand for maritime crossings. Experts say most smuggling networks are operated by Syrian gangs, though Turkish citizens play a major role in guiding the migrants to areas "safe" to cross and providing logistics and transportation for migrants.

Responding to recent claims in German media that Turkey asked for five billion euros from the European Union during Prime Minister Ahmet Davutoğlu's recent visit to Germany instead of three billion euros agreed earlier for humanitarian efforts in the country, Kurtulmuş said that Turkey did not follow an open door policy by calculations on possible aid to be received.

"Turkey has not opened its doors to the Syrian refugees who were fleeing the savagery in Syria … in calculation of any aid from anyone," Kurtulmuş said.

He reiterated that Turkey had spent more than $8 billion on caring for Syrian refugees.

"We would never bargain over refugees with the EU or anybody else," Kurtulmuş said.

It is not the issue of three million refugees in Turkey, Kurtulmuş said, but rather efforts against a massive influx of refugees in which thousands are being collected from seas or the country's borders.

German reports on the weekend said Turkey was asking for 5 billion euros to cope with Syrian refugees instead of the 3 billion euros agreed to earlier with the EU.

Deutsche Welle, Germany's state-run broadcaster, cited newspaper Die Welt as quoting a high-ranking EU diplomat as saying: "Ankara now wants 5 billion euros but we are prepared only to give the promised 3 billion euros."

The financial package to support Ankara's efforts to maintain the 2.5 million refugees Syrian refugees in Turkey and to stem the flow of migrants to the EU was agreed to in November but has been blocked by Italy. Germany strongly supports the deal.

Answering to a question whether Saudi Arabia stepped in to improve relations between Turkey and Egypt, Kurtulmuş stated that the people of Turkey perceives the people of Egypt as a friend and ally, however, he stressed changing the anti-democratic practices since the coup in 2013 and return to democracy as key features for the normalization of relations.
Last Update: Feb 02, 2016 4:04 pm
RELATED TOPICS