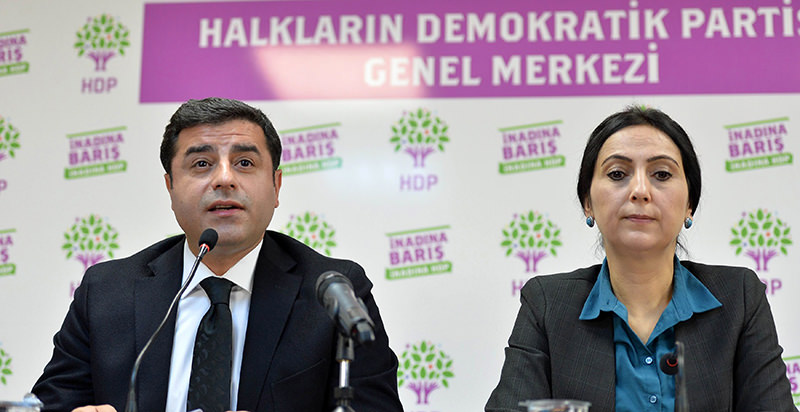 HDP co-chairs Selahattin Demirtau015f (L) and Figen Yu00fcksekdau011f (R) (AFP Photo)
by Daily Sabah Mar 04, 2016 12:00 am
The Justice Ministry submitted a request to the Prime Ministry on Friday, seeking to lift the parliamentary immunity for deputies from the Peoples' Democratic Party (HDP).

The Diyarbakır Chief Public Prosecutor's Office recently launched a probe into several HDP deputies, requesting to lift the deputies' immunity so they could be tried for "inciting hatred" and "being members of a terrorist organization."

Addressing reporters at Esenboğa Airport in Ankara prior to his official visit to Iran, Davutoğlu said sending motions to parliament was not political, it was a step concerning the security of Turkey.

Davutoğlu said supporting or justifying terrorism cannot be accepted by the public and reiterated that all the parties in the Parliament should unite against terrorism. He also called on HDP deputies to take a stand against their party's current attitude regarding terrorism.

Parliamentary sources expect that the summary of proceedings related to accusations of terrorist offenses will be on the parliamentary agenda in the coming weeks, after the current budget debates end.

The request was reportedly made concerning statements by HDP members' supporting PKK assertions of self-autonomy, which were made in December 2015 at the Democratic Society Congress (DTK). The probe was opened on the grounds of "making terrorism propaganda," "inciting a crime," and "encouraging sedition," in addition to violation of Article 302 of the Turkish Penal Code (TCK) by "disrupting the unity and territorial integrity of the state."

Demirtaş delivered a speech at the DTK in December during which he expressed support for Kurdish autonomy and self-rule in southeastern Turkey. "Hopefully the authorities will read this declaration one more time with calmness, and see that self-rule [and] autonomy offer a very significant opportunity for all of us in terms of living together," he said.

Demirtaş's statement received immediate criticism, yet Yüksekdağ quickly came to his defense. "Self-rule is a right," Yüksekdağ said, and claimed that Demirtaş's recent statements at the DTK and the declaration issued following the congress were of "historical significance." After these statements, criminal probes against the five HDP deputies were opened concerning "crimes against the constitutional order."

In the history of the Republic of Turkey, there have been 40 deputies whose legislative immunity was suspended and prosecuted. In 1994, the parliamentary immunity of seven pro-Kurdish Democracy Party (DEP) deputies was removed, due to their direct links with the PKK terror organization and "betrayal of the integrity of the state." In 1998, the parliamentary immunity of deputies from the center-right True Path Party (DYP) Sedat Bucak and Mehmet Ağar was removed, due to their involvement in corruption and criminal activities following the Susurluk scandal.