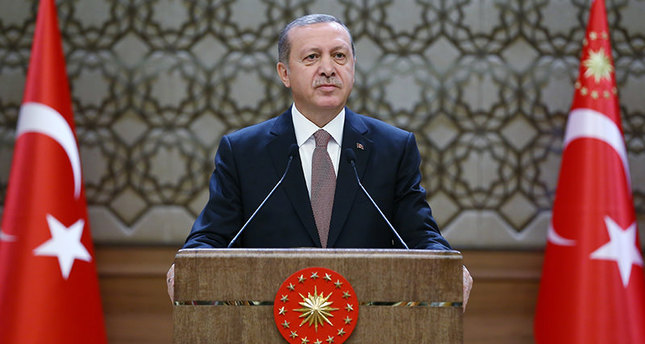 President Tayyip Erdoğan said on Tuesday the state should have an equal distance from all religious faiths following a call by the speaker of Turkey's parliament for a new constitution to drop references to secularism.

Erdoğan said in televised comments during a visit to Zagreb that the speaker, Ismail Kahraman, had been expressing his own views when he said Turkey needed a religious constitution. The proposal contradicts the founding principles of the Turkish republic, which is overwhelmingly Muslim but also secular.

"My views are known on this ... The reality is that the state should have an equal distance from all religious faiths ... This is laicism," Erdoğan said.

Kahraman's comments provoked opposition condemnation and a brief street protest on Tuesday. He later said his comments were "personal views".

Parliament Speaker İsmail Kahraman had suggested Monday to exclude secularism from a new constitution, which quickly caused controversy. "We have not discussed omitting secularism from the draft constitution. The parliament speaker does not speak on behalf of the [AK] party. Secularism is maintained in our constitution proposal," the chairman of the Parliament's Constitution Commission and AK Party Istanbul Deputy Mustafa Şentop said Tuesday.

Şentop underscored that excluding secularism has not been a question for the government.

Claiming that secularism is interpreted incorrectly, Kahraman said on Monday that there should be no such thing. "It should be a new and religious constitution. Secularism should not be in the new constitution," he said.

Another AK Party deputy for Istanbul and former Constitution Commission head, Burhan Kuzu, assured on his official Twitter account that secularism is included in the draft.

The current Constitution was drafted after the Sept. 12, 1980 coup and creates a variety of impediments to legislation. For this reason, the political parties in Parliament had already agreed on 60 articles for a new constitution in a previous iteration of the committee during the 24th legislative session. Due to the precedent set during the previous commission, the AK Party administration set a six-month time limit for the meetings to avoid deadlock.