Turkish parliament to discuss proposal regarding lifting immunity on May 16 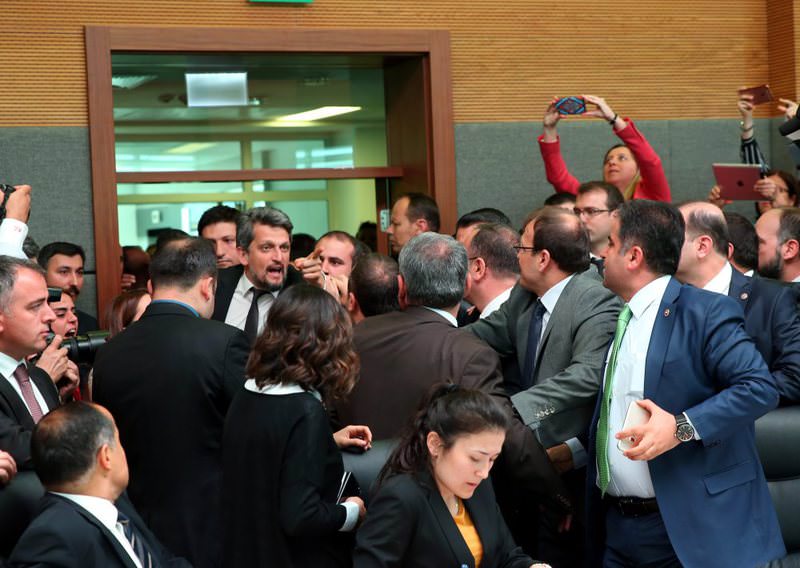 HDP deputies react violently as parliamentary constitutional committee discusses the lifting of immunities.
by Daily Sabah May 04, 2016 12:00 am

Despite efforts by HDP deputies to halt the works of a parliamentary commission, a bill seeking to remove immunity from prosecution of nearly a quarter of the country's deputies passed with the votes from three parties. The proposal is set to be discussed in Parliament on May 16

Late on Monday, a proposal to lift parliamentary immunity was approved with unanimous support from the Justice and Development Party (AK Party), Republican People's Party (CHP) and the Nationalist Movement Party (MHP).

On April 12, the ruling AK Party submitted a draft proposal to the parliamentary speaker's office to lift parliamentary immunity.

The proposal was signed by 316 AK Party deputies before submission.

"Turkey is conducting its largest and most comprehensive fight against terror to date, while some deputies made statements giving support to terrorism before or after being elected, some gave de facto support and help and some lawmakers called for violence, which created great public disgust," the draft said.

The proposal amends the constitution with a temporary clause to remove immunity from prosecution from 129 deputies in Parliament.

Prime Minister Ahmet Davutoğlu proposed in mid-March that Parliament should lift immunity from prosecution for all deputies and collectively review the 506 outstanding dossiers. With the dossiers waiting at the Justice Ministry and the prime ministry, the number of motions in Parliament is expected to reach 550. Turkish deputies are immune from prosecution while in office. The police can file "dossiers" against politicians, which can lead to a legal process once the lawmaker ceases to be a member of parliament.

The request to lift parliamentary immunity was first made concerning statements by HDP members' supporting PKK assertions of self-autonomy, which were made in December 2015 at the Democratic Society Congress (DTK).
Last Update: May 04, 2016 10:09 am
RELATED TOPICS