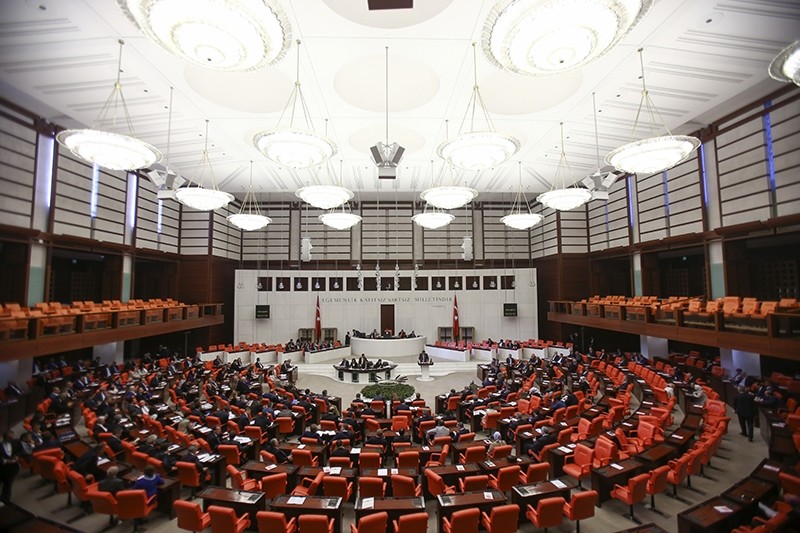 Turkish parliament approved on Tuesday to open the issue of parliamentary immunity for debate with 348 for, 155 against, eight abstentions and 25 blank votes.

14 MP's were absent during the voting.

Early Wednesday the first article of the proposal to lift immunities was approved with 350 for and 148 against votes while 5 MP's abstained from voting and 27 blank votes came out of the ballot box.

Later on, the 2nd article of the proposal to lift immunities was approved in the parliament with 357 for and 149 against votes.

Parliament began the first round of discussions of the Justice and Development Party's (AK Party) proposal to lift parliamentary immunities on Tuesday.

The second round of discussions will be held on May 20, in adherence to regulations that the second discussion cannot be held within the first 48 hours following the first.

As of Tuesday, the number of dossiers for the lifting of immunity has reached 667, in which 138 parliamentary deputies have dossiers drafted against them. A total of 51 dossiers were drafted against deputies from the Republican People's Party (CHP), 50 against deputies from the Peoples' Democratic Party (HDP), 27 from the Justice and Development Party (AK Party), 9 from the Nationalist Movement Party (MHP) and 1 dossier against an independent deputy.

All of them face the potential lifting of parliamentary immunity, with many other deputies having multiple cases opened against them. According to Article 175 of the Turkish Constitution, 367 affirmative votes are needed in order to enforce the decision without holding a referendum. If that number falls between 330 and 366 votes, the decision to hold a referendum will then be up to President Recep Tayyip Erdoğan.

The AK Party currently has 316 votes and needs support from the opposing parties. The co-chairman of the pro-PKK HDP, Selahattin Demirtaş, has the highest number of complaints against him in Parliament with 75 dossiers, including requests for the lifting of immunity on the grounds that Demirtaş's statements supported the PKK terrorist organization. Also, in July, HDP deputy Faysal Sarıyıldız was accused of supplying arms to the PKK.