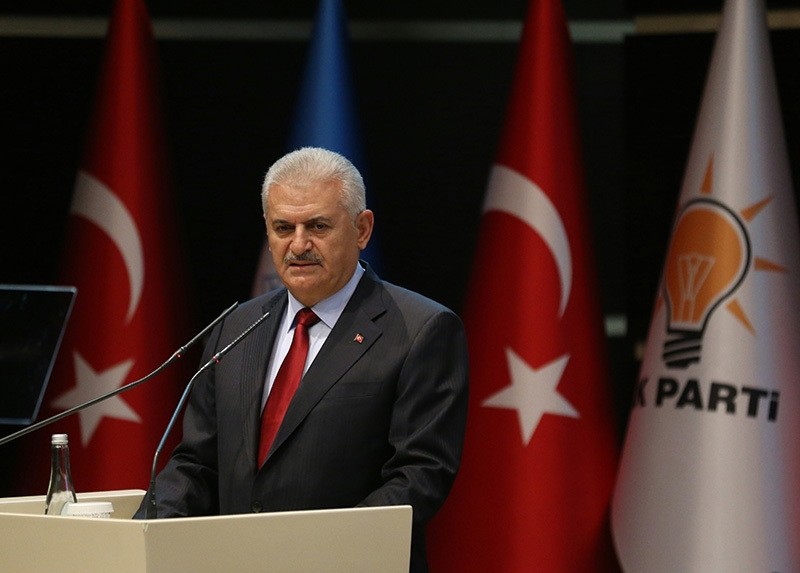 Prime Minister Binali Yıldırım said on Wednesday that the need for a new constitution in Turkey has become urgent under the current circumstances, saying the Justice and Development Party (AK Party) will soon bring the proposal, which includes the presidential system, to Parliament.

Speaking at the AK Party's Extended Provincial Chairpersons Meeting in Ankara, Yıldırım welcomed Nationalist Movement Party (MHP) Chairman Devlet Bahçeli's suggestion to introduce its own constitutional draft to Parliament. Describing Bahçeli's remarks on the presidential system and about the new constitution as "encouraging," Yıldırım said that a system change that will create a strong continuous political will and allow stability in the country is a necessity for Turkey. "So far, with other political parties, we have reached an understanding on over 60 articles of the new constitution. The AK Party will prepare the rest of the articles and will bring them to Parliament," Yıldırım said. "Whether it is passed by 330 votes or 367 votes, we will take the results to the people," he added, underlining that his party will give the people the last say on the issue.

"As the AK Party, we have been saying this from the beginning: we should turn this de facto situation in Turkey into law," Yıldırım added. Switching the parliamentary system to a presidential system has been a hot topic in Turkish politics since former Prime Minister Recep Tayyip Erdoğan became the country's first president elected by public vote in August 2014. Turkey's current constitution, which is called the 1982 Constitution, was drafted after the September 12, 1980 coup and even though several amendments have been made in the past, the general spirit of the 1982 constitution still maintains the restrictive mentality of a military junta regime and presents a variety of impediments to legislation.

Even though discussions about switching to a presidential system have re-flamed in the last two years, Turkish political history reveals that there were significant discussions about the presidential system in the years between 1972 and 1982, which were the years the parliamentary system in Turkey was not working well enough. Some conditional lawyers argue that the parliamentary system has caused crises and coups in Turkey. According to this view, between the years of 1950 and 2002, Turkey had 39 governments: In other words the country had a different government every 16 months due to the systemic crises caused by the Parliamentary system. Academics refer to the June 7 election in 2015 as the latest example of the crises caused by the parliamentary system's functionality. In last year's June 7 election, the AK Party had 41 percent of the total vote; however, the party could not get enough seats to form a government and therefore Turkey had to hold snap elections last November.

The ruling AK Party has been in favor of changing the constitution since 2011 and the party has advocated that the four parties that have seats in Parliament should make a new constitution. However, changing to a presidential system is opposed by Turkey's three other parliamentary parties.