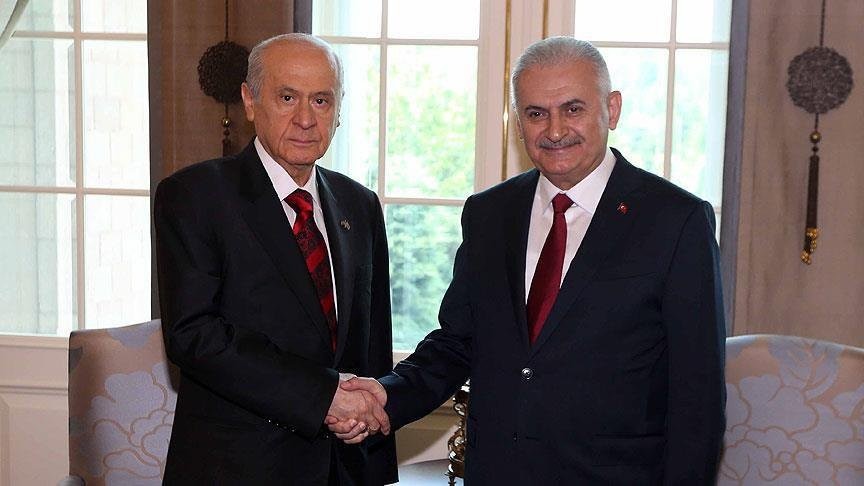 Amid ongoing debates on adopting a new constitution and a possible switch of the governing system, Prime Minister Binali Yıldırım and the opposition Nationalist Movement Party (MHP) Chairman Devlet Bahçeli met for a critical meeting that lasted an hour on Thursday at Çankaya Palace in capital Ankara.

After the meeting, Bahçeli expressed his views on Twitter, saying that the draft is "positive" and "reasonable."

Prior to the meeting, MHP Chairman Bahçeli had met President Recep Tayyip Erdoğan last week and addressed topics on the presidential system and the Constitution.

Prime Minister Yıldırım once more pledged on Thursday to leave the ongoing debates on the new constitution and governing system behind in the upcoming days, in an effort to further strengthen the country's democracy. Sources close to the Justice and Development Party (AK Party) have reported that the roadmap and schedule toward a new constitution and governing system was expected to be discussed in the Yıldırım-Bahçeli meeting.

MHP Chairman Bahçeli had signaled earlier last month that the party would support constitutional changes but only if they addressed party relevant politics and sensitivities. From that perspective, a highly placed AK Party source told Daily Sabah last month that two different constitutional amendment packages have been finalized and will be proposed to the MHP, solely built on three fundamental principles which are a full presidential system, check and balances and accountability.

The first package consists of 17 articles that include a full presidential system and articles that stipulate the regulations regarding parliamentary transition periods. The AK Party's second amendment package consists of 59 articles and is considered a more comprehensive package, designed to replace all articles of the current 1982 Constitution which was ratified by a military junta after the 1980 coup in Turkey.

On that view, sources close to the AK Party have indicated that a possible referendum may be held sometime in April or May next year. The source had also stated earlier last month that "with these proposals, neither the president will dominate the Parliament nor will Parliament have the power to block the system," the proposals suggest that all the ministers have to be chosen among non-parliamentarian figures. Moreover, if one parliamentarian is appointed as minister, his/her deputyship will end automatically, the proposals suggest.

According to the possible proposals, the president will be held accountable for the decisions and orders like prime ministers. The AK Party source had also indicated that the party was planning to drop the election threshold to five percent from the current 10 percent and change the election system to a single-member district system. After switching the system to a presidential one, AK Party officials expect President Erdoğan's continuation of duty without having a new presidential election.