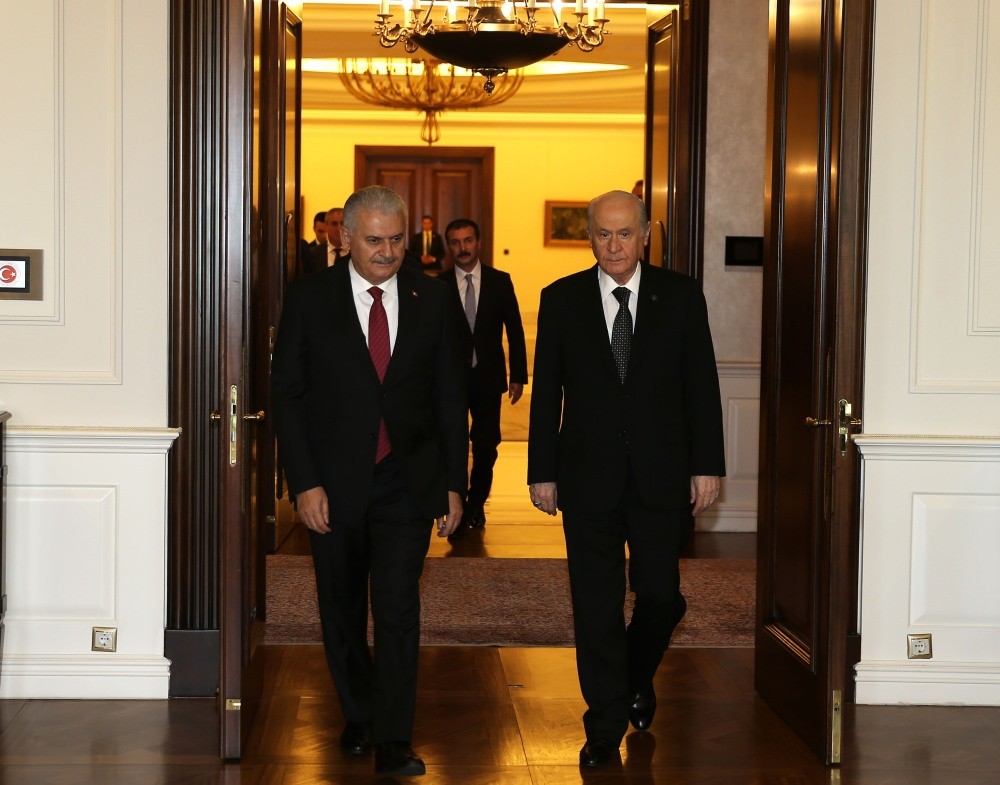 After the leaders of the ruling AK Party and opposition MHP met in Ankara, the details of Turkey's long debated constitutional change started to reveal itself. While the first package, which is expected to be a comprehensive reform package is said to be comprised of 100 articles, the second one, relatively brief will consist of 30-40 articles, also to include the Presidential System and related articles

Uncertainty over Turkey's long-debated new constitution that will allow the parliamentary system to change to a presidential one has ended after Prime Minister and Justice and Development Party (AK Party) Chairman Binali Yıldırım and opposition Nationalist Movement Party (MHP) leader Devlet Bahçeli principally agreed on the AK Party's constitutional proposal during a critical meeting on Thursday at Çankaya Palace in capital Ankara. Henceforth, the proposal of the new constitution will likely come to Parliament in December to a public referendum for constitutional change which is expected to be held next April. Discussions over Turkey's long-debated constitutional change that will switch the parliamentary system to a presidential one was reignited in recent weeks after MHP Chairman Bahçeli signaled earlier last month that the party would support constitutional changes only if they addressed party-relevant politics and sensitivities. AK Party Chairman Yıldırım and MHP's Bahçeli ended the uncertainty after holding a critical meeting in Ankara on Thursday. After the meeting, Bahçeli expressed his views on Twitter, saying that the draft is "positive" and "reasonable." Commenting on the meeting, Yıldırım said on Friday that the AK Party will change Turkey's Constitution to bring in a presidential system with help from the MHP.

"We will make the constitutional change with the MHP and put the presidential system into effect," Yıldırım said in Turkey's northeastern Trabzon province while praising Bahçeli for taking responsibility toward solving this important issue.

Neither Yıldırım nor Bahçeli shared further details of the meeting. However, political sources said that in the meeting Yıldırım presented two different constitutional reform packages to Bahçeli. Accordingly, the first, a comprehensive reform package, is said to be comprised of 100 articles. The comprehensive package foresees reform in matters ranging from the presidential system to the judiciary and constitutional institutions. In the meantime, the second package, a relatively brief one, consists of 30-to-40 articles. The articles for the presidential system and related articles are included in the relatively brief package.

Reportedly, Yıldırım elaborated on the system and explained the proposition in detail to Bahçeli and both parties who evaluated which package would be viable. Sources reported that in the meeting, discussions were mostly concentrated on the brief package; due to the upcoming schedule of the General Assembly of the Turkish Parliament. Sources also said that both leaders discussed the renewal of the presidential system as "consolidated presidency."

Henceforth, the MHP will review the proposition and give feedback to the AK Party about the articles that need changes. Considering the feedback, the AK Party will try to revise the proposition. While the reviews are expected to be concluded within a week, it might take more time. Sources also indicated that after the MHP's revision the final draft of the new constitution might come to Parliament in December and a public referendum for constitutional change is expected to be held next April.

Meanwhile, President Recep Tayyip Erdoğan said on Thursday that establishing an authentic, Turkish-style presidential system is both possible and necessary for Turkey. "Let's establish a Turkish-style presidential system for Turkey. This will give our country an opportunity to develop much faster and I defend it," Erdoğan said in an interview with Al-Jazeera while adding that Turkey failed during the period when coalition governments ruled the country.

Discussions over the Turkish-style presidential system have taken place in recent months and the opposition parties vehemently objected to the proposal of this system, arguing that it will lack of checks and balances and will lead Turkey toward an authoritarian, one-man regime. However, sources indicated that both of the AK Party's proposal packages were built on fundamental principles such as checks and balances and accountability. Accordingly, the AK Party's presidential system will include a unicameral Parliament as opposed to a bicameral one, which is typically seen in countries with an existing presidential system. Furthermore, there will be an effective separation of powers, along with an extensive checks and balances mechanism.

In accordance with the reformed separation of powers principle, Parliament will have the duty of overseeing the president's actions, to a certain extent. Both drafts also aim to minimize the possibility of confrontation of legislative and executive power.

The current Constitution states that no appeal shall be made to any judicial authority, including the Constitutional Court, against the decisions and orders signed by the president. Both of the AK Party's proposals change this article and hold the president accountable for the decisions and orders like prime ministers. In addition, the proposals suggest that all the ministers have to be chosen from among non-parliamentarian figures. Moreover, if one parliamentarian is appointed as minister, his/her term as deputy will end automatically, the proposals suggest.

Even though both leaders are mostly concentrated on the brief package, sources indicated that the AK Party's comprehensive constitution package aims to introduce major reforms. Accordingly the more comprehensive package includes changes ranging from the judiciary to the Council of Higher Education. According to the package, half of the members of the Constitutional Court and High Council of Judges and Prosecutors will be appointed by the president, while the remaining half will be selected by Parliament.

Moreover, the controversial Council of Higher Education will no longer be a constitutional institution. The constitutional article will be changed to state that "if need be, a structure regarding university administrations might be implemented." The National Security Council, another controversial institution, might also be abolished.
Last Update: Nov 11, 2016 10:10 pm
RELATED TOPICS