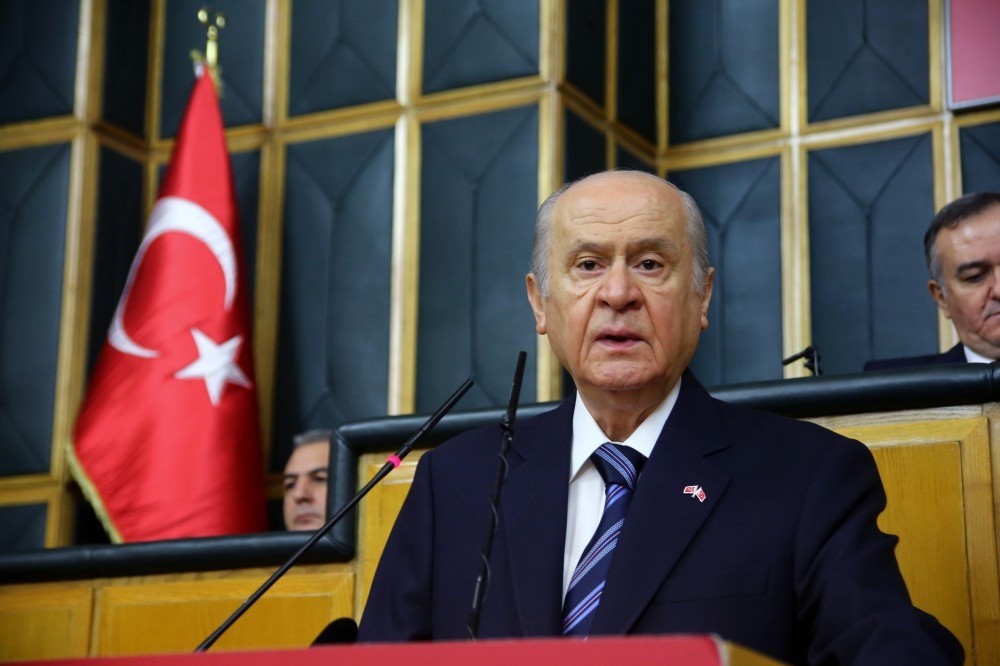 Opposition MHP Chairman Devlet Bahçeli confirmed yesterday that his party received the AK Party's constitutional proposal and would work on the items, which are expected to open the way for a presidential system in Turkey

Chairman of the Ruling Justice and Development Party (AK Party) Prime Minister Binali Yıldırım announced on Tuesday alongside opposition Nationalist Movement Party (MHP) leader Devlet Bahçeli that they had reached an agreement on the proposed presidential system. Prime Minister Yıldırım added that the minor details of the system were still a work in progress while he also urged the leader of main opposition Republican People's Party (CHP) Kemal Kılıçdaroğlu to cooperate in the development of the new Turkish constitution. MHP Chairman Bahçeli confirmed on Tuesday that his party had received the AK Party's constitutional proposals.

Bahçeli said the MHP is ready to work on the itemized details of the draft of the constitution, first with MHP deputies and later in an inter-party parliamentary commission.

"As the MHP, we remain hyper vigilant in efforts to complete our work on the proposal as well as on defining the points of agreement and points of disagreement in the articles," Bahçeli said while speaking at his party's weekly group meeting in Parliament. ''We hope to submit the agreed items to the General Assembly in Parliament as soon as possible but the rest is up to Parliament and the will of the nation.''

Bahçeli also called on CHP leader Kılıçdaroğlu to work "hand-in-hand" on the new constitution, encouraging leaders to "free Turkey from its shackles and overcome the obstacles one by one to focus on the main agenda of the Turkish nation.'' He went on to praise Kılıçdaroğlu for recent remarks indicating the CHP's "open door to the exchange of views."

Prime Minister Yıldırım also expressed similar thoughts, saying that after reaching an agreement with the MHP on the new constitution he expects the CHP to join the negotiations.

"Although the MHP stated that they are in favor of a parliamentary system under the current circumstances that they did not maintain their objection and we have agreed on constitutional amendments whose scope is limited only to governmental changes,'' the prime minister said on Tuesday in Parliament.

Yıldırım also urged CHP leader Kılıçdaroğlu to cooperate with the AK Party and MHP, asserting that, "The CHP leader says its doors are open and on that same note, our doors are never closed to negotiations. You [Kılıçdaroğlu] still have time to catch this train while you still can."

The prime minister also refuted the CHP leader's claims that the constitutional changes equal to a shift to a regime, clarifying that, "The regime argument ended in 1923 [when Turkey was declared a Republic]. No one is threatening the Turkish Republic. If the Republic were being contested, the AK Party would be the first to revolt. We want to reform the constitution, not form a regime."

Kılıçdaroğlu, while addressing his party in Parliament, also went on to allege that the AK Party was seeking to turn the Republic into a dictatorial regime.

The constitutional proposal is expected to be submitted to Parliament in the coming days after the inter-party commission completes its works. According to parliamentary sources, the Turkish-style presidential system will include a unicameral parliament and, unlike the French semi-presidential system, the Turkish prime minister will have no role in the new system.

Thus, after the constitutional change comes into effect, most probably in next April, current Prime Minister Binali Yıldırım is expected to resign to allow President Recep Tayyip Erdoğan to form a new cabinet that includes ministers appointed from non-parliamentary roles. Sources also indicate that both the AK Party and MHP do not plan to hold an early election after the constitutional changes are implemented, with both presidential and parliamentary elections expected to be held in 2019.
Last Update: Nov 16, 2016 1:07 am
RELATED TOPICS