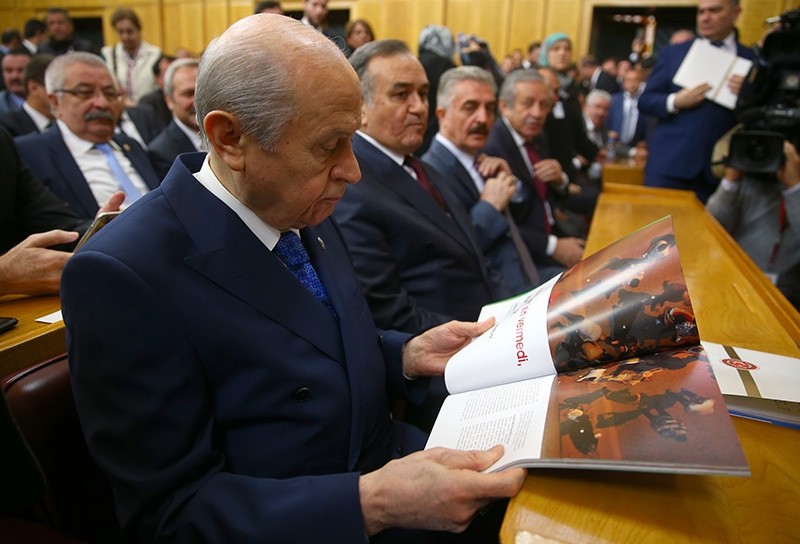 MHP Chair Devlet Bahu00e7eli looks at a magazine in which July 15 coup attempt photos are compiled by Photo Correspondents Association of Turkey before his speech in MHP group meeting. (AA Photo)
by Merve Aydoğan Nov 22, 2016 12:00 am

Upon the ruling Justice and Development Party (AK Party) submitting a draft legislation proposal to the opposition Nationalist Movement Party (MHP) last week, the two parties have entered an assessment phase for the establishment of a new constitution that will allow a change from the parliamentary to a presidential system.

Secretary-General Abdülhamit Gül from the AK Party and MHP representative Mehmet Parsak have held the first set of assessment meetings regarding the proposal, which will be held in the coming days until the parties reach a final agreement. Speaking at his party's weekly parliamentary group meeting on Tuesday, MHP Chairman Devlet Bahçeli said, "We think the problems in the new constitution bill will be overcome through talking and we will overcome factual obstruction with judicial intervention," as he announced that they had reached a broad agreement on the proposal.

While the information obtained from yesterday's meeting between Gül and Parsak indicates that the two party officials have agreed to move forward using a "staircase method," the MHP's Bahçeli confirmed this, saying, "The only way to recover Turkey from a highly important and urgent matter is through a 'staircase' method, by moving up the stairs slowly and surely."

Discussions over Turkey's long-debated constitutional change that will allow the parliamentary system to switch to a presidential one have reignited in recent weeks since MHP Chairman Bahçeli indicated last month that the party would support constitutional changes only if they address politics and sensitive issues directly relevant to the opposing party. Prime Minister Binali Yıldırım has previously stated that the AK Party had presented two different constitutional reform packages to the MHP. Both parties agreed on a brief package that includes 12 articles, according to Bahçeli's statements, though he noted, "When we [MHP] consider Turkey's worsening domestic issues, we see that we do not have any more choices," while adding that some issues within the draft bill need to be resolved. Responding to a question after the party's group meeting, Bahçeli stressed that no details on AK Party talks will be disclosed for the benefit of discussions, as he said there are 12 articles in the draft bill.

Describing the AK Party's proposal as "reasonable," the MHP chairman continued: "We have completed our work on the draft bill that was presented to us after long hours of effort. Of course, there are matters we agreed upon, as well as those that were points of contention. However, we believe that we can overcome all obstacles by communicating and potentially end the physical [political] deadlock through judicial interference." With that in mind, MHP legal experts under Parsak's chairmanship have compiled a comprehensive report on the draft bill which was presented to Bahçeli Monday evening.

After assessment meetings and discussions are held on the draft bill, leaders from both parties will make the final decision and it is expected to be presented in parliament for a vote next week, if a final agreement is reached. Once the bill comes to parliament, if a total 330 votes or higher is reached, a referendum will be held for the public to make the decision. A recent survey held by the MAK Consultancy has revealed, in fact, that 65 percent of voters support a referendum.

'Remnants of PKK have begun to take over CHP'

The MHP chairman continued his remarks by strongly criticizing the main opposition Republican People's Party (CHP) for attending the PKK-affiliated Peoples' Democratic Party (HDP) demonstrations in Istanbul's Kartal district. Bahçeli stated that the CHP was on show in the same framework as "separatists," stressing that the CHP stands with the "HDP, the DHKP-C [the Revolutionary People's Liberation Party-Front] and many other separatists." Reiterating that CHP showed support to HDP during elections so that the PKK-affiliated party could pass the election threshold, Bahçeli said, "The remnants of the PKK within the CHP have begun to take over the party." Stressing that the CHP must find intra-party solutions to resolve Turkey's issues rather than taking an antagonistic stance against the MHP, he added, "They [the CHP] are not ashamed to walk on the same path with the murderers of our martyrs."