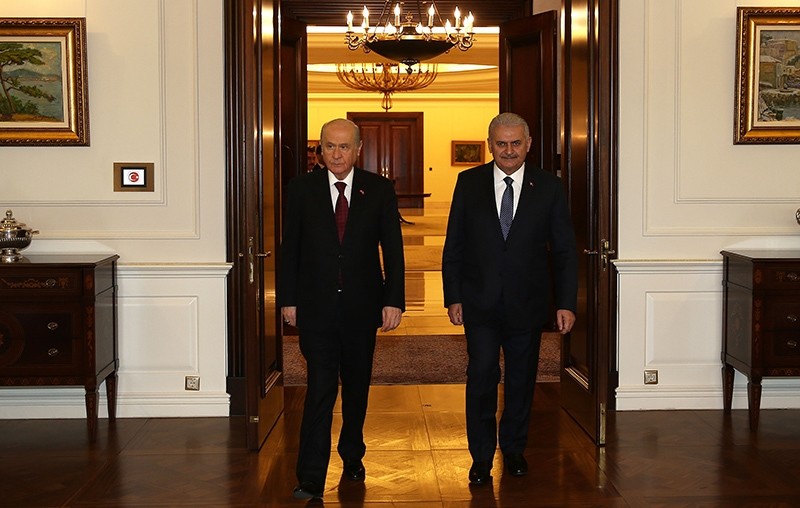 The Justice and Development Party (AK Party) and the opposition Nationalist Movement Party (MHP) have finalized negotiations on proposed amendments to the constitution, which include changing the current parliamentary system to a presidential system, in an effort to establish more effective and dynamic governance.

Prime Minister Binali Yıldırım and MHP Chairman Devlet Bahçeli held a press conference at the Çankaya Prime Ministerial Office in Ankara yesterday, during which Yıldırım said the proposed draft constitution will be submitted to Parliament next week.

Bahçeli said both parties put in extensive effort during negotiation talks on the draft constitution and that a positive result has been achieved after meeting with the prime minister yesterday.

"The constitutional changes have been on our people's agenda. The negotiations with the MHP have reached a mature stage. We will be submitting the draft proposal to Parliament next week. Of course, after that it is Parliament's decision. The number of votes necessary is 330 so that it can be taken to the people in a referendum and the referendum process is the decision people will make," Yıldırım said, adding that the aim is to not waste anymore of people's time with the issue of the system change.

The AK Party has argued that the current presidential system, in which the people choose the president through elections, is not suitable for the current constitution, and through the new amendments, the presidential role and responsibilities will be better defined. Prime Minister Yıldırım added that, as a result of the new definition of the president, more effective political stability and trust will be established in Turkey's future.

Yıldırım added that the final draft that will be submitted to the government will be the final outline that both parties have agreed upon. After the draft is presented to Parliament, a referendum will be held for the public to make the final decision if a total of 330 votes or higher is reached. Parliament is expected to debate the amendments early next year and the referendum may be held in April.

Responding to whether there will be early elections, Yıldırım said the next elections will be held in 2019, as planned. As a result, President Recep Tayyip Erdoğan is also expected to remain in position until 2019, despite changes to the system.

With the new governing system, non-parliamentarians may be appointed as ministers and will not need a vote of confidence as they will be appointed by the president.