Referendum for new constitution in spring as gov't, MHP on same page 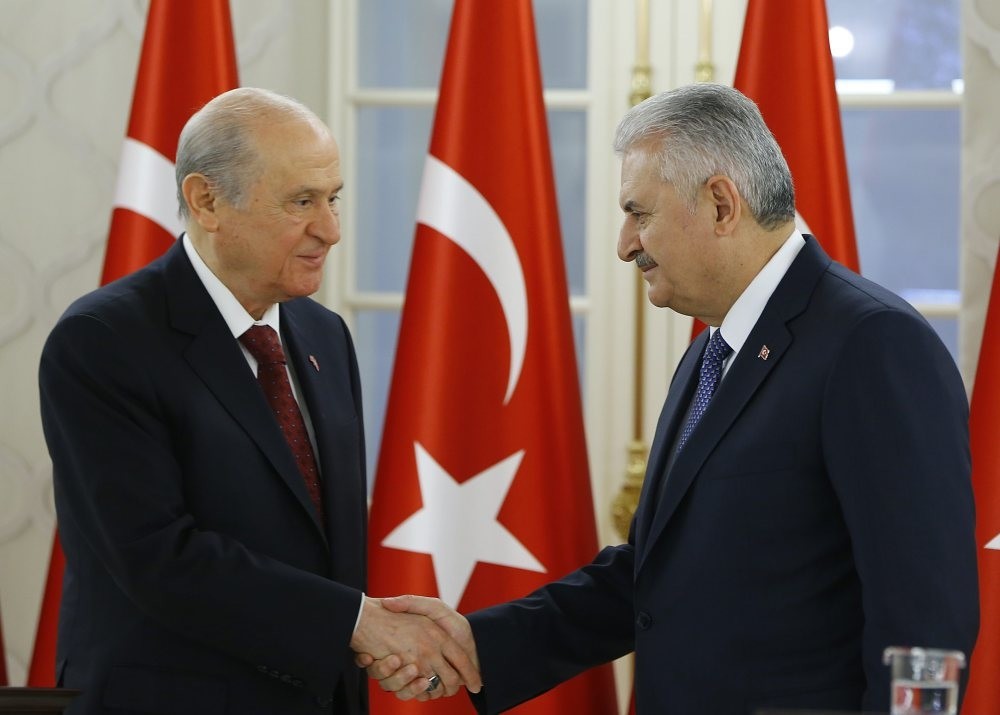 A referendum for the constitutional package is expected to be held in early April with the AK Party and the MHP are on the same page. AK Party Group Deputy Chair Turan told Daily Sabah that it will be submitted to the parliamentary speaker's office in the next few days

A referendum for the new Turkish Constitution is expected to be held in early April as the Justice and Development Party (AK Party) government and the Nationalist Movement Party (MHP) affirm that there are no outstanding problems and the two parties are on mutual terms. A constitutional draft is expected to be submitted to the office of Parliamentary Speaker İsmail Kahraman in a few days, as a result of the agreement reached between the AK Party and the MHP on a 12-article amendment package. On his way to Moscow for an official visit with Russian President Vladimir Putin, Prime Minister Binali Yıldırım assured that the two parties had found common ground and the package would be presented this week.

AK Party deputy and Parliamentary Constitution Commission Chairman Mustafa Şentop said in a televised interview yesterday that the constitutional changes will be brought to a referendum in early April. There are also speculations that the referendum could take place on April 23, National Sovereignty and Children's Day.

"We, as the AK Party, would like to remove this from the agenda of the people by presenting the constitutional amendment package to the parliamentary speaker's office in the next few days," he said.

Şentop addressed speculations that some AK Party or MHP deputies could possibly vote against the constitutional changes, saying: "The AK Party has 316 [parliamentary] votes and the MHP has 36 deputies [in Parliament]. Therefore, I do not think that there is going to be a surprise," he asserted.

Amid speculations that the number of deputies in Parliament could be increased from 550 to 600, Şentop said that the AK Party and MHP consider these speculations to be more accurate. He also asserted that the age requirement for deputy selection will be changed from 25 to 18.

Turan said that the ban on presidents distancing themselves from their parties is an implementation from the May 27 coup. "Presidents used to have political ties. We do not have to be governed by a system that is created by putschists and a source of crises," he said, recalling that Turkey has experienced problems in the past due to disputes between presidents and prime ministers.

Regarding public support for the new presidential system, Prime Minister Yıldırım recently said that the public has shown an increasing amount of support for the change. As soon as the bill enters Parliament and receives the minimum 330 parliamentary votes required, it will be brought to a referendum in which the Turkish public will make the final decision on what will happen in the spring of 2017.

According to a survey conducted recently by the A&G consultancy firm, the support for the constitutional change is at 52.9 percent. While 90.6 percent of AK Party supporters welcome the reconciliation between the two parties, the A&G survey also revealed an interesting result: 84.2 percent of main opposition Republican People's Party (CHP) voters also welcomed the agreement reached on the presidential system proposal.

The government has long sought to replace the current parliamentary system with a presidential one, saying there are flaws in the structure of the constitution, which hold Turkey back from developing as a nation.

Prime Minister Yıldırım said that the proposed changes could be brought to a public referendum even if the government receives the required 330 votes in Parliament.

The new constitutional draft requires 330 votes to pave the way for a referendum.

Last week, AK Party deputies began signing the proposal for the new constitution and Yıldırım, alongside MHP Chairman Devlet Bahçeli, announced that an agreement has been reached between the two parties on the outline for the constitutional amendments.
RELATED TOPICS