Comparison of 1982 Constitution to changes offered in new package 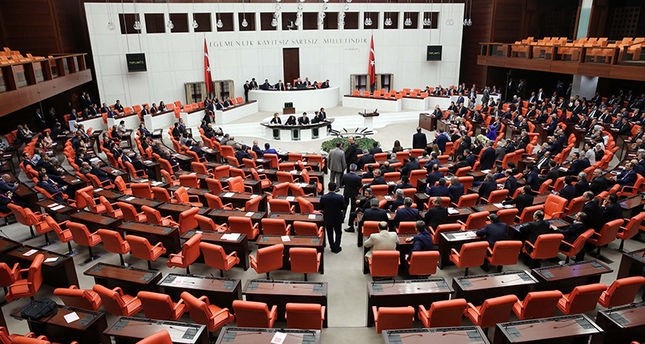 The 18-article bill proposing a wide range of consitutional changes was approved in a parliamentary committe that will bring an executive presidency. It will lower the age of candidacy for Parliament from 25 to 18, and increase the number of parliamentarians from 550 to 600

Following 10-day-long discussions, the Parliamentary Constitutional Committee approved a bill early on Friday proposing a set of constitutional changes, including a switch to a presidential system of governance in Turkey. While the final meeting of 2016 was the lengthiest, with 17 hours of discussion, the proposed constitutional bill was reduced to 19 articles; it was initially 21 articles and had passed the committee with 316 votes from the ruling Justice and Development Party (AK Party). The bill is now expected to be put to a vote in Parliament during the second week of January, and there will be two rounds of voting in which the deputies first vote on each article and then vote for the package as a whole.

Despite the AK Party being a majority in Parliament, it does not have enough lawmakers to take the proposal to a referendum. The draft constitution needs at least 330 votes in a secret parliamentary ballot to pave the way for a referendum. The AK Party and opposition Nationalist Movement Party (MHP) agreed on the details of the new amendments to the Constitution, allowing the AK Party to swiftly move forwards towards a possible referendum next spring.

Existing: This article lists criteria for eligibility to become a deputy, such as"reaching age 25," educational level, legal records of criminality as well as who can and cannot become a deputy, including "those who have not completed their mandatory military service."
Changed to: The age is changed from 25 to 18, and the military service related criteria are changed to "those who have no relationship with military service."
Explanation: The new change aims to enhance political participation by younger people in Parliament.

Existing: The prime minister is the head executive in the current system. Ministers chosen by him are offered a vote of confidence and approved by the president.
Changed to: The president appoints vice presidents and ministers and cease their duties. Also, if he deems it necessary, he makes an opening speech in the Turkish Grand National Assembly. He may give a message about the country's internal and external politics, issue laws and will send laws back to the assembly for review.
Explanation: Since the Council of Ministers has been abolished, the president becomes both the head of state and the head of the executive. The president cannot prepare draft law, but he can give his message to Parliament about the laws he wants. The president is empowered to appoint and dismiss ministers.

Existing: Judicial authorities, including the Constitutional Court, cannot be resorted to against decisions and orders personally prescribed by the president. The president can only be sued for treason and can be founded guilty by a three-fourths majority.
Changed to: The assembly will discuss the proposal within one month at the latest and may decide to open an inquiry for any crime by secret ballot by a three-fifths majority.
Explanation: It will bring criminal liability to the president, as he can be held responsible for his or her actions in relation to his duties and is charged by Parliament and adjudicated in the Supreme Criminal Tribunal.

Existing: The president of the Turkish Grand National Assembly shall act as the president and shall use that authority during times when the president is temporarily absent from his duties, such as illness or going abroad, or if his seat is vacated due to death, withdrawal or any other reason.
Changed to: The Grand National Assembly of Turkey and the presidential elections are held every five years on the same day.
Explanation: If the office of the presidency is vacated, the election will take place within 45 days, and the deputy will act as the head of state. Unlike the present ruling, the vice president substituted for the, not Head of the Parliament. 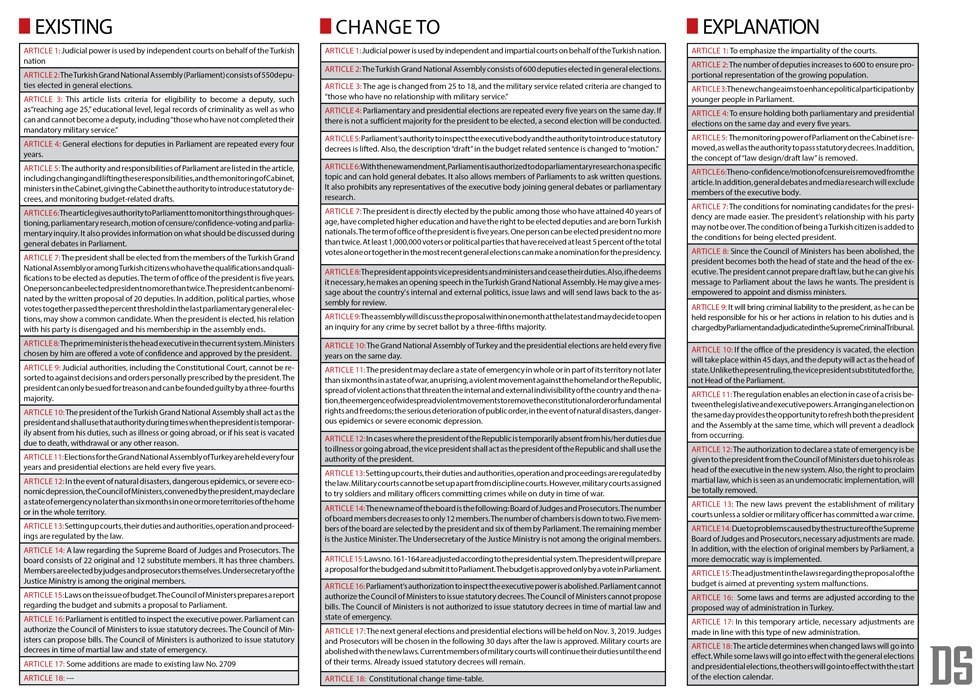 Existing: Elections for the Grand National Assembly of Turkey are held every four years and presidential elections are held every five years.
Change to: The president may declare a state of emergency in whole or in part of its territory not later than six months in a state of war, an uprising, a violent movement against the homeland or the Republic, spread of violent actions that threaten the internal and external indivisibility of the country and the nation, the emergence of widespread violent movements to remove the constitutional order or fundamental rights and freedoms; the serious deterioration of public order, in the event of natural disasters, dangerous epidemics or severe economic depression.
Explanation: The regulation enables an election in case of a crisis between the legislative and executive powers. Arranging an election on the same day provides the opportunity to refresh both the president and the Assembly at the same time, which will prevent a deadlock from occurring.

Existing: In the event of natural disasters, dangerous epidemics, or severe economic depression, the Council of Ministers, convened by the president, may declare a state of emergency no later than six months in one or more territories of the home or in the whole territory.
Changed to: In cases where the president of the Republic is temporarily absent from his/her duties due to illness or going abroad, the vice president shall act as the president of the Republic and shall use the authority of the president.
Explanation: The authorization to declare a state of emergency is be given to the president from the Council of Ministers due to his role as head of the executive in the new system. Also, the right to proclaim martial law, which is seen as an undemocratic implementation, will be totally removed.

Existing law: A law regarding the Supreme Board of Judges and Prosecutors. The board consists of 22 original and 12 substitute members. It has three chambers. Members are elected by judges and prosecutors themselves. Undersecretary of the Justice Ministry is among the original members.
Changed to: The new name of the board is the following: Board of Judges and Prosecutors. The number of board members decreases to only 12 members. The number of chambers is down to two. Five members of the board are selected by the president and six of them by Parliament. The remaining member is the Justice Minister. The Undersecretary of the Justice Ministry is not among the original members.
Explanation: Due to problems caused by the structure of the Supreme Board of Judges and Prosecutors, necessary adjustments are made. In addition, with the election of original members by Parliament, a more democratic way is implemented.

Existing laws: Laws on the issue of budget. The Council of Ministers prepares a report regarding the budget and submits a proposal to Parliament.
Changed to: Laws no. 161-164 are adjusted according to the presidential system. The president will prepare a proposal for the budged and submit it to Parliament. The budget is approved only by a vote in Parliament.
Explanation: The adjustment in the laws regarding the proposal of the budget is aimed at preventing system malfunctions.

Existing laws: Some additions are made to existing law No. 2709
Changed to: The next general elections and presidential elections will be held on Nov. 3, 2019. Judges and Prosecutors will be chosen in the following 30 days after the law is approved. Military courts are abolished with the new laws. Current members of military courts will continue their duties until the end of their terms. Already issued statutory decrees will remain.
Explanation: In this temporary article, necessary adjustments are made in line with this type of new administration.