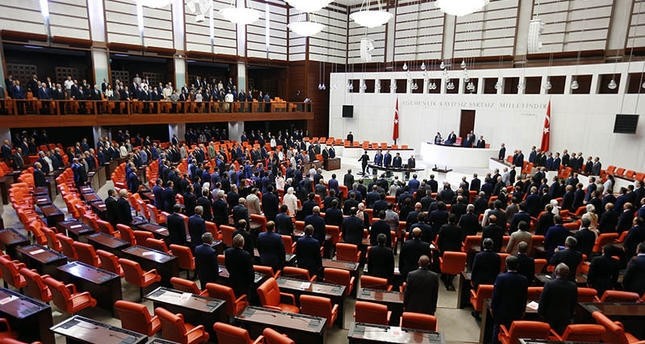 by Ali Ünal Jan 02, 2017 12:00 am
Turkey's search for a new constitution has been on the agenda of the country for decades, but in 2016 this pursuit gained new momentum with the submission of a constitutional amendment package to Parliament. In 2017, if Parliament accepts the amendment package, the public will vote on it in a referendum, and as a result, Turkey is likely to turn its governmental system into a presidential one next year. Turkey's current 1982 Constitution, drafted after the military coup that year, strongly reflects the statist and tutelary mentality of its military founders and therefore has been the subject of strong criticism since its adoption. To improve its democratic standards, the Constitution has undergone 17 amendments in the last three decades. However, none of these amendments changed its tutelary character nor satisfied public demand for a new civilian constitution.

Thus, Turkey started 2016 in search of a new constitution. Following the Nov. 1 general election in 2015, the ruling Justice and Development Party (AK Party) started discussions with the opposition Republican People's Party (CHP) and the Nationalist Movement Party (MHP) in January. However, in the third meeting of the Parliamentary Constitution Conciliation Committee on Feb. 16, the CHP decided to withdraw from the committee due to discussions concerning a presidential system and thereby broke the consensus to draft a new constitution. Even though Parliament Speaker İsmail Kahraman sent a letter on Feb. 25 to CHP leader Kemal Kılıçdaroğlu to urge his party to return to the Constitutional Conciliation Committee without putting forward any preconditions, the CHP refused and said it would continue to withdraw its support as long as a presidential system was on the table. Therefore, since March, the ruling AK Party started looking for other options, such as bringing its own constitution proposal to Parliament. However, this issue did not become a top priority at the AK Party's congress that took place in May. Ahmet Davutoğlu, whose party won 50 percent of the vote on Nov. 1, 2015, in early May decided not to run as a candidate at his party's extraordinary congress. At the extraordinary congress of the AK Party on May 22, Binali Yıldırım was elected the new chairman of the AK Party. After the July 15 Gülenist coup attempt, the political parties started another round of discussions in August to agree on a mini-constitution legislative package to arrange urgent amendments during the post-coup period; nevertheless, little resulted from these talks.

Details of the 18-article bill indicate that the reform package will not only change the Constitution and governing system but also initiate new reforms that will be significantly important to the democratization process in the country. The bill would abolish the prime ministry and allow the elected president to maintain ties with his/her own party. Accordingly, the president will be elected by public vote and will be able to serve two five-year presidential terms. In addition, it allows Parliament to set up an investigation commission and even begin impeachment proceedings against the president. In line with Europe, the bill also reduces the age of candidacy from 25 to 18; and in the context of the growing populace, the number of deputies in Parliament will increase from 550 to 600.

The package includes articles that would decrease the size of the National Security Council (MGK), remove the gendarmerie forces from the MGK and abolish the military high courts to help eradicate discriminatory practices between the military and civil courts. In addition, Parliament and the president would be authorized to select members of the HSYK to remove members of the Gülenist Terror Group (FETÖ) from within the judiciary. In line with the agreement, the bill would also alter the structure of the HSYK. The new HSYK would consist of 13 members: seven elected by parliamentary vote, while the president would select the remaining six. The bill would also allow the Turkish Armed Forces (TSK) to be open to civilian oversight through the Presidency-led State Supervisory Council (DDK). The president, also known as the commander-in-chief, would be able to appoint the TSK's chief of general staff under the new governing system.

If the proposal is passed in Parliament and voted for by the public in a referendum, Turkey will undergo a transitional period until 2019 when the new system will come into full effect. Moreover, during this period, there will be no early elections and both presidential and parliamentary elections will be held on the same day in 2019 and every five years thereafter. Even though Turkey's search for a new constitution is not finished yet, the new 18 articles of the constitutional amendment package would allow Turkey to switch to a presidential system and likely solve the chronic problems of the current system.
Last Update: Jan 02, 2017 9:06 am
RELATED TOPICS